First up, an aside: if you have been here before, and have seen one of my previous map entries (here and here) you are probably aware of this already. On the other hand, if you are popping in here for the first time, possibly from a Google search or something, I feel I should give you fair warning--these maps are fictional. They do not depict the real world, either currently or at any point in history. They are merely thought experiments. Kids, do not use them as a basis for your research papers.


And now: some maps of South America!


In this world, the Bourbon Reforms of the 18th century turned out slightly differently--most notably, the borders between the Viceroyalty of Peru and the new Viceroyalty of the Río de la Plata were drawn somewhat differently, with most of Upper Peru remaining with the former. The French Revolution and the Napoleonic Wars occur much as they did in our world, but the Latin American wars of independence proceeded differently, as the differences in the Bourbon reforms resulted in some different dynamics within the three Viceroyalties of New Granada, Peru, and the Río de la Plata. Paraguay does not secede from La Plata, and the Royalist position in Peru is stronger.

In fact, Spain never quite loses control of the Viceroyalty of Peru, although the end of the wars in 1825 sees new independent republics in Chile, New Granada (renamed Gran Colombia) and the new United Provinces of the Río de la Plata.

Two of these three were fated not to last. As in our world, Venezuelans grew dissatisfied with their position within Gran Colombia, but in this world their grievances were left to simmer longer, and rather than peacefully dissolving into its constituent pieces, the Gran Colombian government fought a bloody and unsuccessful war to prevent Venezuela from leaving.

The United Provinces fared somewhat better for a time. Larger and stronger than the Argentine Confederation of our world, it fared better in a war against Brazil, recovering the lost Banda Oriental as well as a chunk of Mato Grosso province. But as in our world, there was tension between Federalist and Unitarian factions regarding the influence of Buenos Aires and the revenues it generated. The Federalists, strongest in the richer southern provinces, wanted to retain these revenues, while the northern provinces wanted a unitary government that would distribute them more evenly.

An rather odd war followed, in which the south basically fought to expel the northern provinces. These formed the Confederation of Tucumán, Paraná, and Paraguay, more commonly known as the Paranian Confederation. Ironically, without the prize of Buenos Aires, the former Unitarians found that a federal model better suited their new nation, while the United Provinces have become increasingly centralized.

Chile, alone of the new republics, managed to avoid any wars, but its leaders were less foresightful than our world, and Chile failed to establish claims to the area around the Straits of Magellan. Instead, these and much of uninhabited Patagonia fell to the French government, who established a number of settlements in the area, following the recommendations of the French explorer Jules d'Urville. Britain, which had also expressed interest in the region, had to satisfy itself with the Falkland Islands, re-establishing its earlier claim while the United Provinces were otherwise occupied.

Now, 50 years after the end of the wars of independence, the course of South American history has diverged significantly from our world... and will diverge further in just a few years with the untimely death of Dom Pedro II of Brazil... 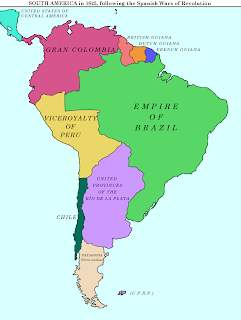 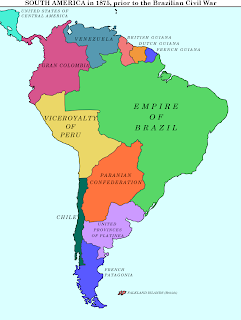 Next up: just a little something I was playing around with in GIMP, trying for a "historical atlas" sort of style--what if Indo-European people had invaded China during the Bronze Age, like they did in India? 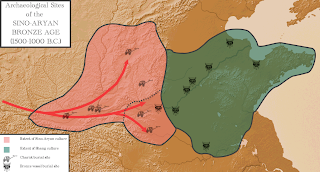 Finally, this one could be considered a sequel of sorts to the map above:

Three thousand years ago, a few bands of wanderers from the Eurasian steppes made a long trek by way of the Gansu Corridor and came to a land that would never be called China. Over time, others followed those first few adventurers, carving out kingdoms for themselves along the Yellow River. Cities burned, armies clashed, generations lived and died. For centuries they warred with the decaying empire of the Shang, until at last the newcomers gained the upper hand. The first kings and conquerors faded into memory and then into myth as their descendants made this land their home, melding with the inhabitants like tin and copper coming together to make bronze--something new, and stronger than either: Heilan.

The Heilanic people were originally a hybrid culture, an Indo-European stratum overlaid on a mainly Huaxia population. Genetically, the Huaxia won out, although a few features--light eyes, brown or reddish hair--still sometimes appear, particularly in the western regions. Linguistically, the new arrivals dominated, although modern Heilanic dialects have diverged immensely from their Indo-European ancestor (and from each other) thanks to millennia of near-isolation, close contact with Sinitic languages, and plain old linguistic drift. Archeological evidence suggests that the native Shang script remained in use for several centuries after the conquest, but was eventually replaced by a new syllabary better suited to the Heilanic languages.

Historically, the greatest rivals of the Heilanic kingdoms have been the Yuht, to their south. In contrast to the varied agriculture of the Heilanics, the Yuht civilization is primarily based on the intensive cultivation of rice. Unsurprisingly given their long history, there has been a great deal of cultural interchange between the Heilan and the Yuht and a number of the smaller kingdoms along the Huai and Yangtze Rivers show the influence of both groups.

To the north and west of the Heilanic kingdoms are the domains of the various nomadic tribes. These tend to be rather ephemeral, but at times their influence has covered much or all of the Heilanic zone. Currently the Tuvans are the most powerful and organized of them. The kingdoms of the Korean peninsula have generally maintained an independent identity; at the moment the mainland kingdom is under some pressure from its Heilanic neighbor to the north. They share the Japanese islands with a number of Ainu states, which have had intermittent contact with the Heilanic states of the mainland since roughly 500 BC.

Technologically, Asia is in somewhat ahead of our timeline's 1500 AD. Gunpowder is known and used, mostly in the form of cannon and matchlock muskets, but bow-armed light horsemen and heavy cavalry are still found in many armies, particularly in the north and west, in a manner reminiscent of 17th century Poland or Russia. Water power is widely used where applicable; a few primitive steam engines are being used in coal mines. Some forms of printing have been in use for centuries, but movable type has not been widely adopted. Naval technology is also more advanced, though the Yuht and the Ainu are the forerunners in those areas.

Contact with the rest of the world varies. Trade networks connect much of the west Pacific and Indian Oceans. India and Persia are often heard of, but rarely visited. The Kingdom of Lat in the distant west is a mere legend of a place where the streets are paved with jade but granite is worth its weight in gold. These stories, together with tales from the Yuht countries about a vast new continent to the south, have sparked an era of exploration, though one somewhat more cautious and so far less rewarding than our worlds'. A few outposts are maintained along the western coast of North America, but for those who want to live a endless forest full of unhappy natives, Siberia is much closer. The rich kingdoms of the south have been weakened by disease, but are still too far away for any potential conquistadors. Traders from the West Coast colonies do visit occasionally, offering silk and iron for chilis, chocolate, and precious metals.

As for what will happen next, only time will tell... 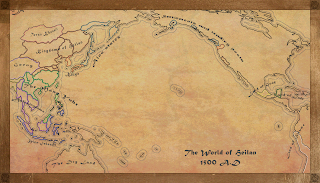 Anyway, as you might have guessed, I haven't been doing much with miniatures lately. But hopefully we'll be able to get some games in over the holidays...
Posted by Norman Dean at 5:14 PM