I have gotten at least a couple more units painted recently--first, after weeks (months?) of procrastination, I finally finished up the third Assyrian chariot. 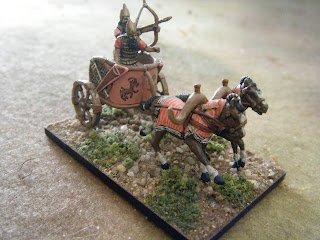 Second, I did some more "paint conversions," turning Robin Hood archers into generic biblical archers.  Between the simple poses and the subdued paint scheme, these were some of the least-exciting figures I've painted. I've got another six in my queue somewhere, and they should be a snap, if I can just find time and motivation to sit down and work on them. 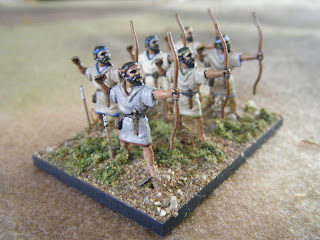 I have hopes of putting a game on this weekend, which will nominally be a playtest for Historicon. To that end, I've been working on getting the back room into usable condition; last night Dad and I got the tables set up again and an appropriately brown groundcloth put down. With the table temporarily clear, I took advantage of the opportunity to get a few shots of all the troops together. These ones are all mine, though of course Dad's Egyptians will also be taking part in this weekend's games.

Here we have the chariot corps: one squadron of Assyrians on the left, and three each of Mitanni and Hittites. 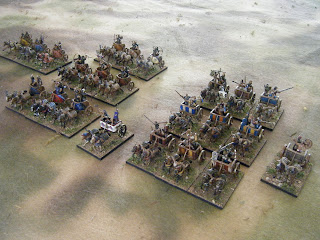 Here we have the infantry, lined up by contingent. 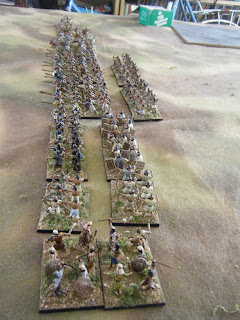 And here's everyone together. 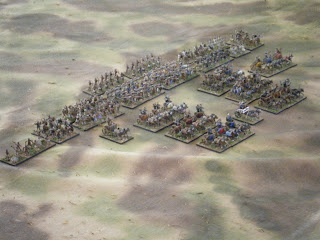 Now, back to cleaning/thinking about rules and scenario design...
Posted by Norman Dean at 1:26 PM 4 comments: 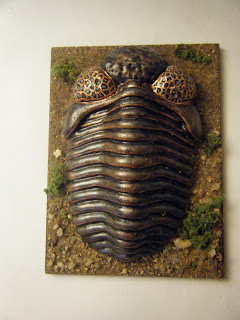 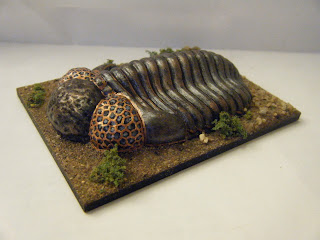 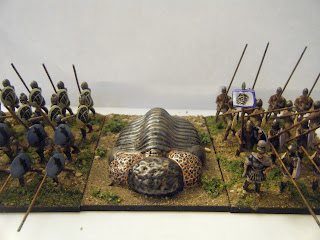 So, to everyone who has dropped by at some point--thank you for visiting, and I hope that you found something of interest, if not necessarily what you were looking for! With any luck, I will be in a position to mark this anniversary again next year, by which time I will no doubt have painted numerous figures and played numerous games, and recorded the results here on this blog.
Posted by Norman Dean at 1:55 PM 3 comments:

A couple of quick games

Dad was of a mind to play a game or two this evening, so we hauled out some of the 20mm figures for a couple of rounds of Hordes of the Things, featuring a couple of my armies and some of the Punic War figures press-ganged into providing some opposition. 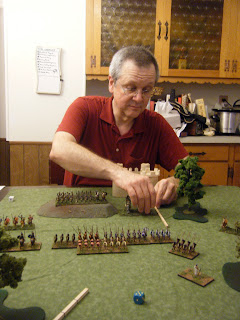 The first game saw the Antediluvian army (mostly Spears, backed up by a Magician and a couple of Riders) on the offense up against a more diverse "Carthaginian" force with some elephants as Behemoths and a couple varieties of mercenaries/allied cavalry as Knights and Riders. 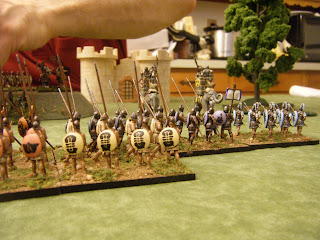 View from behind the lines.

The beginning of the battle saw my block of Spears roll forwards against Dad's Spears and Behemoths in the center, while a couple of smaller actions developed on the flanks: my Riders against his Knights and his Riders against one of my Spears and my Magician. Unsurprisingly, my Riders got pushed back and eventually overwhelmed, but with a little luck I was able to take down both his elephants and one of his Riders. 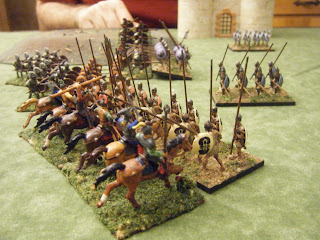 Unfortunately, I got a bit overconfident, and tried attacking his Spears uphill, which lost me one of the units on the end of my line. Between that and the Knights suddenly appearing in the rear of my line, I was compelled to readjust my position, and the whole battle swung about 90 degrees. I had a brief shot at killing his general, which failed, before his Knights ran down two more of my Spears, evening up the losses. (Some poor rolling on my part there.) Luckily, just as we were preparing to make our last stand, my Magician summoned his reserves and blew away Dad's other Rider, pushing his army over the limit.

The second game saw the Dinotopians (a hit-or-miss combined arms mishmash) against the Romans Volscian Republic (mostly Blades and Spears, with a few Riders and a Knight General). Fortunately I got lucky on my initiative rolls, and was able to get my pterodactyl Flyers behind his lines while my Warbands hit him from the front. My Hero General destroyed his Knight General for a quick victory. 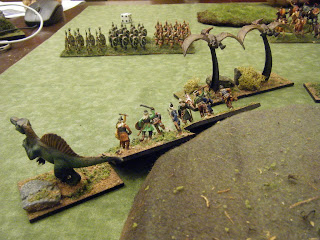 Warbands rush down the hill, supported by a Behemoth and some Flyers. 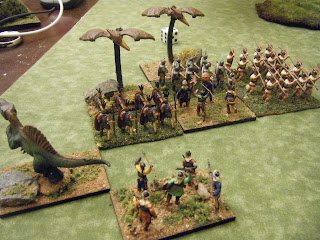 His Blades repulsed my Warband and now face the Flyers that have come up behind them; my second Warband has plowed through his front rank of Spears. 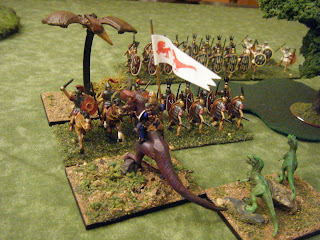 The Hero gets a bit of aid from his pterodactyl buddies.

Orcs, Byzantines, and other mythical creatures

What Norman has been painting: 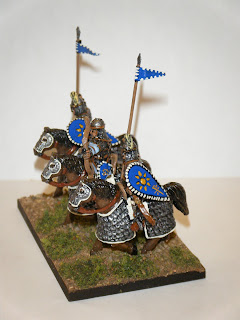 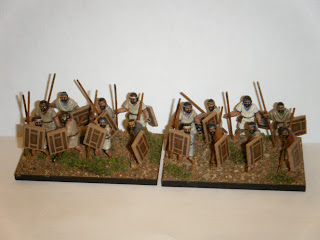 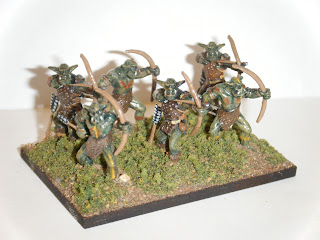 What Norman has not been painting: 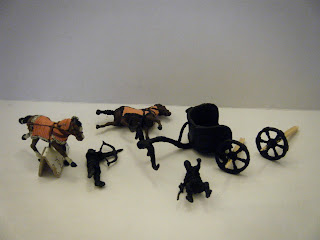 This third Assyrian chariot that's been sitting around for weeks now!

About a month back, I was sorting through our pile of unpainted figures and came across a whole bunch of these Strelets Russians that Dad picked up a few years ago. Looking at them, I wondered whether they might be suitable for Byzantine troops, so I cut a few off the sprues to try out. In a fit of procrastination, I got around to painting them up this week, and I have to admit I'm now kind of skeptical. I don't really enjoy painting the chunky Strelets figures as much as some others, and the more I painted them, the less Byzantine they looked to me. But no matter--they can still be troops of the Mizarene Empire. (Or Videssos, for that matter, given the shield design...)

The Orcs have also been sitting in the queue for a while, so I suppose it's good to get them out of the way as well. Some of Paul's conversions that he posted a week or two back were quite interesting--I may have to give something similar a try myself...

I also got in a couple of games of HotT with my brother recently--while there's not much to tell by way of a battle report, I figured I'd take this opportunity to show off some of his figures: 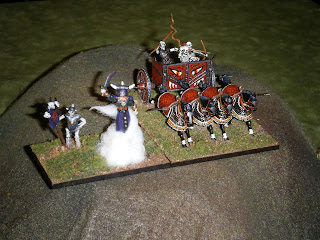 The Lich King, along with his latest toy--a Persian-style chariot. 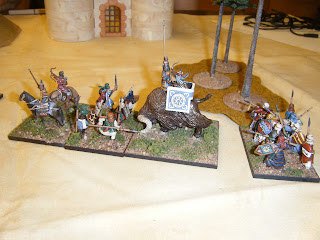 My Mongols face off against his Arab types. We had a weird sort of Conga line situation going on here: If my Behemoth had beaten his Spears, he would have recoiled into my Riders and died. If my Behemoth had lost, it would have crushed the Spears behind it when it recoiled. Either one would have given me the last two points to win the game. Naturally, the combat was a tie.