Past battles and future purchases

Despite just having been home for Barrage, I made my way north again last weekend at the promise of waffles and a NQSYW battle--which turned out to be a great improvement over the previous one, at least from the Wachovian point of view. Since I arrived the evening of the 21st, Dad and I decided to celebrate the publication of The Hobbit and the semi-completion of my Orcish army with a quick game of Hordes of the Things. Rather quick, as it turned out--somehow our generals managed to get themselves into a situation where one of them would inevitably die, and I lost the crucial roll... 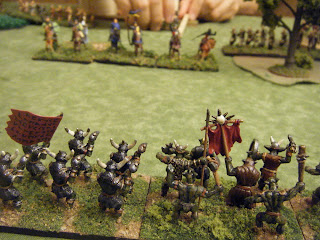 View from the Orcish center 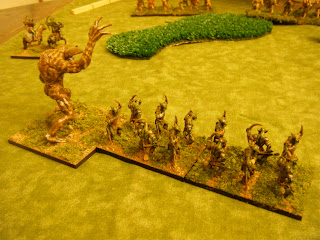 Orcish archers and their buddy the bunyip. 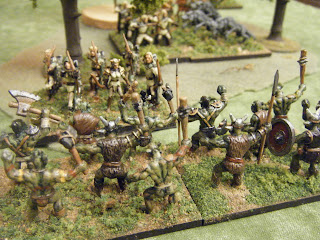 Facing down the Elvish contingent in the woods. 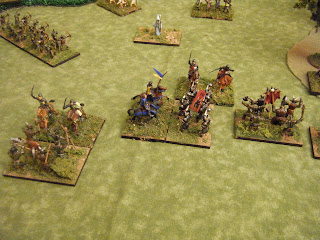 The next morning, after the promised waffles, we packed about four regiments of troops (not to mention cavalry and artillery) into the trunk of my car and headed down to Chris Palmer's place, where the Pragmatic Coalition would once again face off against North Polenburg. (North Polenburg's partner in crime, Rosmark, is apparently having some internal problems again...) This time, our objective was to drive the enemy out of a defensive position which they had taken up in two villages and which they had supplemented with some redoubts. Fortunately, we had numbers on our side, an advantage which we used to good effect.

I took command of my Wachovian troops, making up our left wing; a combined Schoeffen-Buschhagen and Wiegenburger force, with a significant cavalry component comprised our center, and a second Schoeffen-Buschhagen regiment with light infantry support took up the right. While much of the enemy's attention was drawn to the right and the center, the Wachovian infantry advanced across the field towards the western village, sustaining relatively light losses from the guns in the redoubts. And on the extreme left, I took advantage of the Wachovian hussars' mobility (and lack of opposing heavy cavalry, for once!) to work my way around the very edge of the table and behind the line of redoubts.

Between concentrated cannon fire from our own batteries and the advancing infantry, we were able to suppress one of the two opposing guns. This left an enemy company occupying the western village and another half-company and a gun in the second redoubt. Braving a hail of fire from another company that was being deployed to the scene, the Wachovian hussars charged the rear of the redoubt and engaged the troops there in melee, allowing the bulk of my infantry to advance on the village. There we managed to put the lessons of the previous battle to good use--the defenders were reduced by volleys of short-range musket fire and a few well-placed cannonballs, and we did not have to try the rather iffy business of storming buildings. Meanwhile, our compatriots on the right and in the center had also gained their objectives (though not without some heavy losses, particularly for the Adellman regiment). The enemy was forced to cut their losses and fall back, leaving the field in Pragmatic hands.

(Note: you can read a couple of other accounts of this battle, free of pro-Wachovian bias, here and here.) 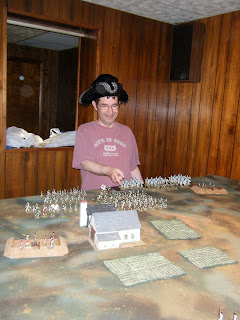 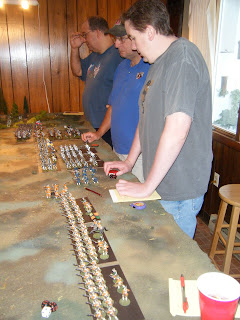 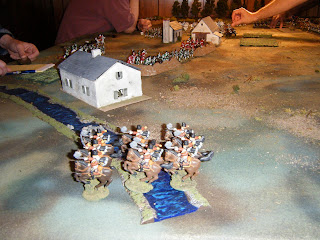 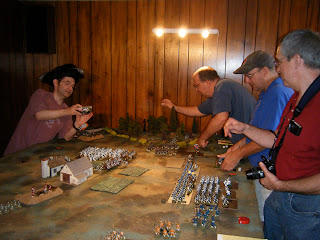 I wasn't the only one taking pictures... 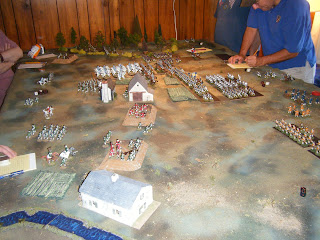 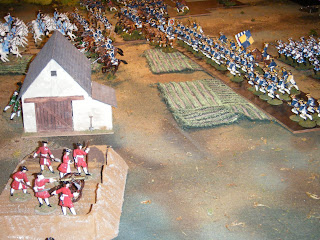 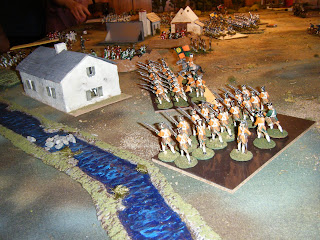 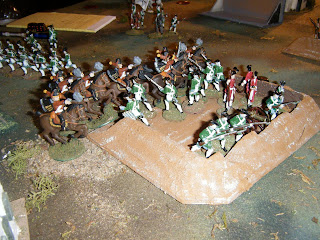 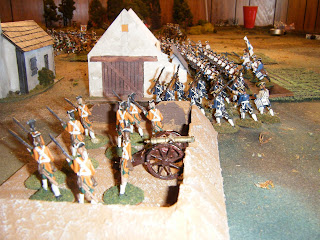 Another Wachovian contingent takes a gun! 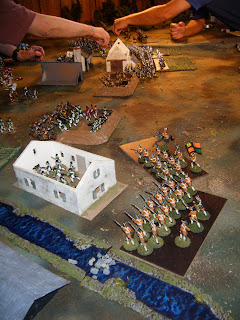 A broader view of the action. 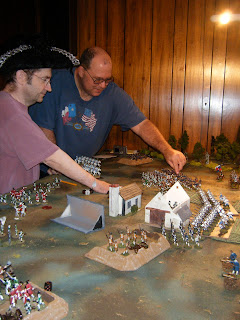 Resolving another melee in the center.

We did get in one more game, but I didn't really take any pictures--not that there's a whole lot to see when it comes to 6mm WWII anyway...

In other news, it's an exciting time to be me as far as new miniatures releases go: as though reading my mind, Orion has put out a couple of sets of Byzantine infantry, so I will not be forced to use converted medieval Russians when it comes to expand that army. Finally, Caesar has released a whole boatload of new sets... including the long-awaited (long awaited) Mycenaean chariots, which look pretty darn spiffy, so I may have to get some work in on the Bronze Age again. And of course, I still have a few more orcs to paint, and the next unit of Byzantine lancers, and some Wachovian hussars, and a couple more NQSYW units beyond that... well, I guess I'll find something to keep myself busy. (And everyone seems to want a map for the NQSYW all of a sudden--I guess I should work on that too...)
Posted by Norman Dean at 9:27 PM 1 comment:

Each year, the Harford Area Weekly Kriegspielers (of which I am a member of sorts) hold a one-day convention called Barrage. For the past couple of years, the convention has been held sometime in January or February, but this year the convention featured both a new, less blizzard-prone date of September 15, and a new location in the Havre de Grace Community Center. So Friday evening I made my way up from Germantown to join my dad and my brother in attending this year's Barrage.

(My attempt to record this event for posterity was almost foiled by my camera's SD card--I got home only to find that all the pictures I had taken were gone! The good news is, a bit of poking around on the internet was able to turn up a free program capable of recovering them, called TestDisk, which worked OK on my slightly antiquated MacBook. The bad news is that the recovered photos are a bit grainier than usual. Still, better than nothing!)

We showed up at about 8:30, in time for Dad to unload a pile of stuff onto one of the flea market tables.  At about 9:00, I got drafted into a game of Fireball Forward; WWII North Africa in 15mm. The Germans needed to get their armor units past the British defenses and off the table; the British goal was to hold them off for seven turns. WWII is not my usual forte, but the game went pretty smoothly at first, as we (the British defenders) laid out a selection of concealed trenches and minefields and waited for the German attack. We did a number on their infantry before being forced out of our first trenchline, but as the game wore on it became apparent that our anti-armor capabilities would not be sufficient to prevent them from simply plowing through our lines with their tanks. Even our generous supply of off-table artillery was unable to dent their armor, and by about turn six, the majority of their armor had exited the table. 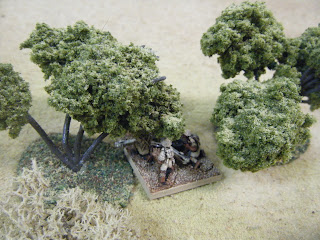 One of our unfortunate anti-tank guns. Apparently I'm bad at not running out of ammo... 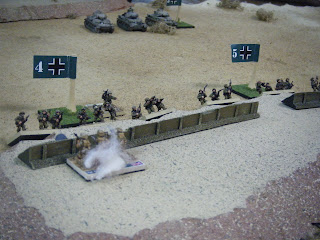 That one stand held the forward trench for a good while, despite the forces arrayed against it. 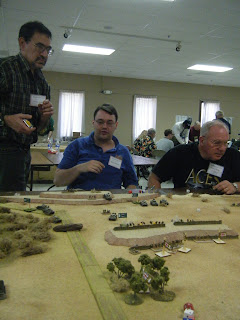 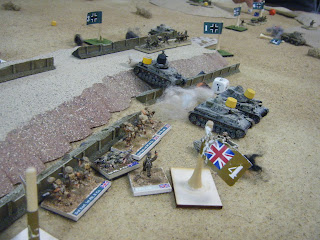 Our infantry shake their fists impotently as the panzers roll through.

While that was going on, Dad was running his one game of the convention--"Hannibal at the Gates," a re-fight of the Second Punic War battle of Trebbia, with simple rules intended for kids. I wasn't paying a whole lot of attention, but I think the good old Roman legions managed to stand off Hannibal and his elephants this time. 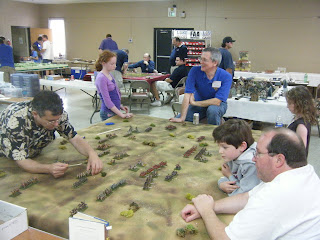 After lunch, my brother and I both ended up on the German side in Richard Heffner's WWI Aerodrome game--always a lot of fun. William managed to make it to Ace over the course of four rounds; I managed not to get shot down, which can be an accomplishment too--I credit the green and orange camouflage on my plane, which blended in nicely with the battle mat. (Although in the last round I did suffer a critical hit on the very first turn, which compelled me to head for home. Doesn't count, though!) 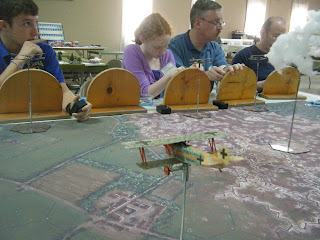 My plane in the foreground. 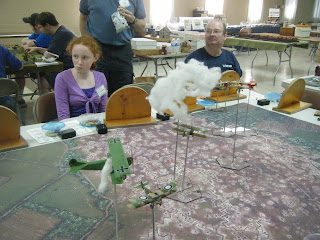 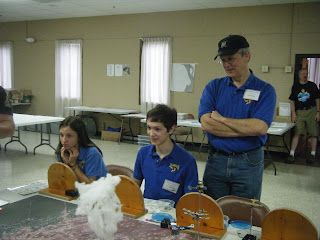 Two of our deadliest pilots. (And Dad, who is just kibitzing.)

I did end up in one more game--a WWII air action featuring P-40 Tomahawks and Brewster Buffaloes against Japanese "Sally" bombers, which was mostly an exercise in how not to attack a bomber formation--we only managed to take a couple of them with us before getting shot down. 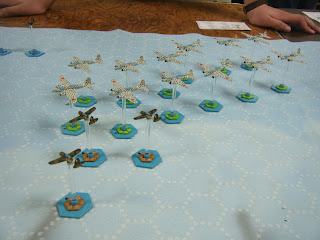 Buffaloes prepare for their attack run.

All in all, it was a very enjoyable day of gaming--I think the new space is an improvement, and it seemed like there were plenty of games and plenty of people. Hopefully next year's Barrage is just as good!
Posted by Norman Dean at 10:05 AM No comments:

Yes, I'm still alive, never fear. Strangely, this whole "being employed" business doesn't seem to me as much time for either painting or blogging as I had before... also, at some point I seem to have crept over the 10,000 views mark!

Anyway, employment not withstanding, I have managed to get a painting desk set up and a certain number of miniatures painted. Lately I've been on an orc binge--the Caesar orcs are a lot of fun to paint, even if I am getting a little tired of some of the poses by this point. Also, with my latest few units I'm almost up to the 24 AP necessary to field a Hordes of the Things army, which was my goal in all of this. 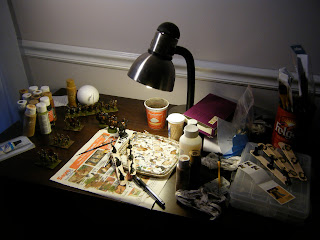 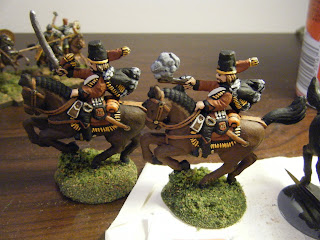 My other current project, not proceeding very fast. 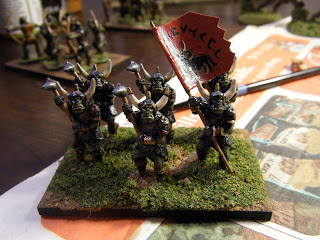 A stand of Blades or possibly Warband, depending on the situation. 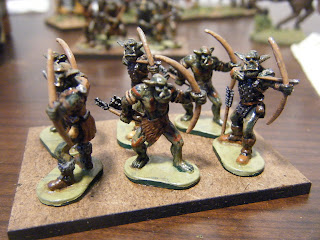 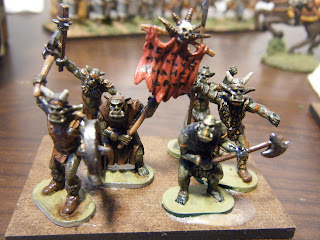 I also did a flag for one of our NQSYW mercenary contingents when I was home over Labor Day; hopefully Dad will post a picture at some point.

Next weekend is Barrage, our club's annual convention, so I'll be home for that--should be able to get my orcs all based up, while I'm at it. Beyond that, my goal is to get these orcs out of my system by the end of the month; after that maybe I can get some work done on Not Quite The Seven Years' War. (Then again, I hear Orion may be putting out some Byzantine infantry in 20mm soon...)
Posted by Norman Dean at 7:37 PM 1 comment: