Another set of maps today! The usual cautions apply--no, these maps do not depict actual events. Kids, don't cite me in your research papers. (Well, I guess you can cite me if you use proper MLA style or whatever if you really want to. But I don't recommend this as an accurate source for any history your teachers will recognize...)

This first map was a relatively non-serious look at how future archeologists might misinterpret the remains left by our civilization. I realized afterwards that I was probably subconsciously influenced by reading David Macauley's "Motel of the Mysteries" when I was younger, as well as the Penguin Atlas of Ancient History, which was full of maps labeled with mysterious "Baltic battle-axe cultures" and the like. 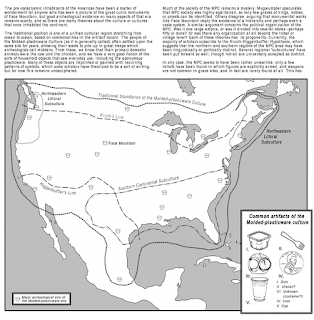 This next one was the result of a discussion on alternate scientific revolutions. It owes a certain amount of its original inspiration to Michael Flynn's "Quaestiones Super Caelo et Mundo," though I thought his ending was a bit overly optimistic. (And I ran with a different starting point--POD, or "point of departure," as the alternate history slang usually goes.)

1331. Somewhere in the Yunnan province, a medieval Chinese farmer notices a faint tickle on his left leg. He looks down and brushes off the flea before it can bite him.

On the other end of the great Eurasian landmass, the High Middle Ages are in full swing. Universities are springing up like mushrooms after rain, and scholars like Jean Buridan are examining and questioning the Aristotelean worldview that has held sway for centuries. In this world, the budding scientific revolution will not be cut short by the Black Death--instead it will come to full flower, some two centuries before that of our world. By the late 14th century, Buridan and his pupils have compiled the laws of motion, while later thinkers expand the borders of math and science in many directions--building on the works of the Calculators of Merton as well as translations of Arabic works on algebra, the calculus is developed. Others turn their talents to astronomy, chemistry, biology, and their work is shared across the continent by a marvelous new device--the printing press.

To an observer from our world, one of the most extraordinary elements of this "scholastic revolution" is its relationship with the Catholic church, which (without the social upheaval of the Black Death) proves itself (in general) to be willing to foster and adapt to these new ideas. Many of these new scientists are also churchmen and theologians as well. This world sees no Reformation or Counter-Reformation, and while from time to time there is political disunity in the Catholic world, there is no theological disunity--across the continent, thinkers remain connected by the bonds of reason, logic, and faith.

There have been setbacks too, naturally--plagues remained frequent occurrences until sanitation improved and the germ theory of disease was developed. Of course this was too late for the inhabitants of the Americas, but overall they still fared better than in our world. The New World was discovered by powers more interested in trade than conquest--the exception being Mexico, where military orders were established to stamp out human sacrifice. An Incan empire survives to this day, though considerably Christianized, as do a few other native states on both continents.

Despite the head start in science, this world is not outrageously far ahead of us in technology--the industrial revolution did not develop as quickly as the scientific one, and there is a rather Hellenic attitude, especially in Europe, that scientific learning is worthwhile for its own sake and that applying it to the real world is slightly vulgar. (Several rising powers, in Asia and elsewhere, have no such qualms--something that is starting to alarm political leaders.) The continued relationship with the church is rather interesting--an article titled "The implications of quantum superposition for the doctrine of transubstantiation" would raise few eyebrows in this world's academic journals, and this world's equivalent of the Hubble Space Telescope has permanent staff of monks. 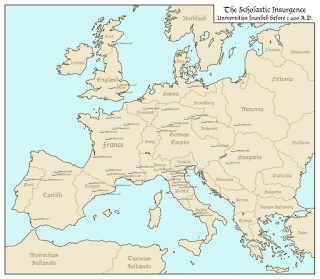 These last two are a pair, as should be pretty obvious from looking at them. It all started when I got to wondering what might have prevented the rise of the Assyrian empire. Then I came across the Wikipedia article on the Cimmerians, and having just read Robert E. Howard's Conan stories within the past year or so, one thing led to another...

Know, O prince, that between the years when the darkness swept over Hatti and the gleaming cities, and the years of the rise of the Sons of Ares, there was an Age undreamed of, when shining kingdoms lay spread across the world like blue mantles beneath the stars - Urartu, Aram, Phoenicia, Phrygia, Israel with its dark-haired women and temples of holy mystery, Chaldea with its chivalry, Moab that bordered on the pastoral lands of Edom, Egypt with its shadow-guarded tombs, Media whose riders wore steel and silk and gold. But the proudest kingdom of the world was Assyria, reigning supreme over the dreaming east. Hither came the Cimmerians, black-haired, sullen-eyed, swords in hand, thieves, reavers, slayers, to tread the jeweled thrones of the Earth under their horses' hooves...

The idea here is that Assyria gets caught up in a badly-timed civil war--I'm thinking the turtanu (general) Shamshi-ilu tries to overthrow Shalmaneser IV, but doesn't quite succeed--and in the process, a lot of Assyria's recently conquered territories make the most of a chance to regain independence. And now, with all parties weakened, the barbaric Cimmerians are licking their chops... 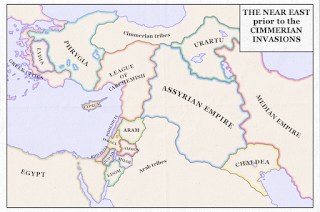 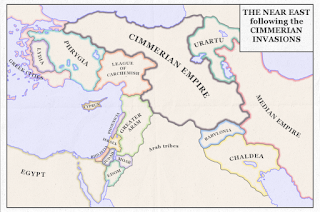 The failed rebellion of Shamsi-ilu spelled the end for the Assyrian Empire. The cities of northern Syria and Cilicia reasserted their independence under the loose leadership of the Neo-Hittite city of Carchemish, while the Urartians and Chaldeans both took the opportunity to regain recent losses. Still, the worst was yet to come. The loss of the conquered territories deprived both Shamsi-ilu and his opponent, Assyrian king Shalmaneser IV, of a valuable source of manpower. To compensate, both sides began hiring mercenaries, including many from the Cimmerian tribes of northern Anatolia. Following Shamsi-ilu's defeat, some of them returned home, but others remained in Assyrian service or settled in the northern parts of Assyrian territory. A few rose quickly in the ranks--the war had provided many opportunities for advancement, and foreigners in positions of power were nothing new. (In fact, Shamsi-ilu himself had come from the Aramean city of Til Barsib--though this did not keep the city from joining Carchemish and its other neighbors in rebellion.)

By the time of Shalmaneser's death in 773 BC, one of these Cimmerian mercenaries had risen to become a turtanu of the army, and others seem to have gained positions of power throughout the kingdom, particularly the increasingly volatile north, where presumably they remained in contact with their relatives beyond the frontier. Shalmaneser was succeeded by his brother Ashur-dan III, but Assyria's days were numbered. The Cimmerian turtanu Kanaran seized power in Nimrud, and Ashur-dan was forced to flee the city.

Kanaran's coup was the start of a new era in the Near East. Though much of the administrative structure of the old Assyrian empire was taken over intact, the new dynasty brought new vigor to many of its institutions, including the military. Kanaran carried on with the Assyrian tradition of yearly military campaigns, beginning with a series of expeditions to the north that brought most of the Cimmerian homeland under his sway, pushing west to the borders of the Phyrigian kingdom, and making tributaries of the Greek colonies along the coast of the Black Sea. Subsequent campaigns against Urartu and against some of the eastern members of the League have solidified his position with his Assyrian subjects.

To the west, the situation does not look good for the League of Carchemish--founded in the immediate aftermath of the revolt that threw out the Assyrians, ties between its diverse members had grown slack as Assyrian power waned. Now with a renewed threat from the north and east, the League also faces dissension within--a number of the southern, Aramaic, members have thrown their lot in with the rising star of Aram-Damascus, which has just completed a successful campaign against the unlikely alliance of Israel and Ammon, forcing the former to give ground in the north and reducing the latter to a vassal.

To the east, the Medes bide their time and Urartu licks its wounds. A much-reduced Assyrian successor state based out of Babylon has been forced to seek help from the Chaldeans, who are glad of a buffer state between them and the new northern menace as Kanaran I prepares for this year's campaigns...