The dwarves are for the dwarves!

I mentioned at the end of my last post that I was thinking about what I would need to put on a version of the Battle of Five Armies from The Hobbit. This notion was sparked in part by running across a couple of dozen dwarves in my stash of unpainted miniatures (two sprues of the Light Alliance Dwarves Set 1) and wondering what I could do with those. This month, I decided to go ahead and paint them up, as a little contingent to use in Hordes of the Things or other fantasy rules.

After some consideration, I decided to kit them out in a lot of reds, yellows, and oranges, with browns and grays for some variety. I had a few spare shields leftover from the Assyrians, so I gave these to a couple of the figures that didn't have one. For shield designs I tried a few geological motifs, but others ended up with more general geometric designs or ones based on tools. 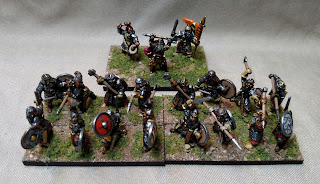 The dwarven contingent all together. 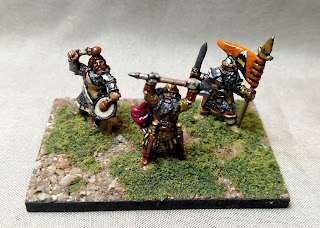 The dwarven commander - or perhaps a Hero for HotT? 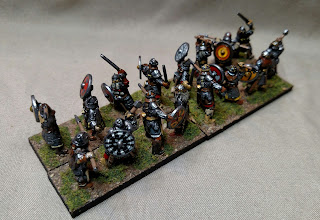 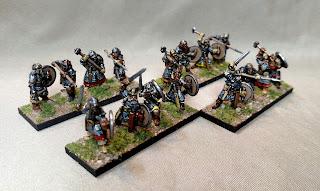 A few different views of the dwarven infantry.

I decided to try something a little different with the bases - a lot of my existing 20mm fantasy infantry are based six or eight to a 60x40mm base, but for these I decided to try base them in groups of four on a 60x20 base. This way I can arrange them two ranks deep to match my older units, but it also gives me a little more flexibility to split them up if that would be useful at some point. (Also - I had a whole bunch of spare 60x20 bases and not so many 60x40s...)

Having finished these, I must say I am not inclined to expand them to a whole army. While the figures looked OK on the sprue, I found painting them to be a bit of a chore - many of the poses are kind of flat and the sculpting is a little chunky. Nevertheless, now I have some dwarves finished, and I expect they will be more or less stalwart allies for some of my other armies down the road.