Origins of the toy soldier?

Last Wednesday, I was in New York City with a couple of friends, and in the afternoon we visited the Metropolitan Museum of Art, which was something I'd never done before. (As a matter of fact, I don't think I've been to New York before, unless I was a very small child at the time.)

Anyway, the Met is a fascinating place; I only had a couple of hours to spare, which was not enough to see even a quarter of the exhibits. I started off looking through the collection of ancient Greek artifacts, since it was near the entrance where we came in, and among all the spectacular pots and statues, I came upon a display case full of miniatures. 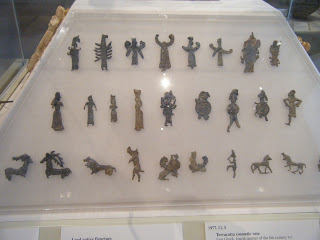 It's a little difficult to see, but the label at the bottom calls them "lead votive figurines." I presume this means they were used as offerings or something similar, but I wonder whether some might have been toys as well. After all, casting lead miniatures is not terribly difficult if you have the equipment--which the ancient Greeks clearly did--and I expect that even then, lead was pretty cheap. As you can see, there are both male and female figures (and some of the fellows in the second row seem to be armed) as well as a variety of animals and a pair of sphinxes.

(Side note: Before visiting the Met, I had not realized just how deeply the sphinx was ingrained in ancient Greek culture. There were sphinxes on pots, sphinxes on jewelry, giant sphinx statues on pillars as tombstones... were they just fun to sculpt, or something?) 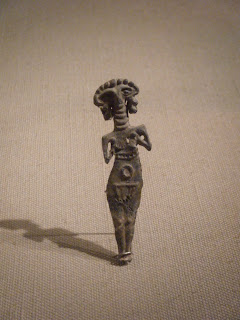 Another lead votive figurine... but this one is from the 3rd millennium B.C. And it gets better: 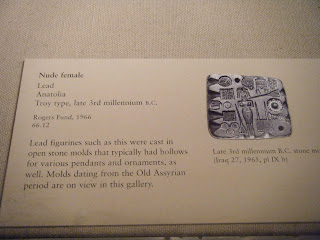 Here you can see a picture of the mold this was cast in, which looks remarkably similar to ones we still use for casting toy soldiers today. My father saw this picture and noted that the description here is probably incorrect: it describes this as an open stone mold, but it is pretty clearly one half of a two-piece mold. Note that all of the various geometric "pendants" have a sort of wedge-shaped channel running to the edge: when the two halves of the mold are put together, this would be where the molten metal could be poured in. The small round holes in the upper left and lower right probably match to nubs or something on the other half to ensure that the two halves are fitted together correctly. (Otherwise you can get molten metal leaking out the edges, which is a Bad Thing.)

Anyhow, the point of the story is this: lead casting has been going on for at least four thousand years, which is a surprisingly ancient heritage for the miniature wargaming hobby!
Posted by Norman Dean at 10:30 AM