The People's Republic of Mbotu

After a brutal and protracted guerilla war, the Marxist Succession Alliance has overthrown the colonial government of the tiny Central African country of Transequatoria, and proclaimed itself the People's Republic of Mbotu. A new flag flies over the capital of Ntomde: green for the north, black for the south, red for the workers and peasants!


But forces both internal and external threaten the stability of Mbotu. The Muslim tribesmen of the north were willing to help the MSA throw out the Transequatorians, but now tensions are on the rise between the tribes and the new government in Ntomde. And a group known only as the "Chosen Intervention Phalanx" has been staging incidents on the border with neighboring Zoote. Surely these provocations cannot be allowed to go unpunished!

When it comes to wargaming, I tend to prefer imaginary countries to real ones, so when I first ran across the rules for AK47 Republic, with its randomly generated flags, countries, and faction names, I was intrigued. Years ago, my father put together a generic modern game, with Matchbox vehicles and 20mm plastic troops, but using a different set of rules. As a matter of fact, those figures got hauled out for a game fairly recently--although they're getting kind of shabby these days. (Hadn't figured out techniques for painting soft plastics yet.) At times I've considered adding troops to that project, but never got very far.

But it wasn't until this past weekend that I finally decided to start working on an actual AK47 army of my own--as I mentioned in my last post, I picked up a couple of boxes of figures and some random vehicles at Historicon. I've been supplementing these with a few random figures dredged up from my childhood, mostly guys who I've identified as Esci Spetsnaz, and some vehicles.

I also knocked together a building; I've seen the "corrugated cardboard roof" described in a couple of places, and it turns out it's not that hard to do. Unfortunately I must have misjudged the size a bit, as the roof is missing just a little overhang on the ends. 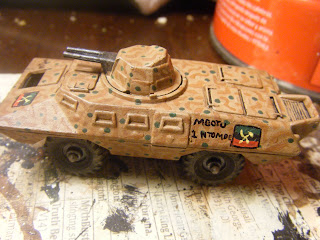 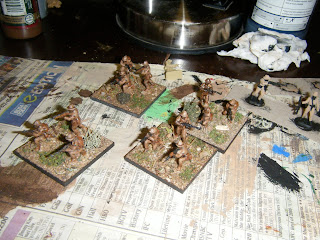 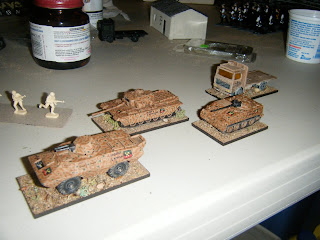 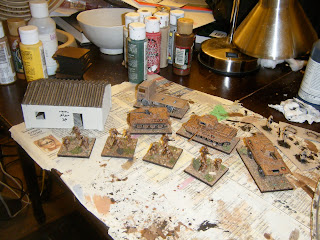 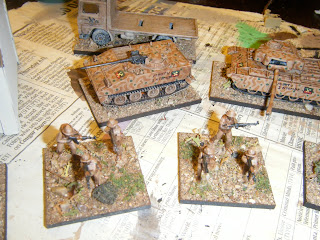