Hordes of the Things

The past couple of weeks have been somewhat marred by the fact that a couple of tropical storms decided to drench the Susquehanna River basin--and since we live near the mouth of the river, all that water eventually makes its way down to us. So we had a flood, and were evacuated for the first time in quite a few years. Fortunately, our house is at the high end of town, so no water got in--but it wouldn't have been much fun to stick around with no running water or electricity anyway, so it was probably just as well that we left on Thursday.

Anyway, among the items we took with us were the 6mm Hordes of the Things armies in their highly portable containers, so my brother and my dad and I have been playing a fair bit of Hordes to pass the time.

As a matter of fact, before this unfortunate business with the flood, we actually got in a couple of games with the new 20mm Hordes armies--some of which double as more respectable historicals most of the time. My "Dinotopian" army (mentioned here previously) came off second-best against my dad's re-purposed Robin Hood figures, but my Bronze Age guys managed to hold their own against William's army of the undead and his fearsome Lich King. 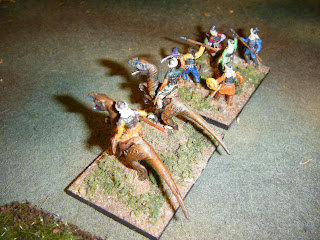 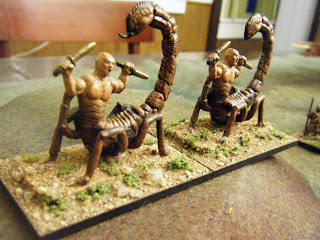 The one fantastical addition to my bronze-age Hordes army: a pair of giant scorpion-men, classed as Behemoths. 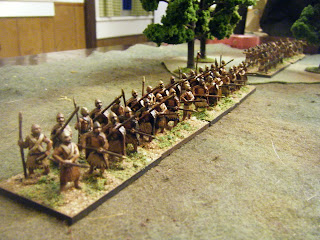 The more mundane troops line up for battle. 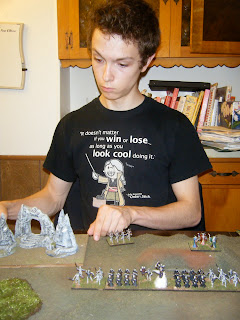 My brother arrays his forces. 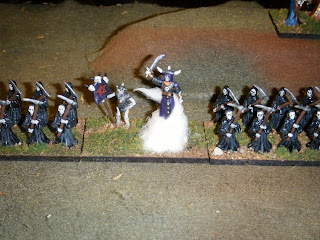 The Lich king (A Hero General) and a couple of stands of Blades. A trio of undead wizards as a Magician stand. 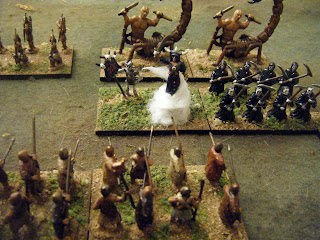 The Lich King is defeated... for now.

Unfortunately, the 6mm guys are not quite as photogenic, but here's a shot of the Fortress of the Chaplain-General, stronghold of the Unstained Brethren. It was an aquarium decoration originally. 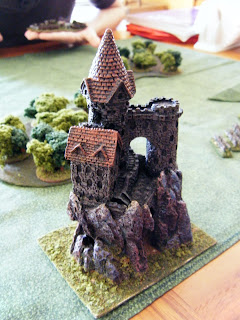 The Unstained Brethren are known for their proud record of defeat and their use of Artillery. This is not a coincidence. Artillery units in Hordes of the Things are expensive and unwieldy, and I would probably be better off replacing them with more Spears or something. But it was kind of fun to knock the catapults together out of toothpicks. You can see one of them in the center of the line here. The fellow on the white horse is the Chaplain-General himself, about to oversee yet another defeat. 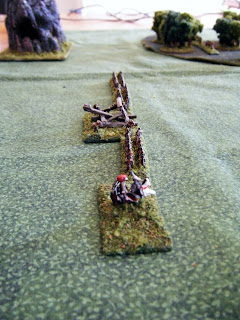