We made a very brief trip up to Fall In! today--the third (and smallest) of the three HMGS conventions, this year held at the Lancaster Host. Strangely enough, this is only the second Fall In! I have ever attended, as previous years I have been occupied with school.

Upon arriving at about 9:00 a.m. this morning, I dropped right into one of Chris Palmer's G.A.S.L.I.G.H.T games, leading a French expeditionary force through the steamy jungles of mist-shrouded Venus, where we met with an ambush. Fortunately, the brute strength and primitive cunning of the reptilian natives proved no match for our élan. (Not to mention our bolt-action rifles...) 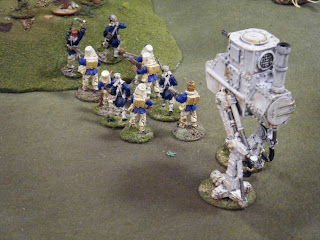 The Legion, with one of its steam walkers. 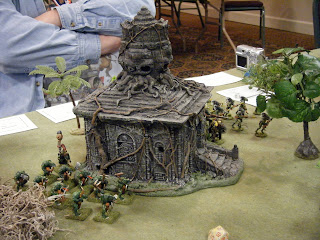 As we approached this vine-tangled ruin, hideous cries echoed through the mist, and the native Parrotmen and Lizardmen burst forth from the jungle. 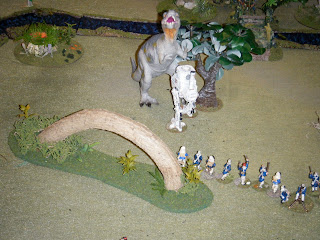 This monstrous beast managed to topple the lead steam walker, and it took several volleys of rifle fire to bring it down. 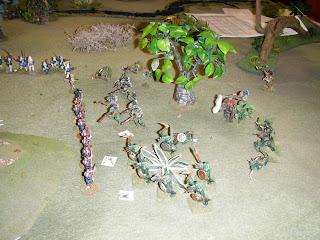 If they had managed to reach our lines, blades and fangs might have wrought havoc among the regulars, but our fire broke the force of their charge, and the few survivors faded back into the mists as suddenly as they had appeared.

After that, I had some time to look through the Flea Market and the Dealer's Hall, where I picked up a couple of things--most notably a box of the Italeri Mongol Command figures to add some excitement to the armies of the east.

However, the unseasonably cold weather led to our early departure--the forecast for Lancaster had called for 3-5 inches of snow, and lo! snow there was: 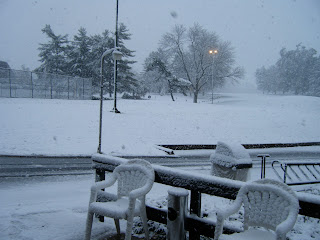 As Dad had some other plans for this evening, it was deemed prudent to depart before the roads became difficult--and thus ends the convention report, such as it was.

Painting has been slow this week--I am now four units behind schedule, and it is unlikely that I will catch up in the next two days, so it may be that this burst of productivity has trailed off for now. Still, I did manage to finish off a few more units: 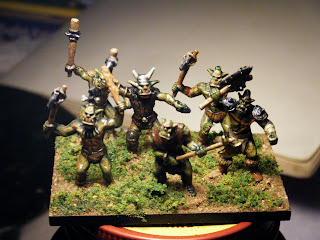 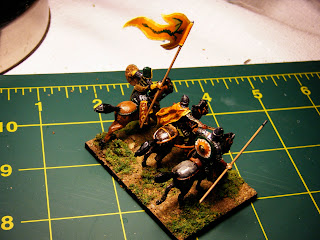 The orcish Warband has been sitting around half-painted for quite a while, so it is nice to have them finished off at last. And the second stand is a Knight General for Dargograd--more of the Orion Khazars. I was looking to pick up another box of these at Fall In!, but none were to be had, though there were plenty of the Pechenegs & Cumans.

I do have a couple of stands I hope to do up over the next couple of days, so perhaps I can end the month on a high note--I'd like to take a crack at those Mongols, but I've also got a few Behemoths who have been waiting for some larger (60x60mm) bases, which we now have... 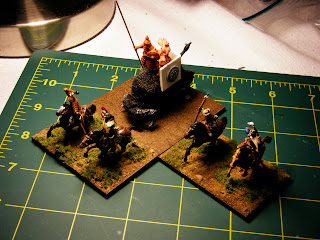