Back to the Bronze Age

My interest in the late Bronze Age in general and the Hittite Empire and its neighbors in particular predates this blog by several years--as does the associated miniatures project. In fact, it's coming up on about five years since I painted my first chariots. Lately it has been neglected in favor of other projects, but I'm tired of the accusatory stares from the sticks of half-painted Hittites I see every time I open my box, so I decided that this week I'd try to get a few painted off. 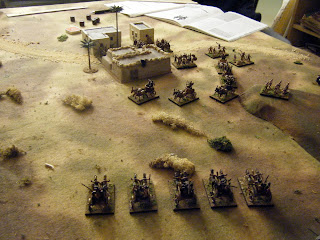 Possibly the most recent deployment of these figures... in January 2010.

I started off with a stand of Sea Peoples (nefarious pirates and brigands of the Mediterranean), drawn from the Caesar set. I've gotten a bit out of practice, having not painted anything in a month or more, but at least they're a decent match for the ones I painted a couple of years ago, if not up to my current standards. 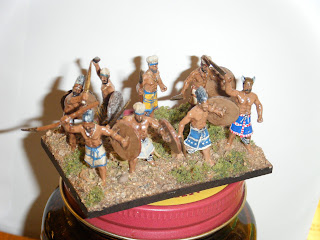 Next up, a batch of archers from Caesar's Hebrews. I have a couple of stands of melee troops done up from these guys already, and I may have gone overboard on the stripes with them. I mostly managed to restrain myself this time, though. 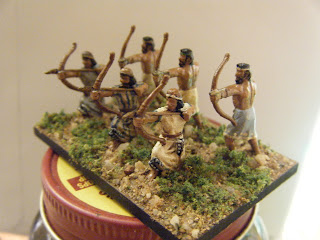 Finally, I just finished an actual chariot--not a Hittite chariot, but a more generic Syrian/Mitanni type that can be part of either an allied contingent or an opposing force. As with probably about 95% of the figures for this project, it is a Caesar product--in this case, their Mariyannu Chariot set. 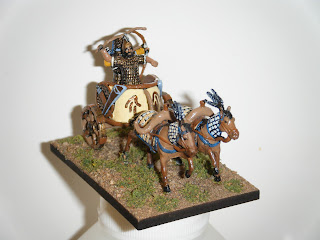 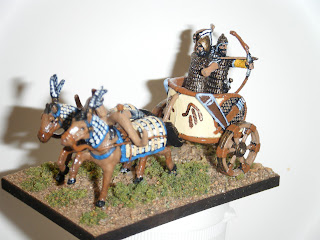 The next thing on my to-do list is a unit of armored infantry with bows... and then I have an experimental prototype to work on. You see, part of Caesar's Bronze Age range includes Mycenaean Greeks and Trojans... but their promised Mycenaean chariots have been stuck in Development Hell for a couple of years. But I recently came across some unused chariot parts, and so I have knocked together something that looks a bit like a rail chariot which may serve for now. (Although I don't currently have any Greeks or Trojans painted, so it's not like this would be immediately useful or anything...) 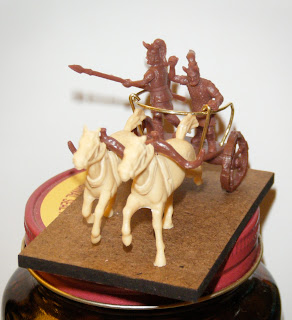 (The chariot base is from the Mariyannu set; the two crewmen are Mycenaean Army, and the horses are actually co-opted from HaT's Gallic Chariot with Warrior Queen.)
Posted by Norman Dean at 3:20 PM