February ended up being a pretty poor month for painting--though not for gaming, since I got in a couple of games of Hordes of the Things with William and helped Dad with a couple of rounds of playtesting for his 54mm medieval skirmish game. However, with the boost in motivation that usually comes from going to one of the big conventions, I hope to get a few things done up over the next couple of weeks.

We headed up to Cold Wars on Friday, after having seen John Carter in IMAX 3-D that morning. (Moderately entertaining, and reasonably true to the source material, though 3-D doesn't really add much in my opinion.) Anyway, we arrived about 2:00 p.m., which gave us some time to trawl through the flea market and the dealer's area. I managed to be relatively restrained in my purchases this time around. I found a box of Esci Russian paratroopers who will probably get painted up for my AK47 Republic project whenever I get back to that. I also came away with a pair of plaster trilobites by some outfit called WindSword accessories. These fit neatly onto a 60x80mm base, so they will eventually be fitted out with howdahs or something and be put into service as Behemoths for my prehistoric-sea-life-themed Antediluvian army.

It seemed like the pickings were pretty slim as far as games starting in the late afternoon time-slot, but the three of us eventually ended up grabbing tickets for a pirate game. Dad, William, and a couple of other players led pirate bands who were attempting to capture the gold shipment I was escorting through a jungle full of angry natives and other assorted tropical dangers. Unfortunately, my team of conquistadors got overwhelmed, and despite a good deal of backstabbing among the pirates, they got away with the gold. (I had a group of reinforcements, but they were unable to reach the scene of the action in time to prevent the pirates' escape--despite the trouble William had in crossing the river with his ill-gotten gains.) 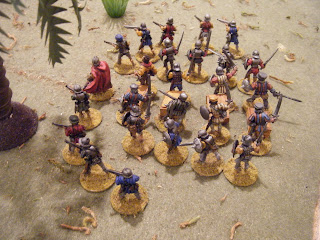 My crew sets off into the jungle. 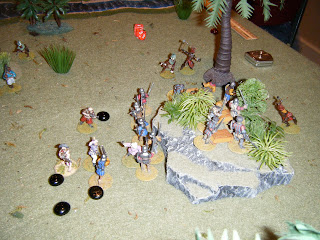 We returned the next morning in time to set up for Dad's 9:00 a.m. game, but unfortunately he was unable to find enough players to run it at that hour of the morning. William and I ended up getting to drafted into one of the Schlegels' eponymous Schlegel's Ferry Blood & Swash skirmish games--this one focusing on the antics of 1930's era gangsters. William managed to get himself embroiled in action pretty quickly, but I tramped about halfway across the board only to be cut down by a burst of tommy-gun fire from someone hiding in a cornfield. Oh well--it gave me a few minutes to grab a sandwich and take a quick run through the Saturday morning flea market before my 1:00 p.m. game. 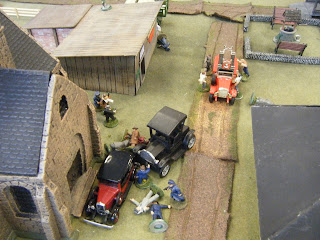 William gets into trouble. 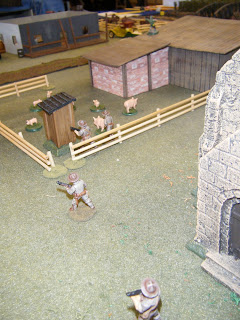 My contingent, shortly before their untimely deaths.

At 1:00 p.m. Dad finally got his chance to run his game. (I hear the English lost this time, in contrast to both playtest games.) I, however, was off recreating the battle of Zama, with Matt Kirkhart's marvelous homemade wooden figures. I ended up commanding the Roman center, in the role of Scipio Africanus himself. 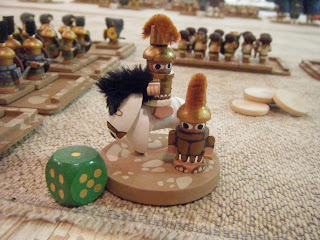 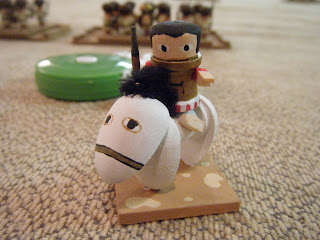 Our troops began set up roughly as per history, with two blocks of infantry in the center and lighter mounted elements on the wings. Hannibal is, of course, famous for his war elephants, and there were four of them on the Carthaginian side. In our game, they ended up deployed off to the flanks, where I think the Carthaginians were hoping to exploit their advantages against horsemen. However, our velite skirmishers were able to keep them occupied on the left, while on the right we had some Numidian infantry who served well enough as elephant-fodder. As the game progressed, the center became a giant infantry shoving-match, while two cavalry melees developed on either wing. Eventually our side came out ahead on both wings, while our manipular legions began to gain ground against the Gallic and Punic infantry. Finally a gap opened up in the center of their line and we poured through, even as our allied Numidian cavalry from our right flank swept around to their rear, prompting them to surrender. All in all, a very enjoyable game! 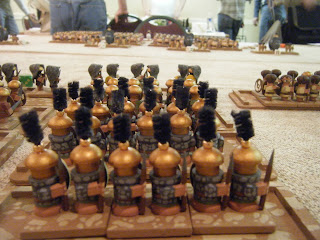 The view from my position at the start of the battle. 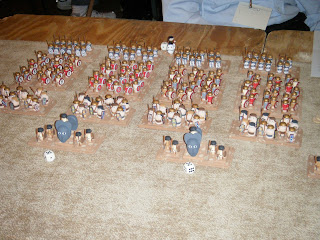 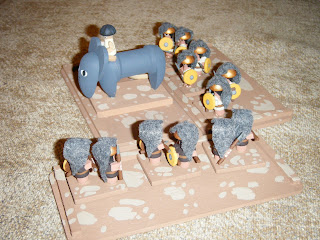 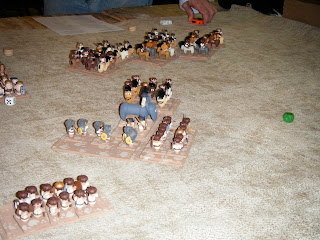 The situation on our right flank. 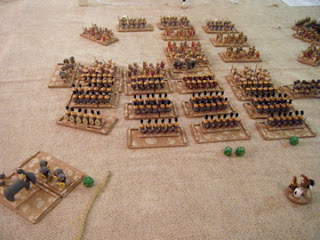 Pushing forward in the center. (One elephant managed to get through and come around behind us, but the Triarii dealt with him.) 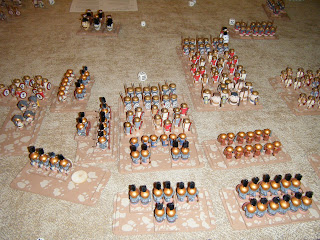 I had time for one more game, so I met up with one of my college friends to play a game of Vlad the Impaler vs. the Ottomans. I had the Ottoman left wing, while Marc had the right. I didn't pay close attention to what went on over on his side of the field, as I was busy keeping my horse-archers out from under the trampling hooves of Vlad's Hungarian allies. Eventually, though, I think he broke through Vlad's left and started a series of contagious morale failures that routed their army. 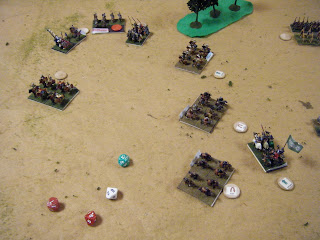 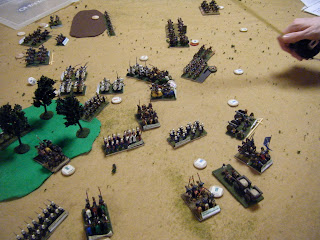 Not sure what was going on over here, but apparently it was important. My general was just about to see some combat when the battle ended...

All in all, a good convention, and hopefully the inspiration I need to get working on some of my own projects again. Next up, Dad has been talking about hauling out the Not Quite the Seven Years' War, and I want to try out an idea I've had with my 20mm Bronze Age project...