Hordes of the LEGOs

And now, as they say, for something completely different! Or rather, a couple of completely different things. My brother has spent the past few weeks digging around in our LEGO collection in preparation for his own Historicon game, but the other day he and I sat down and pieced together a couple of pseudo-medieval armies for Hordes of the Things. This afternoon, we had an opportunity to sit down and play a few games with them, which was mildly amusing--unfortunately, the selection of figures available to us did not allow for a whole lot of variation between the armies, but here's what we came up with:

The Army of King Leo (Red)

The Army of Count Falco (Blue) 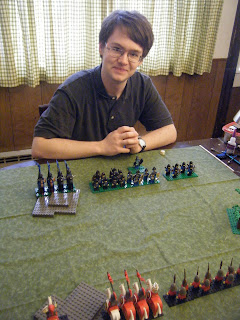 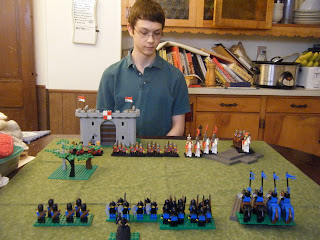 I took the blue side, William took the red. The first two games went pretty quickly--first game, my general got cut off and surrounded; second game, his general charged into my archers and was unceremoniously shot out of the saddle. The third game went a bit longer, and saw me finally get a chance to apply my infantry advantage, as my blades cut through his spears. Our shooters scuffled around in the one patch of woods for a while to no effect, while he attempted to outflank me with his riders and paladin. Unfortunately for him, my knight general was able to best his paladin this time, and so Count Falco claimed victory. 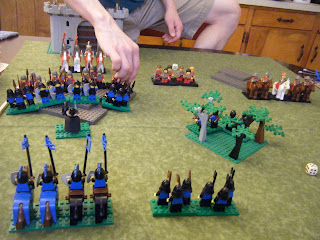 A couple of turns into game 3. 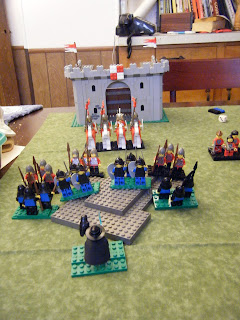 Infantry meet on the hill. 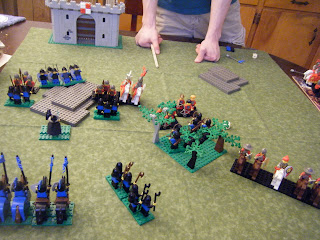 The blades break through. 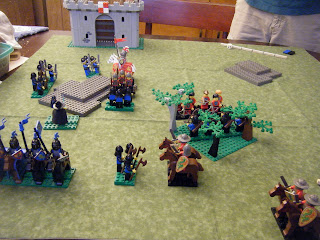 End of the game. William's infantry is gone, and his flanking maneuver has failed.

After we cleared all the LEGOs off the table, Dad and I set up a different game--a little fantasy skirmish with A Song Of Blades And Heroes. My previous experience with this rules system was not particularly encouraging, but it worked somewhat better this time around. I still don't care for the activation system, and I think the game's notions of troop "quality" are a little counterintuitive, but at least it plays fast. My humans eventually chased off Dad's orcs, though not without a few casualties, including their leader. (Apparently he wasn't that good in combat--I guess that's to be expected when you don't wear your helmet and stand around gesturing at things in a commanding manner rather than actually picking up a weapon...) 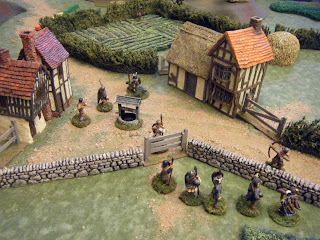 Shortly after the first orcs appeared. My ill-fated leader is one of the fellows standing behind the wall. 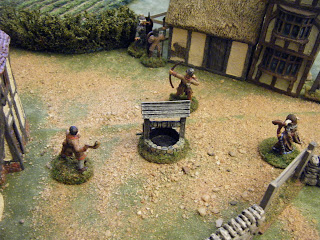 End of the game. The two men by the building have just dispatched the last orc--two managed to escape off the table.

Dad was taking some pictures during the game, so there may be more pictures up on his blog at some point...

Email ThisBlogThis!Share to TwitterShare to FacebookShare to Pinterest
Labels: fantasy, gaming, Hordes of the Things, miniatures