More of the same

Leaving aside the world of LEGOs for the time being, I've continued working on my Bronze Age stuff.

First up: a standard-bearer in a chariot: 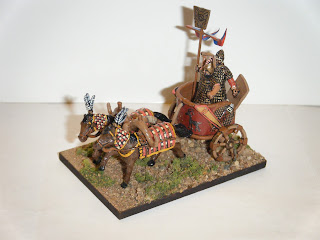 That'll fill out my Mitanni chariot corps for the time being, though I still have some Assyrian chariots to do as well as maybe one or two others. (I've got several boxes of Hittite chariots sitting around unassembled; I've been considering painting up a few, given how much my painting technique has evolved since I did the first ones about five years ago.)

Next up, another stand of Sea Peoples. This'll be the last of them, for now--six stands will probably be sufficient for my Historicon scenario, counting my four and Dad's two. Also, four stands is about all I can squeeze out of one of Caesar's boxes, though I have a few spares left over--I have a couple ideas as to what I'll do with those... 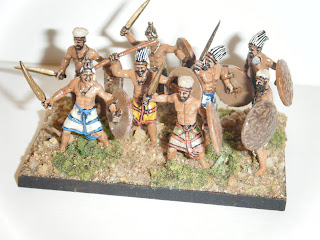 And, speaking of the Historicon scenario, I've been adding to my baggage train. Here we have a second pack donkey, four porters carrying bags, (from the Egyptian Chariot set) and a stand of cattle selected from the Atlantic Stampede set. Together with what I already have, this should give me enough baggage for now. (Unless I come up with a neat idea before July...) 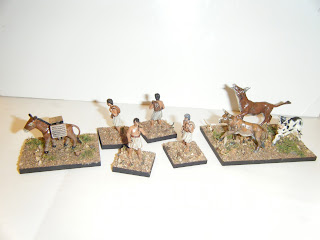 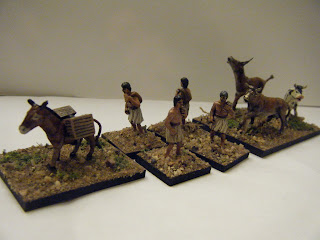 I probably won't have much time to paint for about a week or so--we've got a game planned for tomorrow, then I have some non-miniatures stuff to take care of before we head off to Huzzah next weekend! So expect a report on that at some point...
Posted by Norman Dean at 7:05 PM