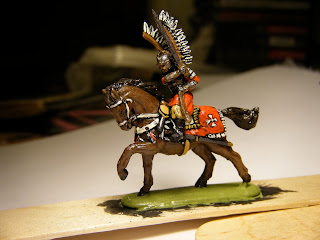 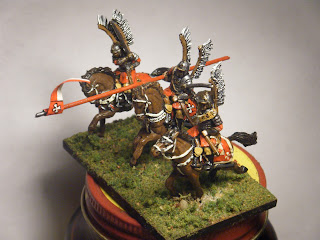 Yep, not a lot to add here. For those who don't recognize them, these are Polish Winged Hussars from Orion. Pretty entertaining to paint, though the figures aren't quite as clean and smooth as some other manufacturers. My planned army list will have two more stands of these guys for the Polish sides, including the general. As for their opponents, the Cossacks are still in the mail somewhere, so next up I'll be doing a stand of Polish infantry. (Actually German mercenary musketeers, with the figures being from Revell's Thirty Years' War Swedish Infantry...)
Posted by Norman Dean at 10:41 AM