I promised in my Cold Wars report that I would discuss my rules system at a later date, and it seemed best to me that I should give that discussion sometime before I completely forgot about the updates I intended to make.

First of all, let me direct you to the previous version of the rules, which may be found here: https://docs.google.com/document/d/1uaZiOYUHXxKZWPc4UBbnQNQq38NDxosCrVLMNYZZuqU/edit

The basic idea behind Norman's Universal Rules Design (henceforth N.U.R.D. or NURD) is that each unit has a single fund of "hit points" (which I refer to the rules as the "action reserve") which also encompasses morale, cohesion, ammunition status, enthusiasm, and all-around general fighting capability. Every sort of action which the unit can perform is listed on the unit's card, and each of them costs some number of action points. Damage inflicted on enemies is also counted in action points, and rallying restores action point--up to a certain level. If a unit drops to half strength or below, one of its stands is removed and cannot be regained unless a leader is present.

Some of this may make more sense with a couple of sample unit cards: 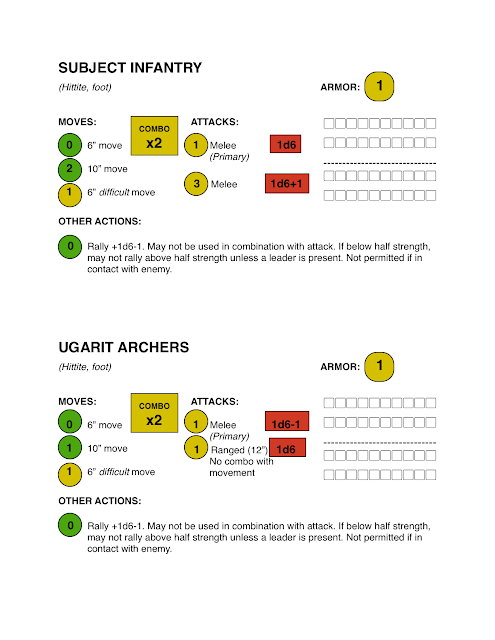 The rows of boxes on the right-hand side are the unit's action reserve, with the dashed line marking half-strength. The costs of the various actions are marked with green and yellow circles; the damage done by their different attacks are marked with red boxes. Some of the actions have accompanying text--there are a number of restrictions on the rally action, and the archers' ranged attack notes that it cannot be combined with a move. This brings up another point, in that certain action combinations are allowed--at the cost of double the combined cost of both actions. Thus, for the Subject Infantry to make a 6" move and use their primary attack would cost (0+1) x2 = 2 points, but for them to make a 10" move and perform their stronger attack in the same turn would cost (2+3) x2 = 10 points... a quarter of their starting action reserve. Terrain effects are hinted at by the existence of the "difficult" move, which also covers other hard-to-perform maneuvers.

Now, as for the changes that will probably result from the Cold Wars game:

These first three changes are intended to address one issue I noted, which was that battle lines seemed a little too fluid, with units ducking in and out of combat a little too readily. This should hopefully add a basic "zones of control" functionality without getting too clunky.

4. Under 5.0: Add the word melee before "combat" to the line "Units with an attached leader may roll an additional die in combat at no additional cost, regardless of what attack they are using."

As it turned out, having leaders boost the effect of ranged attacks ended up giving some units a bit too much firepower, particularly the chariots--and it makes sense to me that the increase in ability brought on by a leader's intervention should be more noticeable at close combat.

Units in N.U.R.D. actually proved to be relatively durable, and leaders are allowed a free move at the beginning of each turn anyway, so the previous rule was not as important as I though it might be--the only leader who was killed in the Cold Wars game was the Egyptian general, whose command died to the last man. Having leaders destroyed along with units should hopefully provide some tension between the desire to keep them alive and the desire to use their improved rallying abilities on vulnerable units.

Other tweaks will come to the units rather than the rules themselves: chariot units will probably have their action reserves reduced somewhat, and rally actions will be retemplated to have a cost of at least one, making the move/rally combo less universally appealing.

If anyone should desire to play around with these rules, feel free to give them a try--while I used them for a Bronze Age game, there's no reason that unit cards could not be made up for troops of pretty much any period. (The colors and shapes on the card are entirely optional--leave them out, or change them to suit your taste if so desired.) And if anyone does give them a try, let me now--I'd be interested in hearing about the results!
Posted by Norman Dean at 8:33 PM