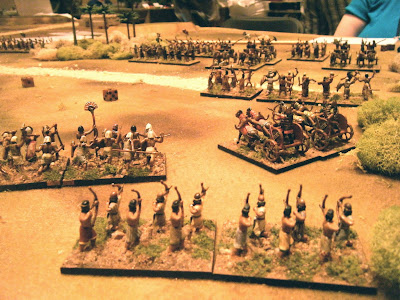 It was a hot weekend in Fredricksburg, VA, but not hot enough to melt lead. Through a quirk of my schedule, I came up from Norfolk rather than down from Germantown this year, and arrived on Thursday night--too late to register for anything, but with a few hours to wander around, look at some of the games on display, and play a quick pick-up chariot game with Dad to remind myself of how my rules work.

Friday morning was more of the same, along with initial visits to the dealer's hall and the flea market. Aside from some dice, my only significant purchase this time around were some "Arcane Legions" figures that someone was selling in the flea market. I must admit that I'm not at all familiar with the system, but I'd heard about the figures on the blogosphere--they're fantasy & 20mm scale, so I figured they might be able to fit in with our "Myborian" Hordes of the Things armies. I ended up with about a dozen centaurs (the main attraction), some Egyptian beasties, and some disappointing "Mongols", and three green-skinned fellows riding some sort of bear-cats who I may or may not find a use for. The factory paint jobs are nothing to write home about, so it may be a while before any of these reach the table.

Friday afternoon we set up the first of Dad's three Not Quite the Seven Years' War games, featuring one of his favorite scenarios, The Wagon Train. Unfortunately, I did not end up taking any pictures, but hopefully some will appear in his report, as my Wachovian cavalry finally had its day of glory--the hussars held up the enemy column by throwing themselves in front of the cavalry escort, while the cuirassiers arrived just in time to mop up and capture the lead wagons. The wagon train had the misfortune to stop about a foot shy of where they needed to be in order for their relief to arrive from the fort, and by the time the 33rd North Polenburg Dragoons showed up on their fine white horses, the wagons were already burning.

Saturday morning I ran the first of my two chariot games using N.U.R.D., which went pretty well--I had four players plus Dad, who got to command the Egyptian left. The scenario was pretty basic, with a chance encounter between Hittite and Egyptian forces trying to determine the loyalty of the nearby city of Jerboa. (Appearing as my newly painted city wall off on one edge of the board.) It was a close fight, but eventually the Egyptians worked their way around the Hittite left and pretty much destroyed that command. The final score was seven Hittite units destroyed to four Egyptian, though both sides had a few more that were in pretty bad shape by the end. 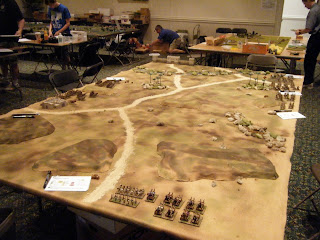 Board set up--Hittites to the left, Hittite allies in the foreground, Egyptians on the right. 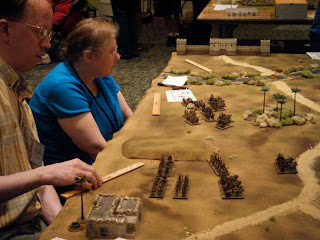 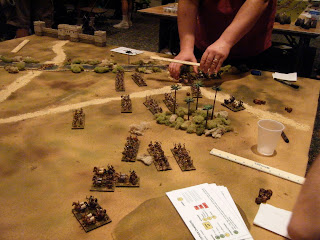 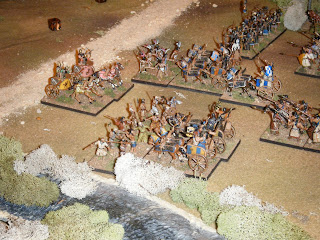 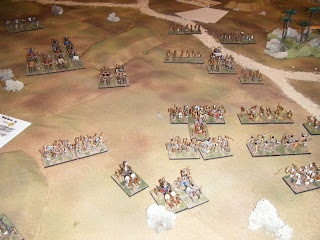 The Hittite ally player arrives, with his four units of light chariots. 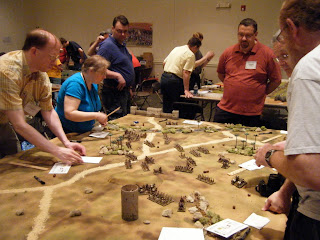 Part-way through the game. 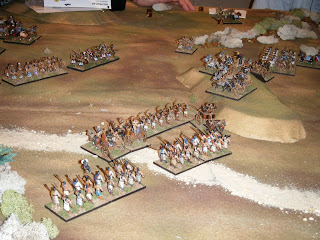 The Hittite center gets a respite. 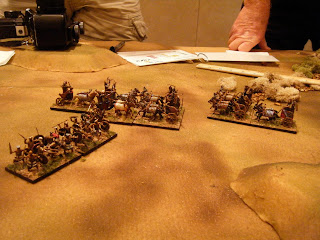 Chariots clash on the Egyptian left.

I was relatively pleased with how the first game went--everyone seemed to be picking up on the rules, the game moved at a decent pace, and the outcome remained in doubt until near the end, when the Hittite casualties started to pile up on the left. My rules adjustments mostly had their desired effect--the battle lines were generally more properly linear than in the Cold Wars game, rallying and moving was no longer the obvious choice, and we had a couple of leaders die. (The Hittite commander, in fact, got potted early when he joined a unit of archers that were a little too close to their breaking point.)

After the first game, I had about an hour to reshuffle the terrain a bit and grab some lunch before the afternoon game. This was to be a reprise of the Cold Wars scenario--the Hittites are attempting to escort a prince and his baggage train off the board, but both sides have some less-than-reliable elements--the allied contingents are more interested in fighting each other, and the Egyptian mercenaries are more interested in looting the baggage train than killing the prince.

With the success of the morning game, a previously tested scenario, and with several people standing by for an open position, I was feeling pretty good about this, but for some reason it didn't quite seem to come together as well as the first game had. A couple of the players had a bit more difficulty with the rules this time, and despite the differing goals, the game ended up as more of a slugfest back and forth across the river. I may have to take a look back at how I set up the board for Cold Wars to see if differences in terrain might partly account for the later. Anyway, in the end, the Hittite ally player killed his hated rival (the Egyptian allied player) and cleared a path across the river for the baggage train, so it was a Hittite victory to balance out the morning's defeat. 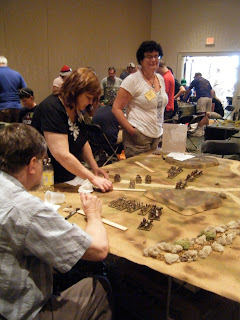 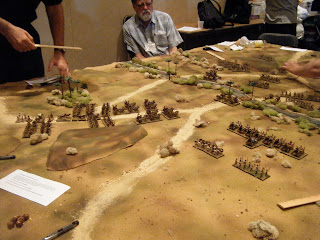 Hittites move up the road. 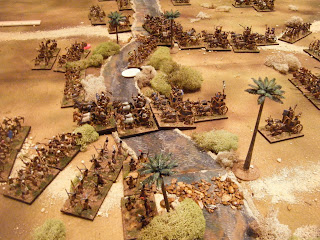 Fighting along the river. 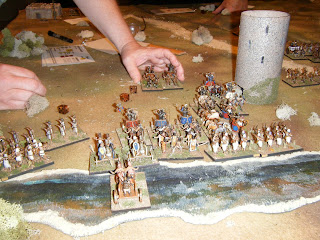 One of the players brought along his dice tower, which blended right in...

Anyway, at the end of the game a delegation came by to inform me that I had won an HMGS "Pour Encourager Les Autres" award, which was a pleasant surprise. (Though with somewhat sinister connotations, for those familiar with the origin of that phrase...) I also garnered a number of compliments throughout the day on the figures, the buildings, and... the groundcloth. (Not that I can claim much credit for that one--it's just spray-painted felt, and I didn't even do the spray-painting.)

I didn't have much energy left after the second game, so Saturday evening I mostly spent helping clan up the casualties as Dad ran his third NQSYW game. (The second one was running Saturday afternoon opposite my second game, so I have no idea how it went--except that apparently my infantry ended up in the first wave of an attack on some buildings, which presumably didn't go so well.) This one was a repeat of a scenario from last Historicon, with the Pragmatic Coalition trying to capture a hill before a Northern relief force arrived, which they succeeded in doing. 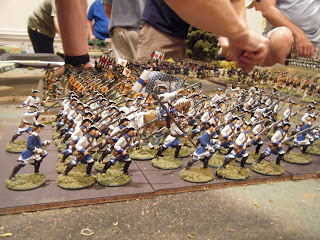 Pragmatic troops formed up before the battle. 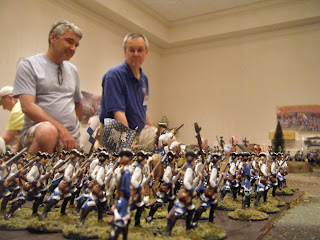 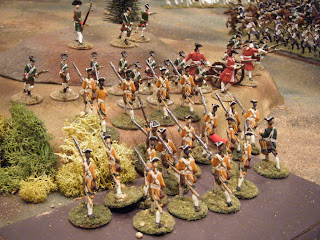 Sunday morning, after one last trawl through the flea market, I sat down for nice quick jalopy race, using the old "Future Race" rules. (I have fond memories of playing in pod racing games with these when I was abut ten years younger.) Alas, somewhere along the way I seem to have lost my knack for it, or maybe it's just that I was bringing a truck to a car race, as I came in dead last. (Though not actually dead, mind you.) After that, it was time for one last lunch with the rest of the H.A.W.Ks and then homeward bound... 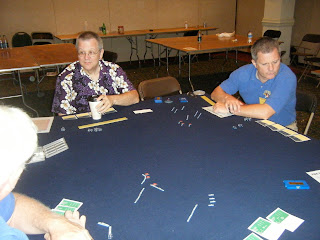 Dad plays a naval game. Despite the shirt, this was the Mediterranean, not the Pacific... 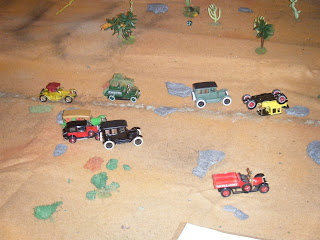 My red truck is in the foreground. This was early on, before I fell behind...

All in all, it was a sort of strange convention--unlike Cold Wars, neither my brother nor my miniatures crony Marc made it down, I didn't buy much, I ended up running more games than I played, and I was pretty exhausted by the end. I still don't know if I'm sold on the Fredricksburg location, even after the second year--the main hall is still echoing and cavernous even with the curtain barriers they put up this year, and the dealer's area seemed kind of under-filled as well. Constantly trekking back and forth to the off-site hotel or the nearby Wegman's gave it an odd atmosphere as well, compared to Lancaster where games, lodging, and reasonable food are all found in the same building. Still, it was an opportunity to play games and run games, and I have a new knick-knack for my shelf, so at least it was not all in vain. 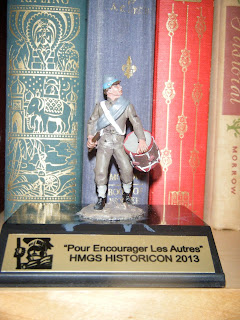