Is it July already? So it would seem, and that means Historicon is just around the corner. I'll be running two games this year, both 20mm Bronze Age using N.U.R.D. I had a couple of items on my to-do list before the convention, and I've managed to accomplish... most of them.

First of all, I have been meaning to repaint the slightly undersized Bronze Age fortress that I bought at last year's Historicon. I'm not sure that I ever took a picture of it in the condition in which I bought it, though the gatehouse piece has probably shown up in the background of some of my HotT battle report pictures. Anyway, it had been a sort of medium brown (mud?) color, and now it is a much lighter plaster/adobe color: 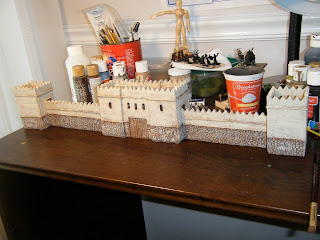 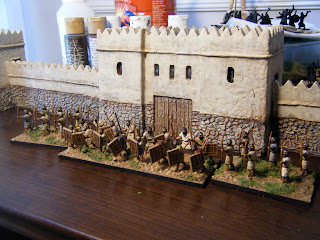 With some 20mm figures for size

Second, I had a couple of half-units of archers that I had been grouping together for conveniences' sake; I've now painted both other halves.
Both of them will be seeing their first action at this convention, along with Dad's new pair of Egyptian chariots. 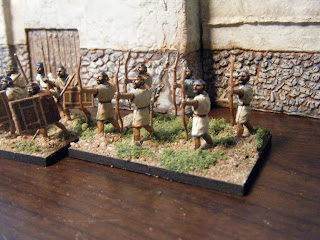 These guys started out as Airfix Robin Hood figures. 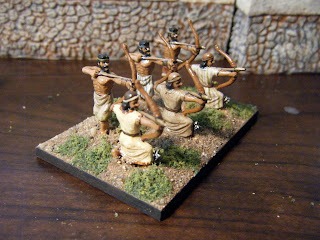 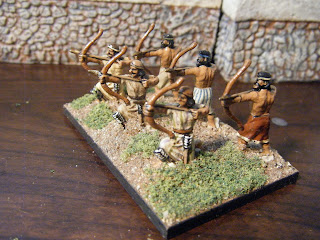 These ones are Caesar Hebrews.

Finally, Saturday morning was spent at the Kinko's down in town, putting together nice laminated unit cards for the various players. I'm hoping that the ring clips will be a convenient way of keeping the cards together and cutting down on table cruft. 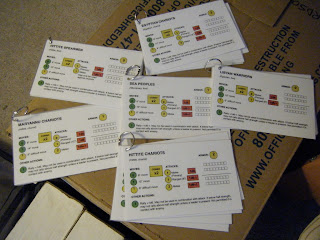 It's still a couple of weeks to go before the convention, but they'll be busy ones for me, so I'm just as glad to have this all taken care of now.
Posted by Norman Dean at 4:25 PM