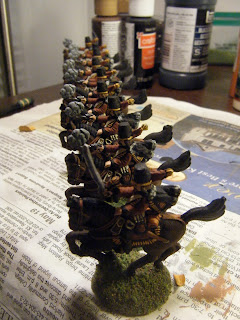 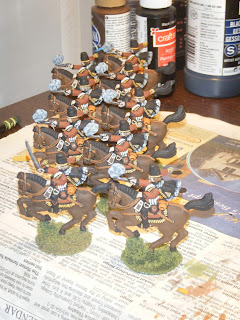 All in all, this puts the total Wachovian contingent at two squadrons of light cavalry, a three-company regiment of line infantry, a company of light infantry, and a two-gun battery. The next unit I add will either be a squadron of heavy cavalry or a company of grenadiers--the former seems a little more likely at the moment, but we shall see where the inspiration takes me. (And I have one other little NQSYW-related project in the works, but more on that in due time...)
Posted by Norman Dean at 8:14 PM 2 comments:

One of the great things about Hordes of the Things is that the troop categories are so loose that it's easy to generate army lists for just about any work of fiction--even ones that would be really difficult to actually find figures for. Since I haven't been getting a whole lot of painting done lately, (certainly not compared to last October) I thought I might have a bit of fun sketching out some Hordes of the Things armies that I will almost certainly never build anyway. First up on the list: the armies of Avatar: The Last Airbender.

(Alright, for anyone who's not familiar with Avatar and is too lazy to read either the Wikipedia page or the TVTropes entry, here's the quick version. Avatar is set in a heavily Asian-influenced fantasy world with a martial arts-like magic system based around the four classical elements of earth, water, air, and fire. The four main factions each use one of these elements. The Avatar, who is supposed to maintain the balance, can use them all, and is reincarnated into a different faction every generation. At the beginning of the story, the Avatar is a kid named Aang, who is the titular last airbender--the rest of the Air Nomads having been wiped out by the Fire Nation sometime prior. If you want to avoid spoilers for the show, you may want to stop reading at about this point.)

THE FIRE NATION
The show's main villains, the Fire Nation tends to be vaguely Japanese in style, but with a fairly unique "Asian-steampunk" aesthetic and a not particularly unique black/red/orange color scheme. Given their propensity for coming up with threatening new steam-powered war machines as the plot demands, their army list is a fairly flexible one. Possibilities include:

THE EARTH KINGDOM
The Fire Nation's most militarily formidable opponent, and certainly the most populous of the major factions. Tend to appear vaguely Chinese in style, with a green/brown/yellow color scheme. Again, a fair number of possibilities as far as troop types go. Possibilities include:
*Potential General options
Stronghold: A section of the invincible walls of Ba Sing Se or other Earth Kingdom city

THE WATER TRIBES
Divided into the Northern and Southern Water tribes, they inhabit the polar regions. Vaguely Inuit in appearance, with a blue/violet/white color scheme. Of the major factions, they probably have the least variation displayed on the show and thus the fewest options as far as HotT troop types go. Possibilities include:
*Potential General options
Stronghold: Small village of igloos for the Southern Water Tribe, giant ice fortress for the Northern Water Tribe.

THE AIR NOMADS
Just kidding! These guys are all dead, and besides, they claimed to be pacifists, bearing a striking resemblance to modern Tibetan monks, and quite unlike historical Tibetans. An army of theirs would be a very chancy thing, given that it would have to consist almost entirely of Magicians, Flyers and Airboats--and to make matters worse, those "airboats" are actually six-legged flying yaks. Good luck finding models of those.

TEAM AVATAR
Instead, let's take a look at our protagonists and a few of the miscellaneous people they meet on their travels. Note that this list could also draw from pretty much anything on the Earth Kingdom or Water Tribe lists as well.
Stronghold: Random village, or any of the non-Fire Nation options

Unfortunately, despite the real-world influences, the visual appearance of the world of Avatar is pretty distinctive. I expect that putting these armies together could be difficult even in 25mm, and pretty much impossible in 20mm, as Asia is a chronically under-represented area of the world. Maybe in ten years, if Caesar Miniatures keeps issuing sets like these...

Anyway, I may do a few more "Hypothetical Hordes" entries at some point. If you have one you'd particularly like to see, feel free to leave a note in the comments...
Posted by Norman Dean at 8:18 PM 2 comments:

Some of my gentle readers may at times have been bewildered by the various fictional countries featured in the battles of Not Quite The Seven Years' War. For their benefit (and to aid my fellow heads of state in planning their future campaigns) I present the following map: 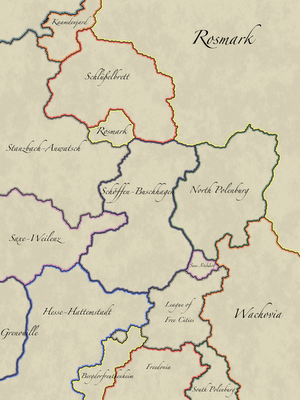 Cities, mountains, rivers, etc. will hopefully be added at a later date...
Posted by Norman Dean at 7:34 PM 5 comments: