A new toy for an old army

My Mongol army has been featured on this blog quite a few times over the years - it was one of the first I started building back in 2011 or so, and it has seen plenty of action since, though usually in a fantasy guise. So, when I started leafing through the DBA army lists last year, I was pleased to see that I had already enough Mongols to serve as the core of a IV/35 Mongol Conquest list* - there were just a few units I could add to have all the available options, and one of them was an artillery piece.

Well, my dad happened to have a spare box of Zvezda Siege Machines - Kit 1, and I still had plenty of dismounted Mongols (also of Zvezda manufacture), so I decided it was time to put something together. I liked the look of the ballista better than the catapult, and from the sources I could find it appears the Mongols were happy to use any and all types of artillery, so that's what I went with. The kit was a little more fiddly than my usual fare, but it ended up fitting together pretty neatly. 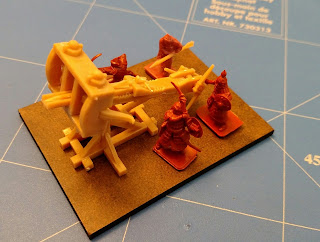 The ballista, assembled but unpainted. 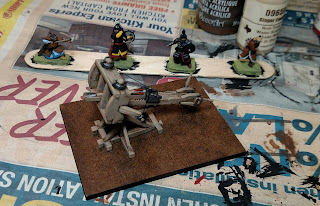 Painting the ballista, with the crew in progress in the background. I took my best guess at which parts were supposed to be wooden and which were metal. I used thread for the ropes, rather than the plastic bits that came with the kit.

The crew - maybe not the most likely set of poses, but they were what I had available. The guy on the far right is intended to be holding a lance or spear; I gave him a spare ballista bolt instead. His Safety Officer might not approve of how he's carrying it... 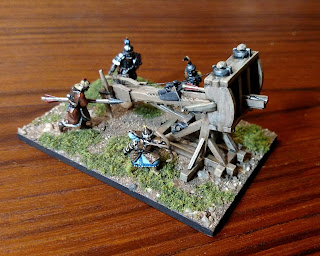 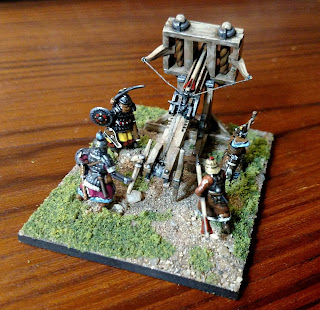 The final product, ready to be deployed.
This ended up being a fun change of pace, and I'm curious to see how it will play, whenever my Mongols get a chance to take the field again. (Maybe once I find them some suitably historical opposition.) I have used Artillery in Hordes of the Things before, but my experience with it there has been lackluster to say the least - hopefully it will hold up better in DBA!
*Turns out, there were actually six DBA armies that my existing Mongols could double for in a pinch: III/11b Central Asian Turkish, III/30b Magyar, III/44 Tribal Mongolian, III/74a Seljuq Turk, IV/35 Mongol Conquest, and IV/67 Jalayirid. Any of these can be deployed as Cavalry general, 2x Cavalry, and 9x Light Horse, which is what I had on hand.
Posted by Norman Dean at 1:50 PM 2 comments: