Last Saturday I went up to Lancaster, PA, for a quick visit to the HMGS fall convention, Fall In! Dad had originally planned to come along, but was drawn away by other concerns, so it was just my brother and I. After a fortuitous stop at a gas station which provided us with an opportunity to supply ourselves with Thin Mints and Tagalongs from a local Girl Scout troop, we arrived at the site around noon. We made a brief survey of the flea market and dealer's hall (no purchases of note), then sat down to assess the Saturday afternoon gaming options.

William was of a mind to play something medieval, and after some searching we both ended up with tickets for a Wars of the Roses game using the "A Coat of Steel" rules. The game was short a player, so William and I ended up taking command of the Lancastrian army (seemed appropriate given the venue) against a trio of Yorkists. (In retrospect, this was probably a mistake--the Wars of the Roses are an obscure enough conflict that anyone interested enough in it to run a game is probably has Yorkist sympathies...)

The scenario was fairly straightforward, but the game had a couple of interesting mechanics. First was the orders: each command had a limited pool of orders to start with. Once an order expired or was replaced, it was gone for good. (With the exception of a default move/attack.) While I do like the concept of orders being a finite resource (and my own rules, N.U.R.D, have a vaguely similar mechanic), I had a couple of issues with this in practice. For one thing, this particular scenario gave everyone basically the same selection of orders to choose from, which made things somewhat predictable. For another, I kept wishing I could give different orders to the various units under my command, rather than one for the whole force--so that my archers could keep firing while my Irish kerns moved up, for example.

As it was, our army basically advanced while the enemy stood in place and shot at us. After a few turns of this (occasionally pausing in our advance to return fire) we got to within melee range. This was where the other interesting mechanic came into play--when two units met in combat, each player would select one of about six "strategy" cards. The combination of the two players' strategies would determine how much of each force engaged, what the stakes would be, and would possibly provide some bonuses to one side or the other before the dice were rolled. After a couple of rounds of this, I started to get a feel for the rock-paper-scissors aspect of this, and started to gain the upper hand in the card selection. Unfortunately for us, there was still dice-rolling involved, which didn't go so well, and our lower starting morale combined with the effects of their archery meant that all our units broke first. (Not to mention a couple of our leaders managed to get themselves killed at inopportune moments.) So much for the Lancastrian cause. 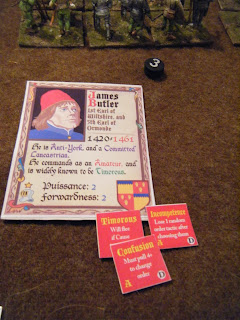 My commander. What a guy! 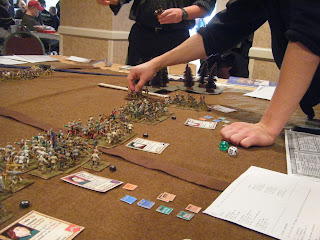 We begin our advance. 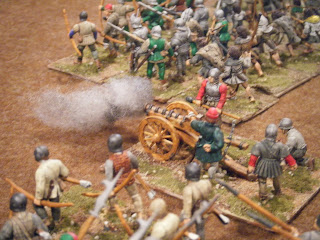 These things were basically useless. 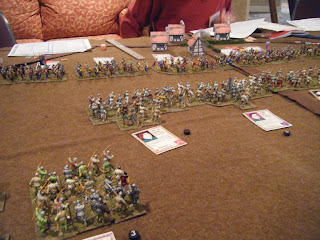 My units on the left were confused (see: my commander) and couldn't advance. 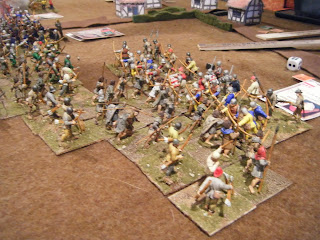 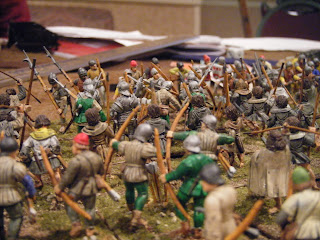 Scuffling in the center.

After that, we took another look through the flea market and dealers' (William picked up some HaT El Cid figures for one of his projects) and took a look at some other games that were running. I had other plans for Sunday and did not want to stick around too late, so rather than looking for an evening game, we found spots in a workshop on 3-D printing for wargaming. While I'm not a convert yet, I'll be interested to see what things will look like as this technology continues to improve, and I may look into the possibility of having some accessories commercially printed--20mm shields and spare weapons seem like they'd be within the realm of possibility, and could come in handy when doing conversions like my Byzantine cavalry earlier this year... 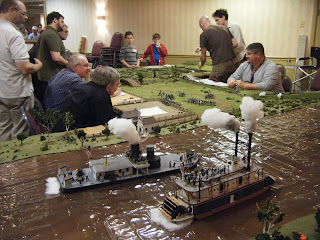 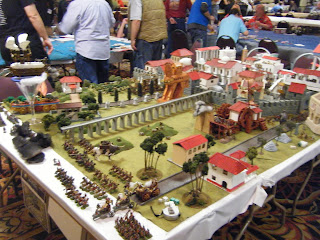 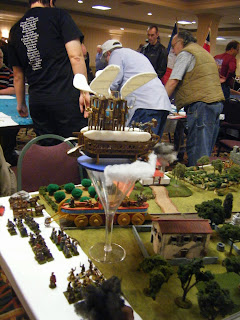 ...including some sort of flying galley. (Sky-reme?) 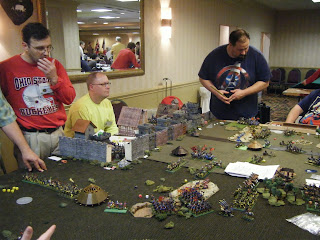 All in all, an interesting trip, though a brief one. Haven't been doing much painting lately, and what with the holidays and other factors my time may be limited, but a NQSYW campaign remains on the near horizon...
Posted by Norman Dean at 2:53 PM No comments:

Armies for the Archbishop

With another campaign in the Not Quite Seven Years' War on the horizon, Dad and I have been working on filling out a few more units--the other weekend we based up almost two full cavalry regiments (as seen here) and found that they would need a few more command figures. I ended up taking home the officers needed for the Archbishopric of Schlüsselbrett's cavalry regiment, and now they are complete: 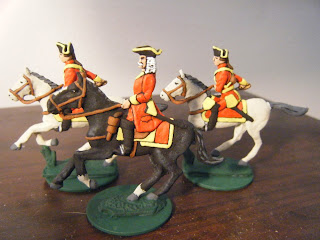 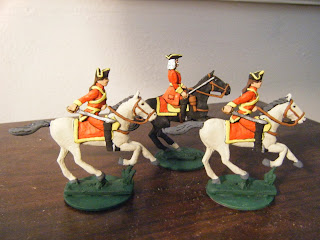 I ended up painting these mostly in my own style, rather than trying to match the one existing officer, though I did try to keep to the original color scheme. I'm sure that when deployed en masse, they'll fit right in. The colonel on the black horse had some mold defects on his face, hence his somewhat squashed nose and extra-bushy mustache.

I haven't quite decided what I'll be painting next after this, but whatever it is, it'll probably end up some shade of blue: between these and my previous fantasy figure, I'm feeling a bit of red/yellow fatigue. Then again, once the campaign starts up, I may need to paint some more Wachovians...
Posted by Norman Dean at 8:33 AM 2 comments: