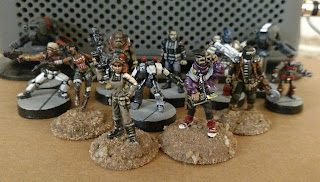 For the past couple of years, I've been getting together with some folks from the HAWKs for monthly skirmish games - 2018 and 2019 were Frostgrave: Ghost Archipelago, 2020 was going to be This Is Not A Test (a post-apocalyptic game that ended up getting preempted by an actual apocalypse), and this year we're giving Stargrave a try. Stargrave is set in a pretty vague science fiction setting that reminds me mostly of Firefly with a touch of Star Wars - lots of space pirates and not many responsible adults. In June we played a test game, and since then I have been busily painting up a crew in preparation for this month's game. I probably won't end up keeping a detailed account of the campaign, but I thought it might be fun to introduce the crew of the Mostly Harmless. 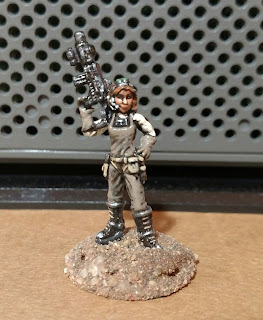 Our captain, Martya Mickiewicz, a Robotics Expert. During the Last War, she rescued the Adams-class robofreighter Mostly Harmless, and she and the ship basically ended up adopting each other. Since then, they have put together a "salvage & retrieval" business, and picked up various crew along the way, mostly for their particular skills. (Figure is "Rosie, Chronotechnician"). 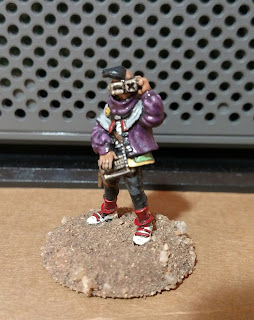 The first mate, Ken Mori, is a young technolyte from Kanto Station, who fled after the mysterious death of his sensei. He still tends to dress in the Cybertraditionalist garb that echoes the Dawn Age of Computers. However, despite his odd archaic appearance, his computer skills are second to none. (Figure is "Devo Ranks, Cyberist"). 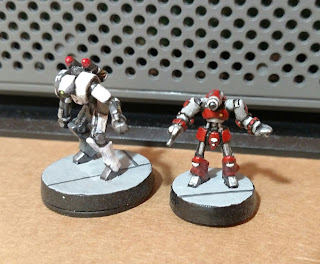 EM-1LY (left) and T1D-B1T (right) are Martya and MH's robotic "kids". EM-1LY is the solid, reliable one, while T1D-B1T tends to wander off and get into mischief. (Figures are Medium and Small XairBots) 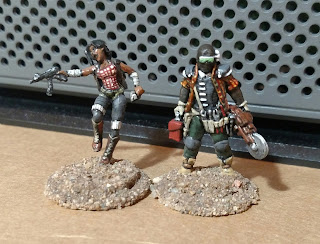 Ani Hernandez (left) and Zeke Nwamu (right) are old comrades of Martya's from the War. Ani is a biologist and the closest thing to a ship's doctor; Zeke is a mechanic and also the ship's cook. (Figures are "Bonnie", somewhat modified, and "Chit Jubal, Arkos Chopper.") 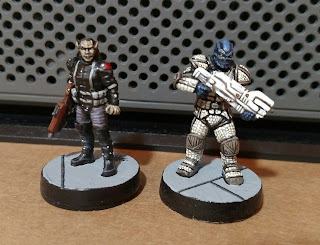 Sezem ka' Tlon (left) and Gunnush (right) are a bit of an odd pair - their species are traditional enemies (and they fought on opposite sides of the Last War) but ever since the crew of the Mostly Harmless rescued the two of them from the prison of the Black Comet gang, they have started to build a grudging respect for each other. (Figures are Rach and Malvernis soldiers.) 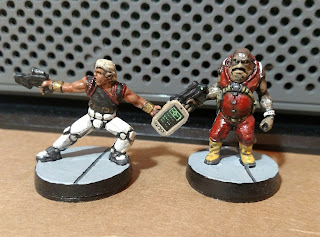 Xander Ras (left) is another recent recruit. He lost both legs as a child during the War, but since he joined the crew, Zeke and Martya have been able to upgrade his prosthetics considerably. Sqwchgy (right) comes from a planet whose inhabitants spend most of their lives in a sessile, tuber-like form. Sqwchgy intends to spend its motile years experiencing as much of the galaxy as it can. (Also, it regards "potato head" as a deeply insulting form of address.) (Figures are "Rand" and "Space Henchman"). 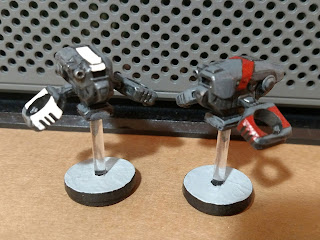 Finally, these are two of the ship's drones, Whiskey (left) and Romeo (right) - they function as the eyes and ears of Mostly Harmless itself while the crew is on a mission. (Figures are Sentry Drones with the large guns removed.)
Posted by Norman Dean at 7:57 PM 3 comments: