While casting about for something a little different to paint after finishing up my most recent DBA army, I was reminded that this month is Orctober! As it happens, I did have some orcs in need of painting. In fact - I had orcs in two different sizes!

First up is a somewhat belated addition to my 20mm Orcish army for Hordes of the Things. It looks like the last time I painted any of these was about eight years ago, but they have seen plenty of action since then - most recently, as it happens, while on loan to my dad. At the time all that was available was Caesar's original set of orcs, but in the years since they have come out with a second set. My dad picked up a box of these a while back, and passed along to me a spare shaman, which spent some time rattling around my bits box. I finally plucked him out of there this month, and found a couple of leftover orcs to provide him a pair of bodyguards. In Hordes of the Things, he should work as a Magician or possibly a Cleric. 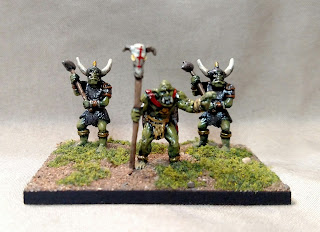 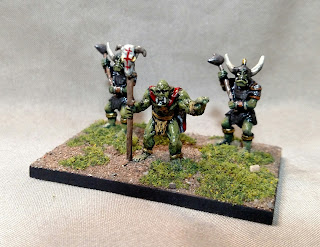 The other orcs are more of the Reaper Bones line, in 28mm (though these guys are probably a bit bigger than that, being pretty burly!) Reaper bills them as a Slayer, a Chopper, and a Sniper. I've been working on these much more recently, to be used either for D&D or some sort of fantasy skirmish. With these three, I should now have enough for an entire crew in Ghost Archipelago, should I so choose... 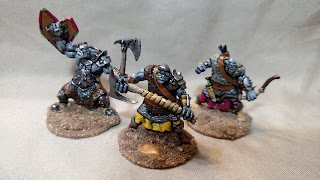 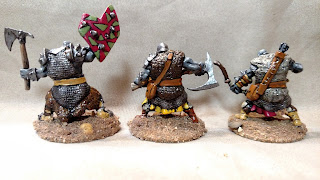 (Incidentally, you may note that my 20mm orcs are green, and my 28mm orcs are gray. Why is this? Well, green skin seemed like a natural enough choice back when I was painting my original 20mm orcs, but in years since I have come down on it a bit - orcs in Warhammer or World of Warcraft might be green, but it's a pretty unusual color for mammals in the real world. When it came time to paint some 28mm orcs, I decided I wanted something different - I wanted a color that was fairly neutral, while also avoiding real-world human skin tones. Hence, gray orcs.)

With these guys out of the way, and Orctober drawing to a close, it will be back to the Bronze Age soon. I have my eye on a sixth army, and I might be able to finish it before this year is out... 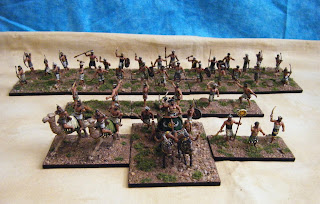 So here I am again, with the fifth of my four planned DBA armies. Yes, that's right, there's some mission creep going on, and it's an exciting tale of head transplants and Biblical controversy! It starts with most of a box of the Caesar Arab Camel Riders and Bedouin I had left over after finishing my Syro-Canaanites. At some point I realized I could just squeeze out a I/6a Early Bedouin or I/6c Early Aramaean army from the remainder and a few other figures I had on hand. These lists represent a variety of early desert nomadic peoples who inhabited the area during the Late Bronze Age, and should be appropriate opponents for my existing armies.

Both army lists have an option for either a fast auxilia or fast warband general. The Aramaean list has the alternative of a light chariot general instead. The auxilia/warband general was simple enough - these are taken directly from the Caesar Bedouin set, with a standard put together out of bits and pieces. The chariot is one of the trusty Caesar Mitannian Mariyannu chariots. The chariot driver is from the Bedouin set; the archer is the first of our head transplant patients. He's one of the archers from the Mariyannu set, but with his head replaced by one of the archers from the Bedouin set. One of the accompanying chariot runners is another - the man with the shield is from the Caesar Sea Peoples set, but with a replacement sword and a head taken from the Airfix Robin Hood set. 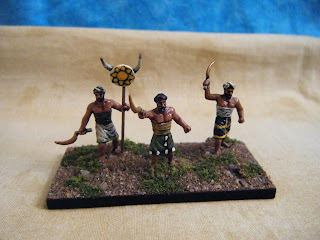 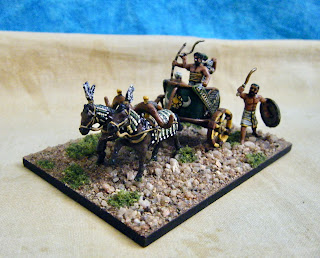 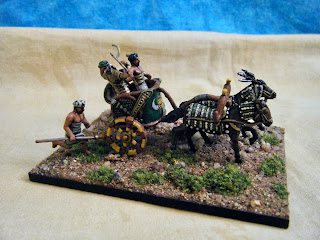 A second view of the chariot

The core of both armies is mass of fast auxilia armed with javelins: six in the I/6a list, or five in the I/6c list. These are mostly Caesar Bedouin, bulked out with a few Sea Peoples given replacement weapons.

Both lists have a couple of stands of archers - the I/6a list can deploy these either as psiloi or as fast bow; the I/6c list only as psiloi. However, the Bedouin set contained only four archers, and to cover all the options I needed ten! (Not to mention, I had already borrowed one of their heads to give to the man in the chariot - fortunately another Robin Hood figure supplied a replacement.) Scrounging around, I turned up two Hebrews and four Hittite archers in kilts who could blend in well enough. 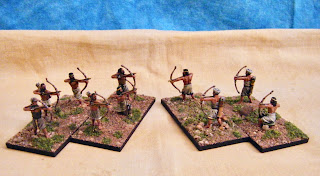 Archers as Ps or 3Bw

Possibly the toughest units to fill out were the slingers - I needed six (enough for three psiloi units), but the Bedouin set does not actually contain any. I had one spare swordsman who I could convert to be whirling a sling instead of raising his sword. For the rest, I turned to some HaT Punic War Spanish slingers, doing my best to carve their tunics down to bare skin or the chest-wrap thing that the Bedouin figures seemed to have. In the end, they came out a little rough, but I think they'll do fine on the table. (My biggest problem with them is their proportions - I'm pretty sure their arms would go down to their knees if measured out. Possibly they are part orangutan?) 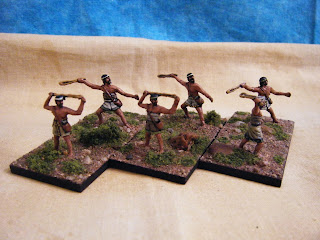 And finally we come to the most controversial element: the camelry! The I/6c Early Aramaean list gets to deploy a single stand of camelry or light camelry. The Caesar set contains a pair of dromedary camels, each with two bow-armed riders. Simple enough, right? Except:

1. The figures in the Caesar set are clearly based on Assyrian wall reliefs that are at least 500 years too late for the period I'm working on.

2. Current archaeological evidence suggests camels had not really been domesticated yet, as of the Late Bronze Age (~1200 BC). To make matters worse, the earliest camels used in Mesopotamia may have been two-humped Bactrian camels rather than one-humped dromedaries.

3. Certain religious organizations are nonetheless insistent that camels must have been present, because Abraham is said to have owned camels, and Gideon from the Book of Judges is said to have faced an army of Midianites and Amalekites, "whose camels were as numberless as the grains of sand.*" (This cleared up something I had been wondering about in the DBA army lists. You may have noted I have not mentioned a I/6b army list - and that's because it represents these Midianites, Amalekites, and early Arabs, with a whopping five units of camelry!)

But despite being anachronistic at best and erroneous at worst, I had the camels and figured I might as well paint them. (And to be honest, it's hard to resist the opportunity to paint animals that aren't horses.) I did swap one of the riders' heads with an infantryman for a little more variety. 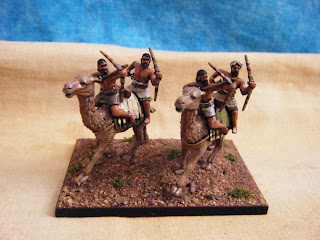 Wait a second, who's steering these things?

And that covers my unexpected fifth DBA army! My plan now is to work on some fantasy figures for a while, but we'll see. 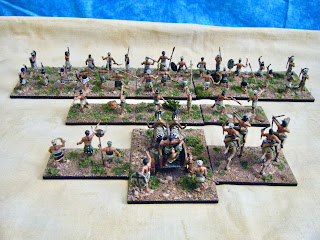 A final view of the whole army together.