A few months back, I wrote up a post exploring how one might put together some Hordes of the Things armies for Avatar: the Last Airbender. This time, I'll be looking at a different setting--the World of Two Moons, home of the Elfquest comic series.

(For background on Elfquest, here are the Wikipedia page and the TVTropes entry. Or you could read the comics themselves, which are freely (and legally!) available online. For purposes of today's discussion, I'll just be looking at the original series, though some of the later series would provide additional army possibilities. The story centers around the adventures of Cutter, chief of the Wolfriders, a tribe of elves who are forced to leave their forest home, and who encounter quite a number of other elves and other people along the way. Note that the elves of Elfquest differ significantly from the Tolkein-derived elves who inhabit a number of fantasy worlds: they tend to be somewhat slight of stature compared to humans, have pointy ears and four digits per hand, inhabit a wide range of biomes, not just forests. Some individuals exhibit a variety of psychic powers which border on magic, most notably telepathy, healing, occasional shapeshifting, and the ability to mold certain materials such as wood and stone. They are also aliens--their ancestors crashed on the World of Two Moons some millennia ago, where they were set upon by the natives of this world: humans.)

Anyway, on to the armies. Spoilers are entirely possible from here on out; you have been warned!

THE WOLFRIDERS
The protagonists of the story, the Wolfriders have one main problem from a Hordes of the Things standpoint--there aren't very many of them. As in, maybe a couple of dozen, max. So the ranks are going to have to stretch a little thin here. Fortunately, they have all these wolves handy, and despite the name, they're not just for riding, so we have some dismounted options as well. Possible troop types include:


Stronghold: The Holt--a grove of trees which have been shaped into dwelling places and protected by magically-enhanced thorns and such.

THE SUN FOLK
The first new group of elves encountered by the Wolfriders, the Sun Folk are dark-skinned, desert-dwelling farmers who have faced no outside threats in generations. While not really army material (many of them may not know which end of a sword to pick up) they are included here for completeness' sake. A few more adventurous examples may be found in other armies.
Stronghold: Village of rounded pastel-colored adobe buildings. Sun Folk architecture seems to have taken the teapot as its model...

THE GLIDERS OF BLUE MOUNTAIN
These enigmatic and vaguely sinister elves live within a mountain--only a few ever venture into the outside world, borne on the backs of giant birds. A number of them can levitate or even fly using their innate powers as well, hence their name. They claim to be the true heirs to the original High Ones (the ancestral elves) and are about as close as Elfquest gets to the Vestigial Empire trope.
Stronghold: Magically-operated door set into a mountainside.

THE GO-BACKS
The last group encountered by the Wolfriders, the Go-Backs inhabit the far north, where they are locked in an age-long war with Trolls over the Palace of the High Ones (the ship which brought them to this world.) Noted for their low levels of magic capability and higher birthrate. (For elves, anyway.) Troops include:
Stronghold: A sort of lodge, partly underground, partly constructed of wood.

Besides the elves, there are two other groups to consider:

HUMANS
The setting of the original Elfquest series shows the human inhabitants of the World of Two Moons at a basically Neolithic level of technology. None of the tribes shown seem to have much by way of domestic animals, nor do they exhibit any of the elven magic or psychic abilities. Therefore, human armies would be pretty simple:
Stronghold: village of simple huts.

TROLLS
Squat, green-skinned, skilled at metal-working and preferring to live underground, the Trolls of Elfquest are more like orcs and dwarves of other settings than the usual fantasy troll. Along with the Preservers, their ancestors were brought to this world by the High Ones. Troll armies might include:
Stronghold: Extensive network of caverns.

With that, I will end another look at "Hordes of the Things armies I will never build." If there are other fantasy settings you might be interested in seeing me cover at some point, let me know in the comments!

Way back in June I painted up a sample stand of Strelets medieval Russian cavalry as the first of a "Byzantine" army. Since then, Orion has released a couple of sets of Byzantine infantry, and I have bought some of said infantry. And now at last that first stand of Byzantines has some company: 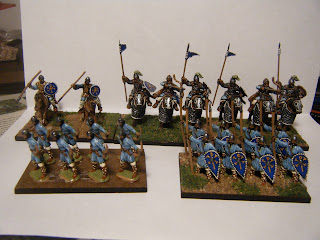 The first new unit I completed was a second stand of the heavy cavalry. As mentioned, these guys are Strelets--specifically the standard-bearers from this set with the flag swapped for a lance made of brass wire, and a couple of archers mixed in. The kite shields on the lancers are another addition, from the Zvezda Russian foot. It's a good thing these guys are up on horses and not standing next to anyone else, because they're definitely typically Strelets, proportions-wise. (Especially compared to the infantry, their heads are massive--it's like a watermelon next to a grapefruit.) 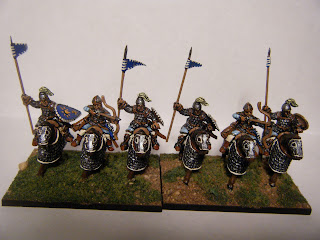 Originals are on the right; new guys on the left. 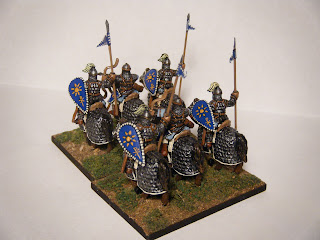 Next up are some infantry. These guys are from the recently released Orion Byzantine Infantry (10-13th Century) set. (So recently released, in fact, that Plastic Soldier Review still hasn't reviewed them!) As with many Orion sets, these guys had a lot of flash on them. Some parts of the sprue get it worse than others--the archers, which will be showing up later in this post, were on the good end of things, but these spearmen took a fair bit of carving. Still, I think the results were satisfactory. The one odd thing about these guys is their foot gear--they appear to have some sort of lacing that goes up to the knees, which is molded on the figure but very difficult to paint as-is--the detail is just too fine. I ended up painting a sort of simplified pattern over it, but I can't decide whether the end result is more "argyle socks" or "fishnet stockings"... 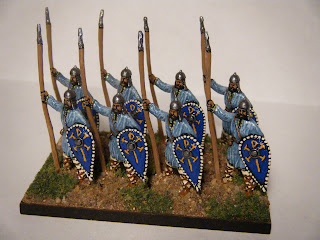 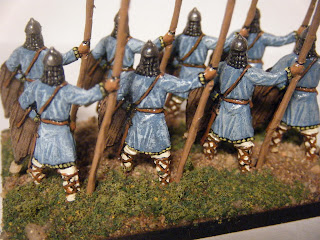 Back view, with another angle on those leggings.

After that, it's back to horsemen--light cavalry this time, armed with javelins or perhaps a sort of light lance. These are intended to be something like trapezitoi, but may be less than perfectly historical, since they're converted out of HaT El Cid Spanish. I did a little carving on these guys--the Spanish have these baggy trousers (or possibly ankle-length tunics) which I cut away in an attempt for a tighter-fitting look. I think I could have cut even a bit more, and I may try that with the next stand when I get around to them. A sort of light padded or leather armor has been painted on over the original tunics as well. Also, by this point you may have noted that I'm trying for a consistent color scheme for this army, and similar shield designs as well... 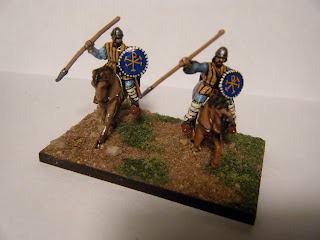 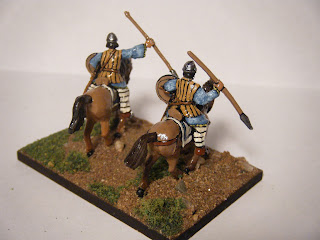 Finally, the archers--again from the Orion set, and actually much the same as the spearmen, right down to the argyle socks. These guys are still waiting to receive the full basing treatment... 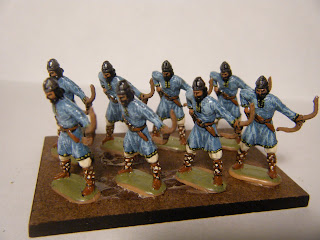 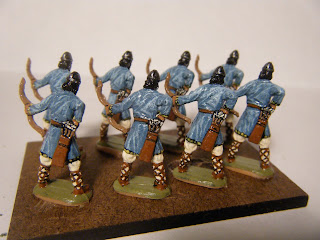 All in all, this puts me almost halfway to a Hordes of the Things or DBA army. I'm currently hoping to have some version of the army ready by February, but we'll see how that goes...
Posted by Norman Dean at 9:29 PM 3 comments:

While I don't hold much truck with New Year's resolutions in general, I'm always happy to talk about future projects. (After all, it's way easier to talk about things I'd like to paint than to actually paint all of them.) So in that spirit, I have a list of painting goals for the new year. (Goals might be too strong a word here--"intentions" might be a better choice, though of course the road to a mountain of unpainted miniatures is paved with such...)

But first, the gloating! In this case, just a quick tally of what I got done in 2012:


This probably glosses over a few other random bits and pieces of things done here and there, such as touch-up on a couple of NQSYW flags and artillerymen. Onto the plotting! These are things currently on the radar, which I'd like to get done in 2013:
And if there's one thing I'm certain of, it's that at some point I'll end up painting something not on this list. In fact, just the other day, I was considering how I might put together an Amazon army for 20mm Hordes of the Things...
Posted by Norman Dean at 9:01 PM No comments: