Even as I was wrapping up my Aztec army last year, I found myself wondering if I could pull together one more Mesoamerican DBA army - preferably one that could be an opponent for either the Aztecs or the Maya. As it happens, there was one plausible candidate - army list IV/19a. This list covers a whole swath of Mesoamerican groups, among them the Tlaxcalans. The DBA version of the army is heavy on bowmen, and as it happened I had quite a few archers left over from the Aztec project. I decided to see what I could piece together - and for those who are interested in the process, I wrote about it in a thread over on Benno's Figure Forum. 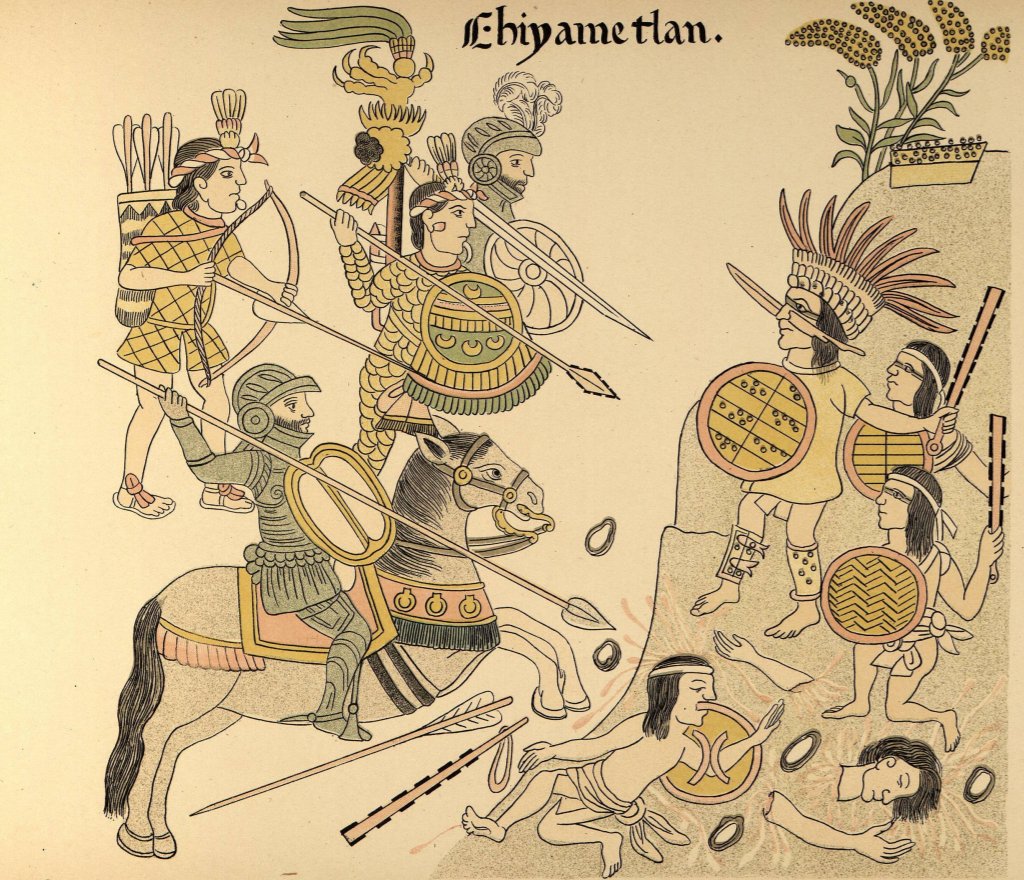 (In brief: I took a great deal of inspiration from the Lienzo de Tlaxcala, a record put together post-Conquest by the Tlaxcalans themselves to document their role as Spanish allies. It's made up of about a hundred illustrated panels which run together in a narrative almost like a comic strip. As far as the figures go, they are mostly a mix of the Revell and Caesar Aztec sets, with a lot of conversions.)
Now, at last, the army is complete!
First up, our Tlaxcalan generals, as suit-wearing warriors who can be either solid Bows or fast or solid Blades:

The IV/19a list includes two additional units of fast or solid Blades. Unlike their Aztec counterparts, the Lienzo depicts most of the Tlaxcalan warriors without animal headdresses - the exceptions tend to be either feline or canine rather than avian. (One thing I learned while working on this project: the "crocodile" headdress that shows up in both the Aztec sets is probably supposed to be a stylized coyote and not a crocodile at all!)

The IV/19a list also calls for three stands of solid Bow. Per the description in the DBA army list, I depicted these units with two archers and two warriors with shield and maquahuitl - partly to help distinguish them from the fast Bows, and partly because I didn't have quite enough archers and wanted to avoid having to buy more!

The fast Bows, of which there may be up to five. There are a few converted Robin Hood figures mixed in among here...

In the IV/19a list, one of the fast Bows may be replaced with a fast Warband unit of Otomi allies. Unfortunately I was not able to find any good pictorial sources on the pre-contact Otomi, so they are a little fanciful.

Finally, one unit of psiloi - these are actually Atlantic Egyptians, as I had used up my stocks of Aztec bowmen.

A couple of views of the whole army together:

But wait, there's more! Although my primary goal was to build the IV/19a list for the pre-contact era, in the end I also put together the four Spanish units needed for the IV/19c list variant, which covers the Tlaxcalan/Spanish allied forces.
Here we have the Spanish general, as a unit of knights. The rider on the left is from the old Revell set of conquistadors; the other two are from the more recent Caesar set - though the man with the raised spear has a substitute horse for size compatibility.

One unit of Spanish sword-and-buckler men, as solid Blades. While I kept mostly the same overall color palette for the Spanish as for the Tlaxcalans, it was quite a change to go from the intricate designs on the Tlaxcalan shields to the plain metal of the Spanish...

One unit of Spanish crossbowmen and arquebusiers as solid Crossbows.

Finally, the Spanish get to deploy a falconet or similar small cannon as a stand of Artillery. The crew, the gun barrel, and the carriage are from one of RedBox's sets of Spanish sailors; the wheels are taken from another set. (There are a few panels of the Lienzo that depict Spanish cannons; they are shown there as having spoked wheels.)

Here's a shot of the Spanish contingent all together, and one more of the combined Spanish-Tlaxcalan army:

And with that, I am just about done with my adventure into Mesoamerica! I do owe all three armies some camp followers, but I think I am about due for a break - hopefully both to work on some other projects and to actually play some games!
Posted by Norman Dean at 3:44 PM 4 comments: