As mentioned in my previous post, for years I have had a stash of Revell Aztecs awaiting the day when my childhood interest in the period would be rekindled. Well, the day has finally come, though the road was a long and winding one. Since the beginning of last year, I have been working on building various armies for DBA 3.0, and the Aztecs were one that I noted as a possibility based on the figures I already had around. I was eventually tempted into buying some of the more recent Caesar Aztec Warriors to supplement what I already had, with the end result that their intended opponents, the Maya, got painted first. However, after a couple of months of painting, the Aztecs are finished at last! 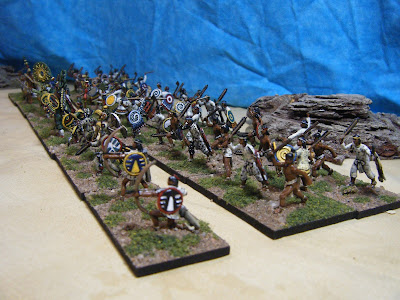 After the trouble I had finding sources on the Maya, I was pleased to find that original sources on the Aztecs are far more detailed and plentiful, in the form of various codices compiled shortly after the Conquest. Some of these are even scanned and freely available online through various academic institutions. Pictures from the Codex Mendoza were especially helpful: 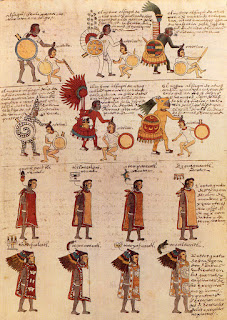 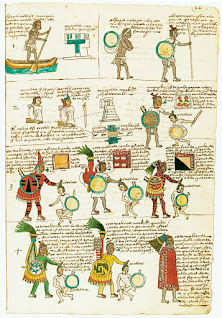 However, the downside of this is that I became more aware of some odd choices made by the figure sculptors. The Aztec military seems to have been fairly well-organized, with rank and accompanying insignia (in the form of colorful suits, pamitl back-banners, hairstyles, etc.) being awarded to warriors based on their prowess in capturing enemy prisoners. Some of these ranks are well-represented in the extant plastic sets, others (particularly the lower ranks) much less so. The older Revell set in particular has some very odd mix-and-match going on - there is at least one figure who seems to be dressed and armed like a common warrior but with the hairstyle of a priest from the nobility!
The Revell figures also suffer from what I consider to be a flaw in that the shield designs are molded on. I much prefer to paint my own - in fact, it's generally one of the parts I enjoy the most. Some of the Revell shield designs are well-attested; others less so. After painting a few of them as-is, I started carving off the existing designs and painting on some different ones. This resulted in more than one inadvertent blood sacrifice as I jabbed myself in the thumb! The Caesar set has plain shields, but are a much smaller proportion of the army - there's generally about one per stand. 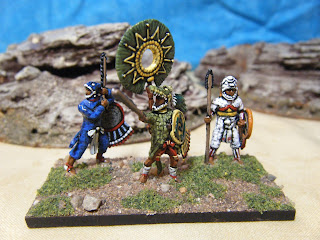 The general, rated as a fast Blade in DBA. The center figure in the crocodile costume is one I was unable to find any source for, though he does look very commanding! 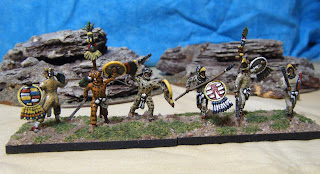 Two more units of fast Blades, representing the Jaguar and Eagle military orders. I was interested to find that the jaguar costumes were probably not made of actual jaguar hide, but rather quilted or hardened cloth covered with colorful feathers for decoration. 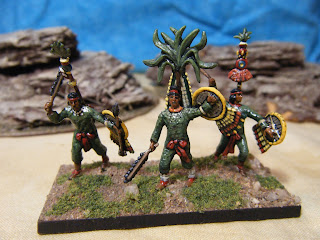 The DBA list includes one element of "Ontontin or Cuachic shock troops" as fast Warband. These were warriors who had taken five or more captives. The Ontonin, from what I can tell, wore green suits; the Cuachic wore yellow and had a distinctive hairstyle that I was unable to replicate. These figures are actually conversions; the center figure was a Revell Eagle knight with a head swap; the one on the right was a slinger but I gave him a war club and a shield instead. All three have pamitl banners added. I think the center banner rather resembles a pineapple; I haven't figure out yet if this is just a coincidence or not. 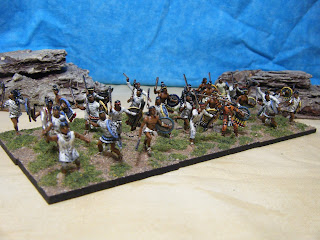 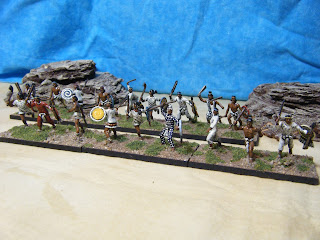 The bulk of the army is six units of ordinary warriors, classed either as fast Hordes or fast Auxilia - I painted both options. The Horde option seems to be what makes the army somewhat unique in DBA terms, though I suspect the Auxilia option might be better in a tactical sense. Most of these are dressed in plain white, though there are a few more colorful fellows scattered in amongst them. 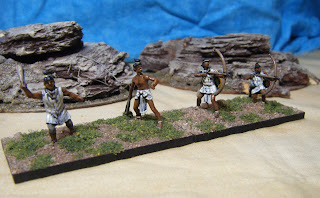 Finally, we have a couple of units of psiloi/skirmishers with slings and bows - not much more to say about them!
A couple more views of the army all together: 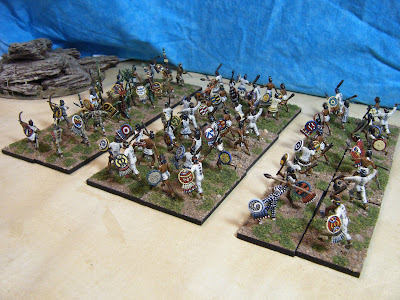 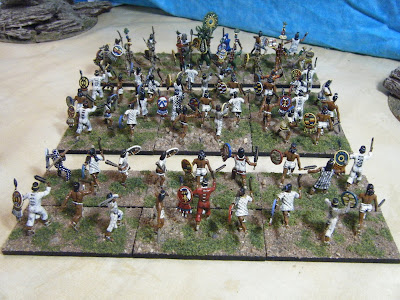 In other news, I received my first dose of the Covid vaccine this past week, so these and the other armies I have been working on over the past year might actually see action soon!
Painting-wise, I will probably take a break from 20mm for a little while, and catch up on some of my Reaper Bones, or maybe work on some terrain projects. The next planned DBA army is an expansion to the Bronze Age milieu, but I might get back to Mesoamerica eventually - I realized I might be able to scrape together enough figures for a Tlaxcalan army, with or without Spanish allies...
Posted by Norman Dean at 2:02 PM 3 comments: