Hypothetical Hordes: Shadows of the Apt

Well, the last couple of months have been a sort of betwixt-and-between period for me as far as hobbies go - with restrictions starting to loosen again I've been able to do a bit of in-person gaming, starting with a DBA marathon with my dad over Memorial Day weekend. (We put together a bracket of eight of our various Bronze Age armies and played them off against each other - the Sea Peoples won, beating out the Hittites in the finals. The Aztecs and Maya also got their first outing, with the Aztecs beating the Maya 2-0.) And the weekend before last, I got a chance to try out Stargrave, the science-fictional version of the popular Frostgrave/Ghost Archipelago system. Meanwhile, the driving urge to paint that kept me busy through lockdown seems like it is also starting to ease up. May and June mostly saw me working on some Reaper Bones figures and painting some Mongol cavalry to fill out the options for a DBA 3.0 version of that army.

However, June also saw me plow through the second half of Adrian Tchaikovsky's Shadows of the Apt, an epic ten-book fantasy series with rich, unique worldbuilding and tons of battles - perfect material for another "Hypothetical Hordes" post! 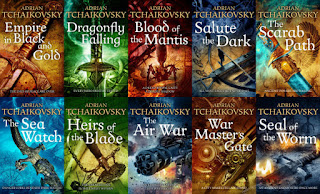 If there's one thing you should know about Adrian Tchaikovsky, it's that he loves invertebrates of all sorts. (He's probably most famous for Children of Time, which features intelligent spiders.) In the Shadows of the Apt series, there are none of the typical fantasy races like elves or dwarves - instead, the people or "kinden" take on aspects of their totemic insects or arthropods. Ant-kinden are great at working together, Beetle-kinden are slow and solid folk, Mantids live to fight, Spiders are manipulative, Flies can fly, Wasps can sting, and so forth. The other key element of the setting is the division between the "Apt", who are technological, and the "Inapt," who are magical. At the time the story opens, magic seems to be a spent force in the world, and the fortunes of the Apt are on the rise - particularly the militaristic Wasp Empire.

Our protagonists mostly come from this city of scholars and inventors. Most of the inhabitants are Apt Beetle-kinden, who threw off their Inapt Moth-kinden masters about five hundred years ago, when the powers of the Inapt began to wane. However, it's a very cosmopolitan place, and all sorts of people can be found there - not to mention our protagonists have a tendency to make friends and allies wherever they go. Between that and the ability of some Collegiates to whip up a crazy clockwork inventions pretty much on the spot, there's not much limit to what they could field. However, here are some possibilities:

Stronghold: One of the city gates of Collegium.
THE WASP EMPIRE
The main baddies of the series, like Imperial Rome with a touch of Nazi Germany, the Wasps also fall on the Apt side of the Apt/Inapt divide. Wasp-kinden can fly, and can shoot fire from their hands, but both of these abilities seem to have somewhat limited range. However, like the Romans, they tend to recruit conquered peoples into their armies as auxiliaries. The Empire also has a strong "black and gold" color scheme going on (hence the title of the first book in the series.) A Wasp army might include some of the following:
Stronghold: A regimented army camp, or evil-looking ziggurat.
ANT CITY-STATES
Ant-kinden are Apt, but with an almost telepathic "mindlink" that renders them rather xenophobic and insular. Their city-states tend to deploy a lot of heavy infantry, with their machines being fewer and generally about one step behind everyone else's. Their army should be mostly Spears or Blades, perhaps backed up by a Behemoth, Artillery, or a couple of Flyers. Giant ants (the insect type) could be deployed as Beasts, but this seems to be a tactic of last resort when an Ant city is in peril.
THE SPIDERLANDS
The Spiderlands are vast, and the Spider families tend to be more concerned with internal power struggles than outside threats, at least until the Wasps show up. Spider-kinden are Inapt, but seem to have powers of manipulation and persuasion that let them rule over a variety of other kinden both Apt and Inapt. Spider-kinden often seem to be skilled swordsmen, so actual Spider troops would probablt be Blades, but they are often quite happy to leave the fighting to their satraps or mercenaries. These could include almost any type of infantry, and mercenary aviators from the Exalsee could be deployed as Flyers.
THE MANTIS CLANS
In the Old Days, the Moth-kinden were mighty magicians and the Mantis-kinden were the backbone of their temporal power. These days, the remaining Moths mostly keep to themselves in dark and secret strongholds up in the mountains, while the Mantids keep on doing what they've always done - fighting. (Not winning, necessarily, but fighting oh yes.) Peerless duelists and fighters one-on-one, the Mantids tend to be outnumbered and outgunned whenever it comes to pitched battle. Sometimes they still manage to carry the day. A Mantid army might include the following:
Stronghold: A village well-hidden among trees, with an unsettling wooden mantis idol in the center.
THE DRAGONFLY COMMONWEAL
When the series begins, the Wasps are just concluding the Twelve-Year War with the Dragonfly realm, in which Dragonfly chivalry and daring came off second-best against Wasp ruthlessness and technology.
Stronghold: A large and airy but impractical castle.
I'll stop there, I think - there are a few other potential factions I can think of, but perhaps they should be left as a surprise for the reader. The series reminds me of Edgar Rice Burroughs' Barsoom books in how frequently new kinden turn up - you never know when you might run across a strange lost city, and in some places magic is not quite so easy to dismiss...
Posted by Norman Dean at 3:58 PM No comments: