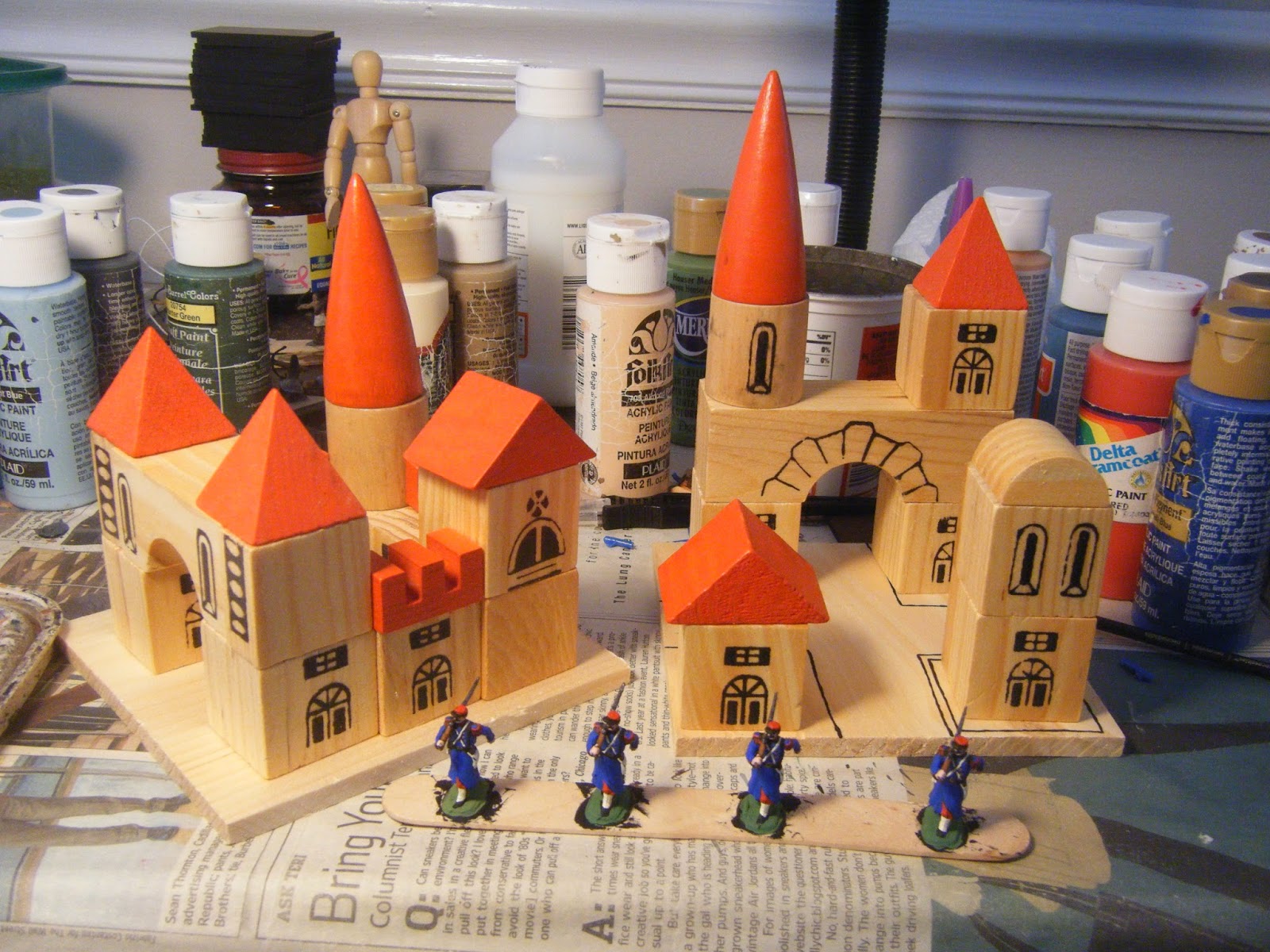 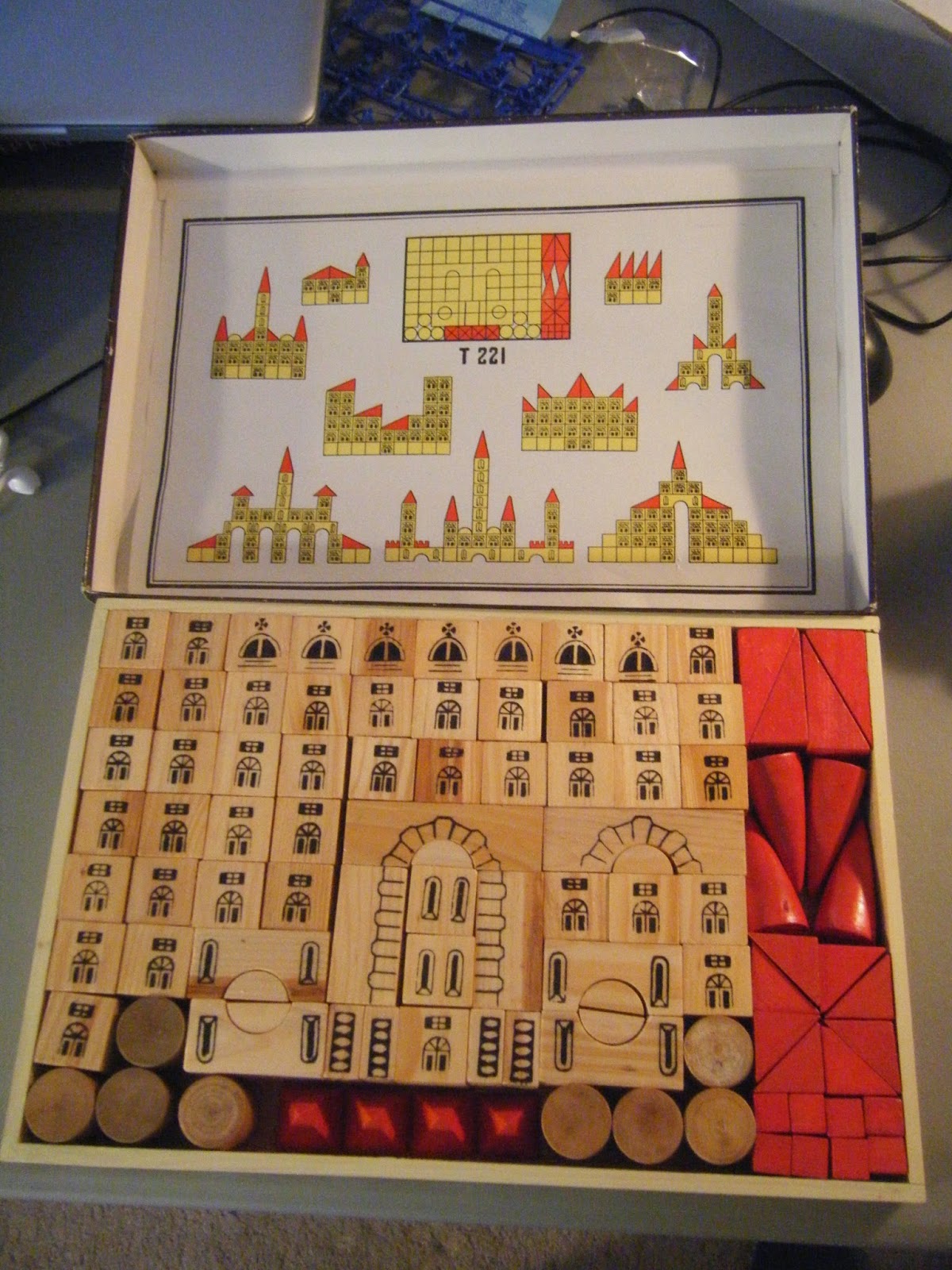 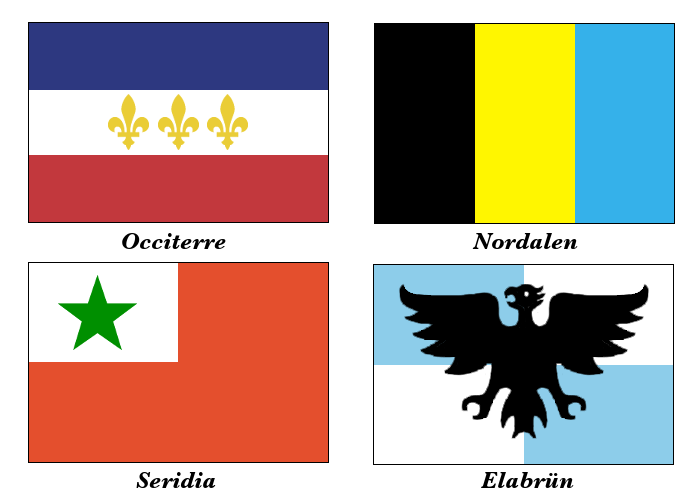 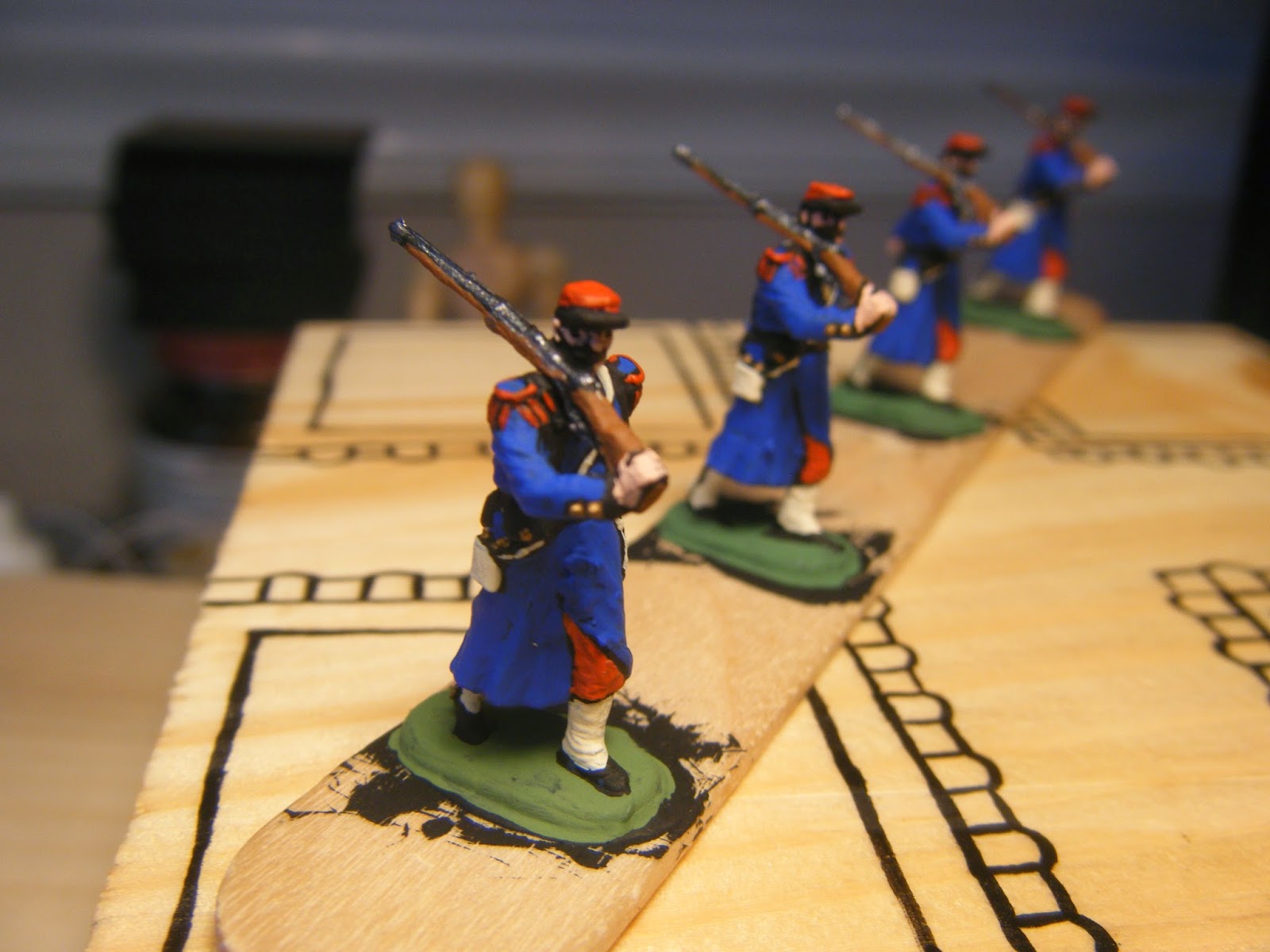 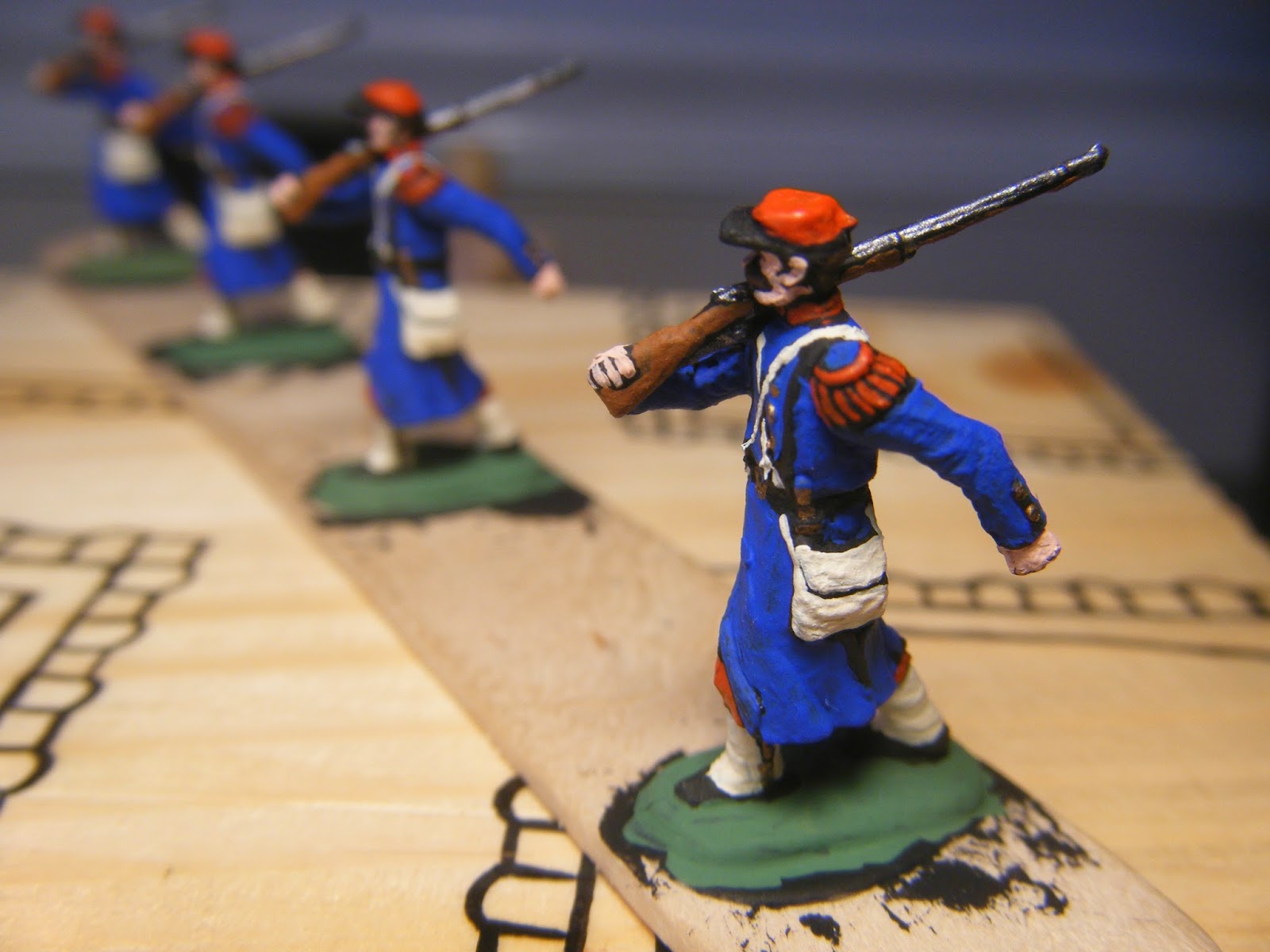 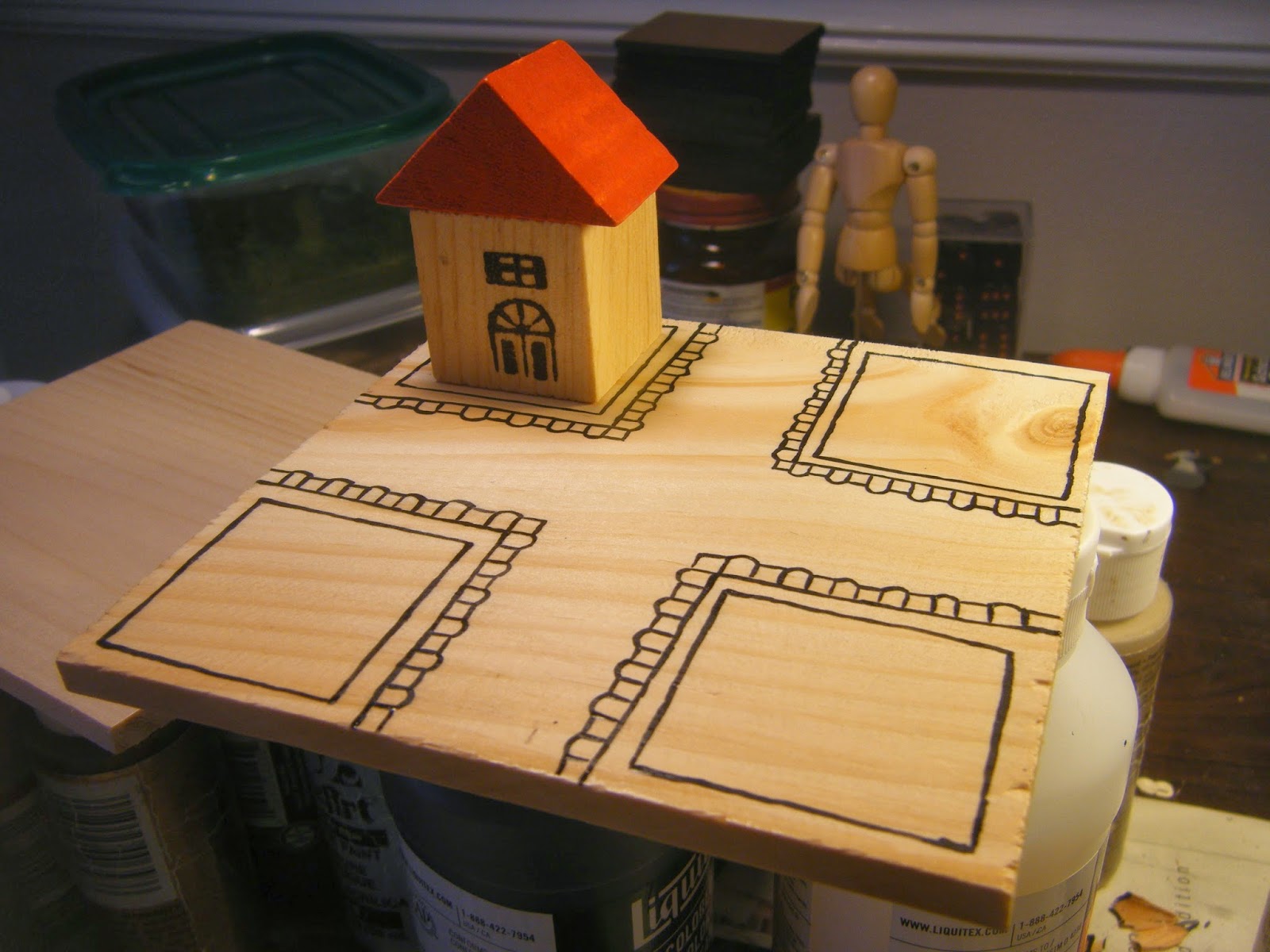 Anyway, I'm looking forward to this--hopefully I'll be able to squeeze in some time to work on it over the next few months. I still owe a post to the few units I finished before Cold Wars, so look for that sometime in the next few weeks, along with more from Occiterre and Elabrün...
Posted by Norman Dean at 7:26 PM 8 comments:

It's been a busy few months for things not gaming-related, but I am still alive. (And in fact, I have managed to get a certain amount of painting done--I hope to get a post on that done sometime before the end of the month...)

Anyway, Cold Wars report time! On account of my brother's class schedule, he and I did not make it up to the convention until Saturday morning, by which time it appears that the parking situation is pretty dire. We do find a spot eventually, and head over to registration, where I am thankful that I have a game to run, as the line for gamemasters is basically nonexistent, whereas the line for general admission is a figurative mile long.

My game is not until 2:00, so I have a couple of hours to spare--not enough time to play much of anything, but plenty of time for Dad and I to look through the flea market and dealer's area. The only thing that grabs my attention is a set of something called "CastleBlocks," pretty much like the one shown here. Dad notices it as well, and after a little discussion we decide that we can probably find something to do with it, especially for just $10. (More on my plans for this later.)

Over in dealer's hall, I pick up a box of Orion Cossacks, as I'd been thinking of restarting my "With Fire and Sword" project. Unfortunately, when I open them up later, I find that there has apparently been an error--despite the box art, it actually contains Orion Basmachi, and a number of the horse legs are broken. Fortunately, I was able to get back down to the dealer's hall and get a refund before it closed for the day. So it appears the Cossacks will have to wait for another day.

Anyway, I head back up to our club's room and set up my game--a Bronze Age battle, using my N.U.R.D. rules, basically a repeat of the one I ran at Historicon. A few people wander by and comment on the figures, which generally make a pretty favorable impression. I'm still not sure why I don't see more 20mm plastic stuff being played at conventions. By 2:00 I have my six players all lined up, and we get started.

Everyone seems to catch on to the rules pretty quickly, and by the time the game ends the players seem to be handling most of it themselves, which I usually take to be a good sign. Now that I've run this a few times, I'm starting to contemplate a minor overhaul of the rules, but that's a topic for another time.

As far as the battle itself, it ends up being a very tight Egyptian victory. The Hittite allied light chariots over on their right started by charging straight at the Sea Peoples mercenaries on the Egyptian left, who I think may have been a tougher target than they expected. The maryannu chariots did a fair amount of damage, especially to some of the lighter units on that side, but were unable to crack the elite Sea Peoples. (Presaging the historical end of the Bronze Age, perhaps...)

In the center, the Hittites fared somewhat better--the Hittite commander there managed to keep periodically pulling back and rallying his units, which left him with a fairly intact force by the late game, and probably helped him grind down the Egyptian chariots opposing him.

The Egyptian chariots fared much better on their right against the Hittite left--the Egyptian commander there kept his chariots together and used them to punch through several units of Hittite foot, while his own infantry did a somewhat better job of keeping the Hittite chariots tied up. 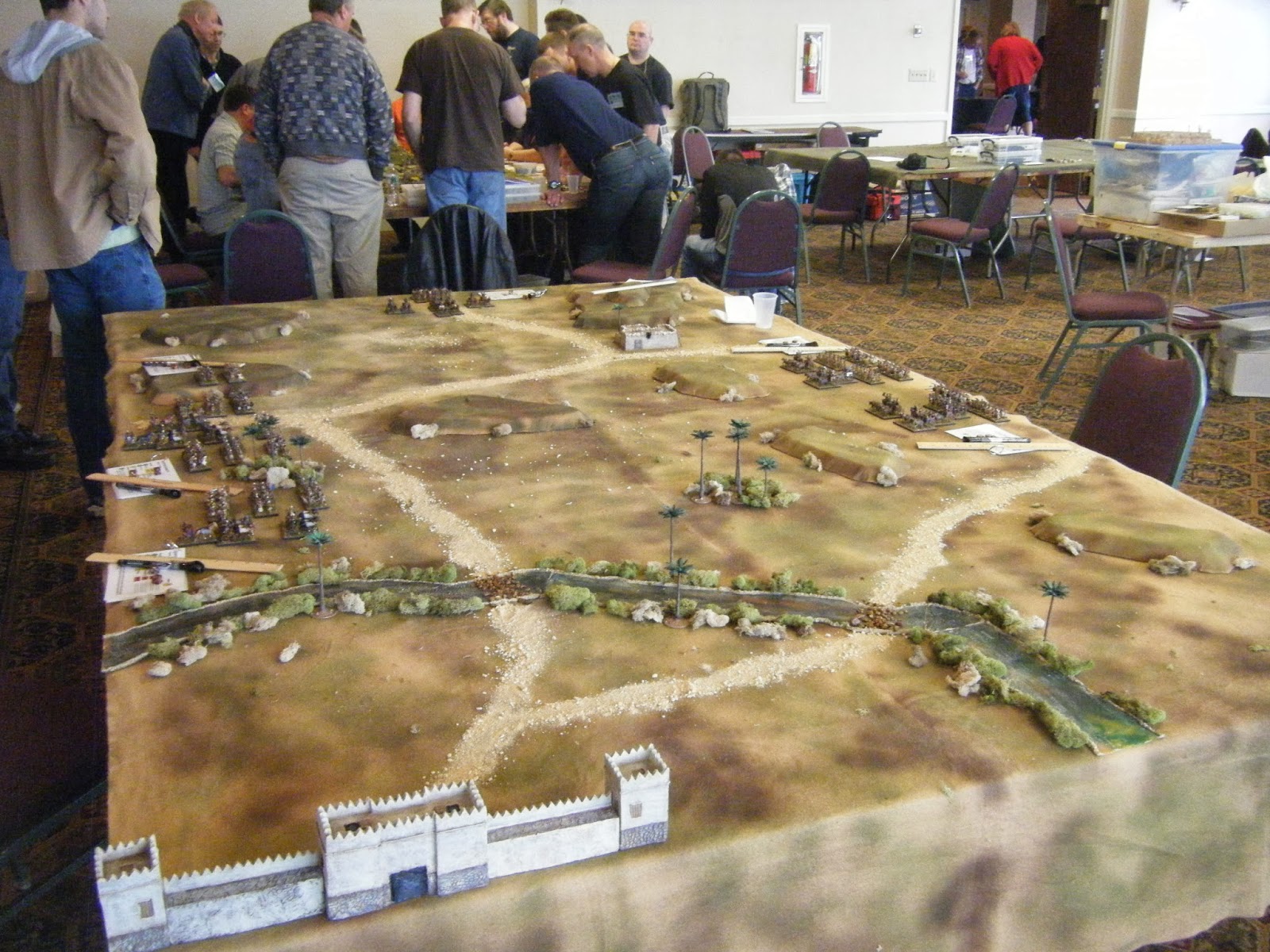 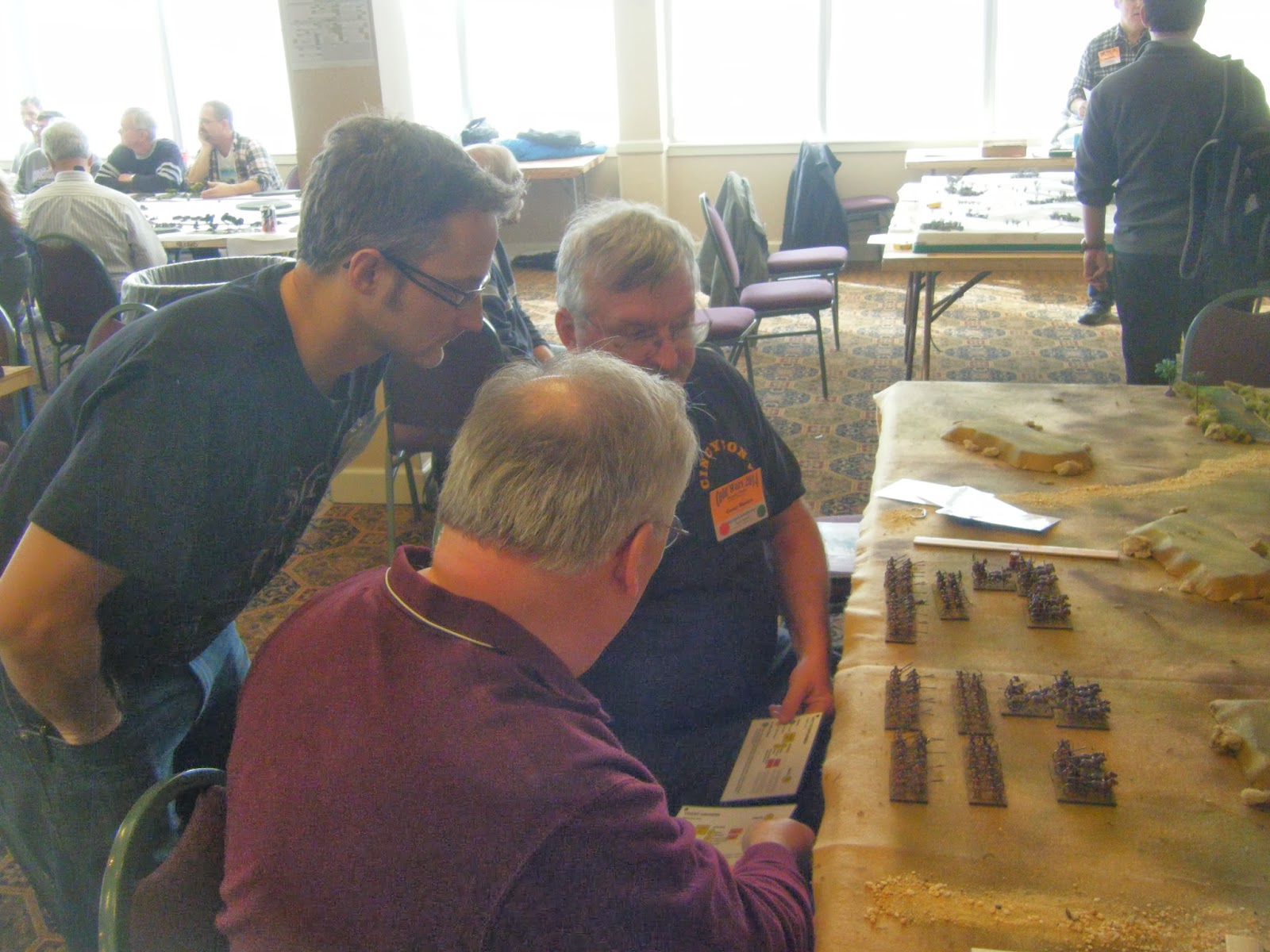 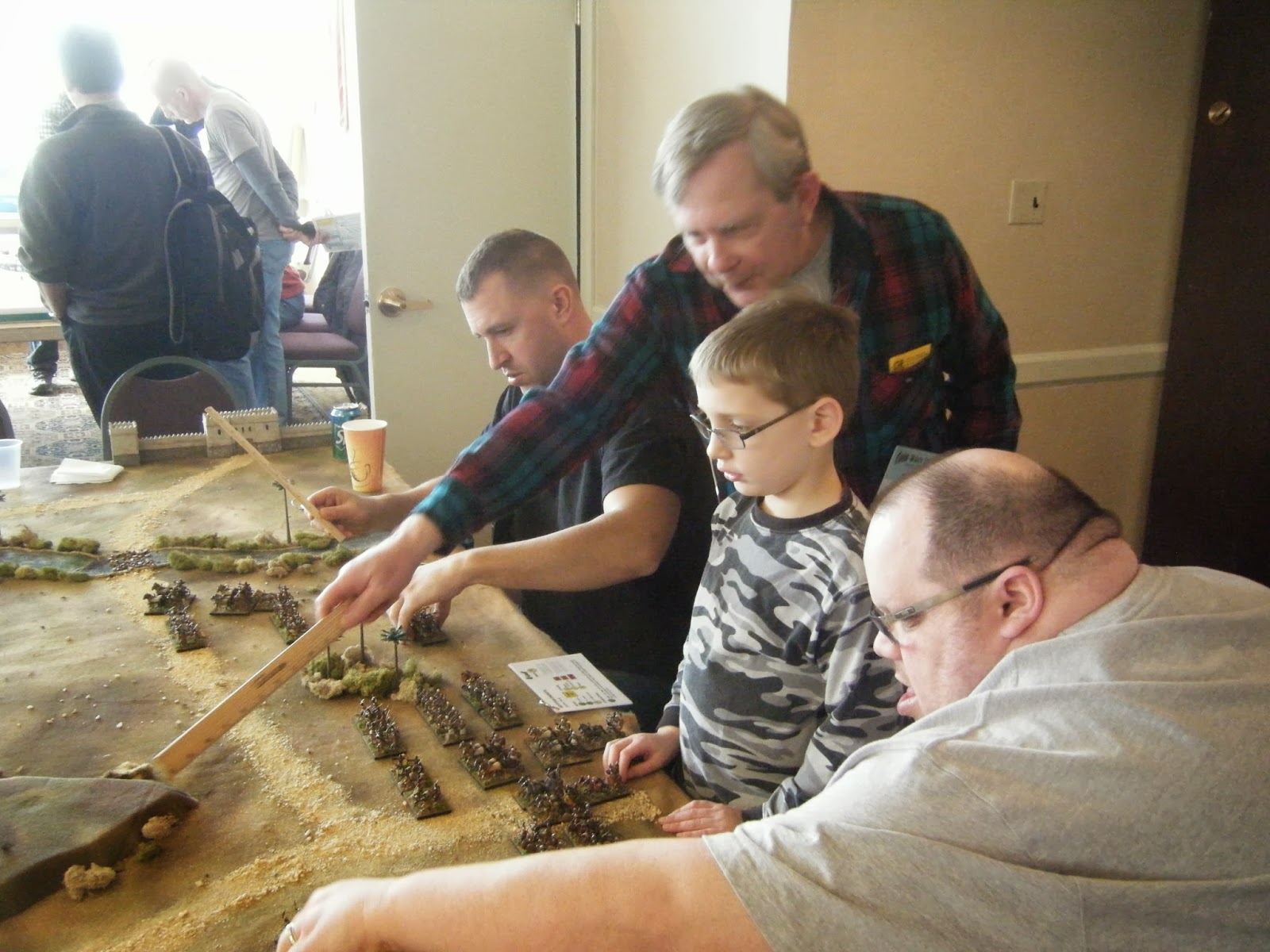 The young Pharaoh is advised by his commanders. 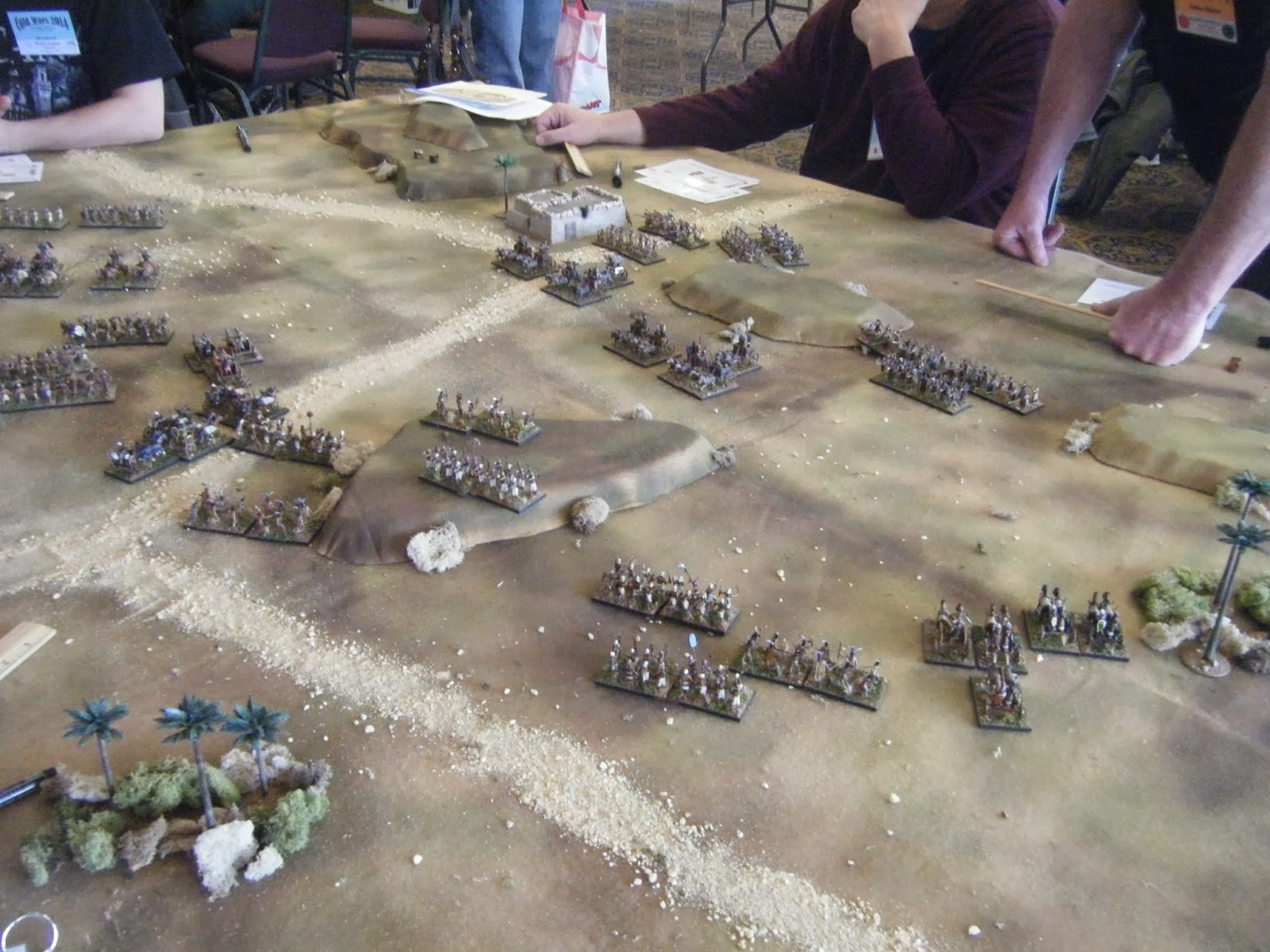 View from the Egyptian side. 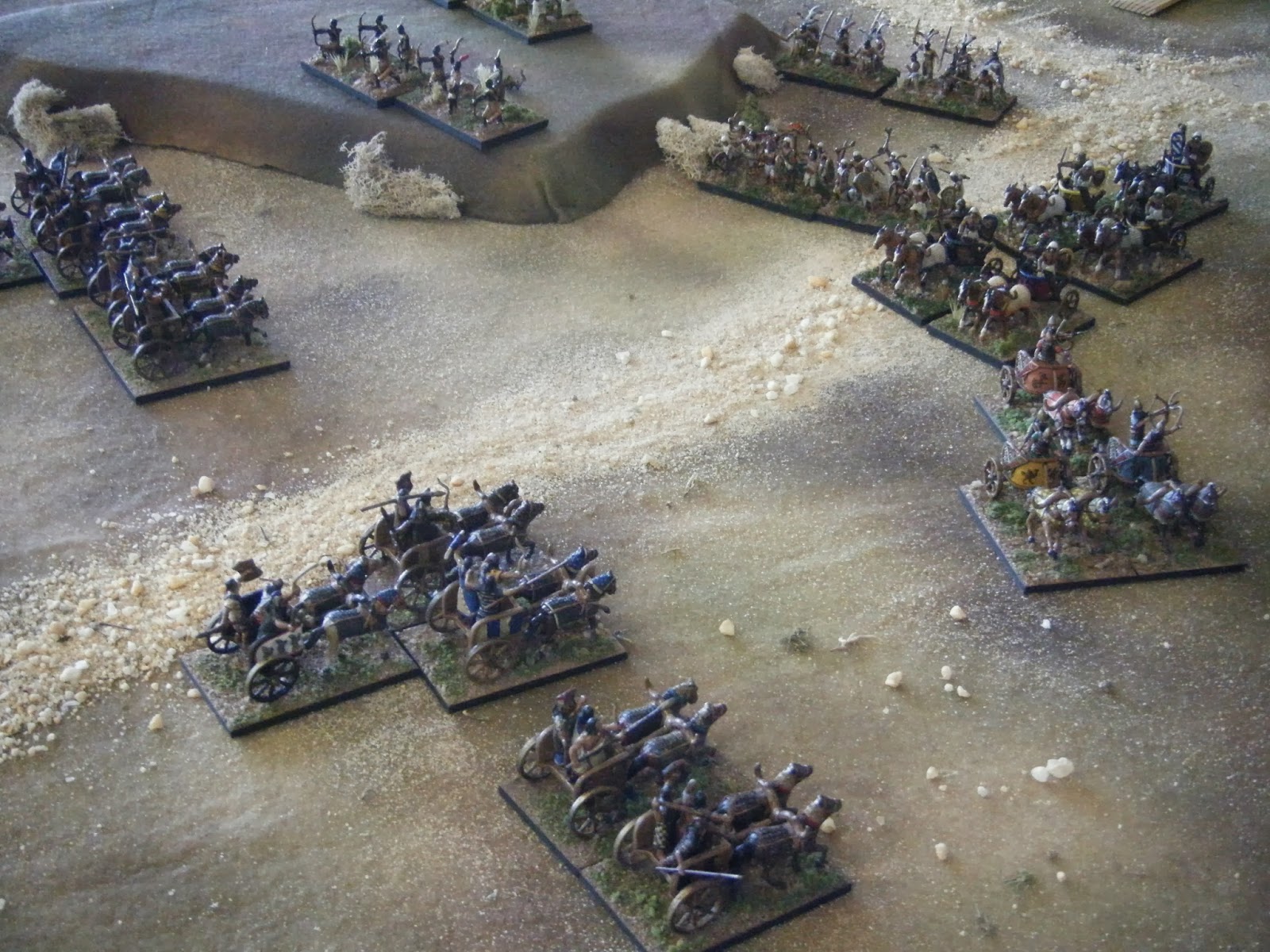 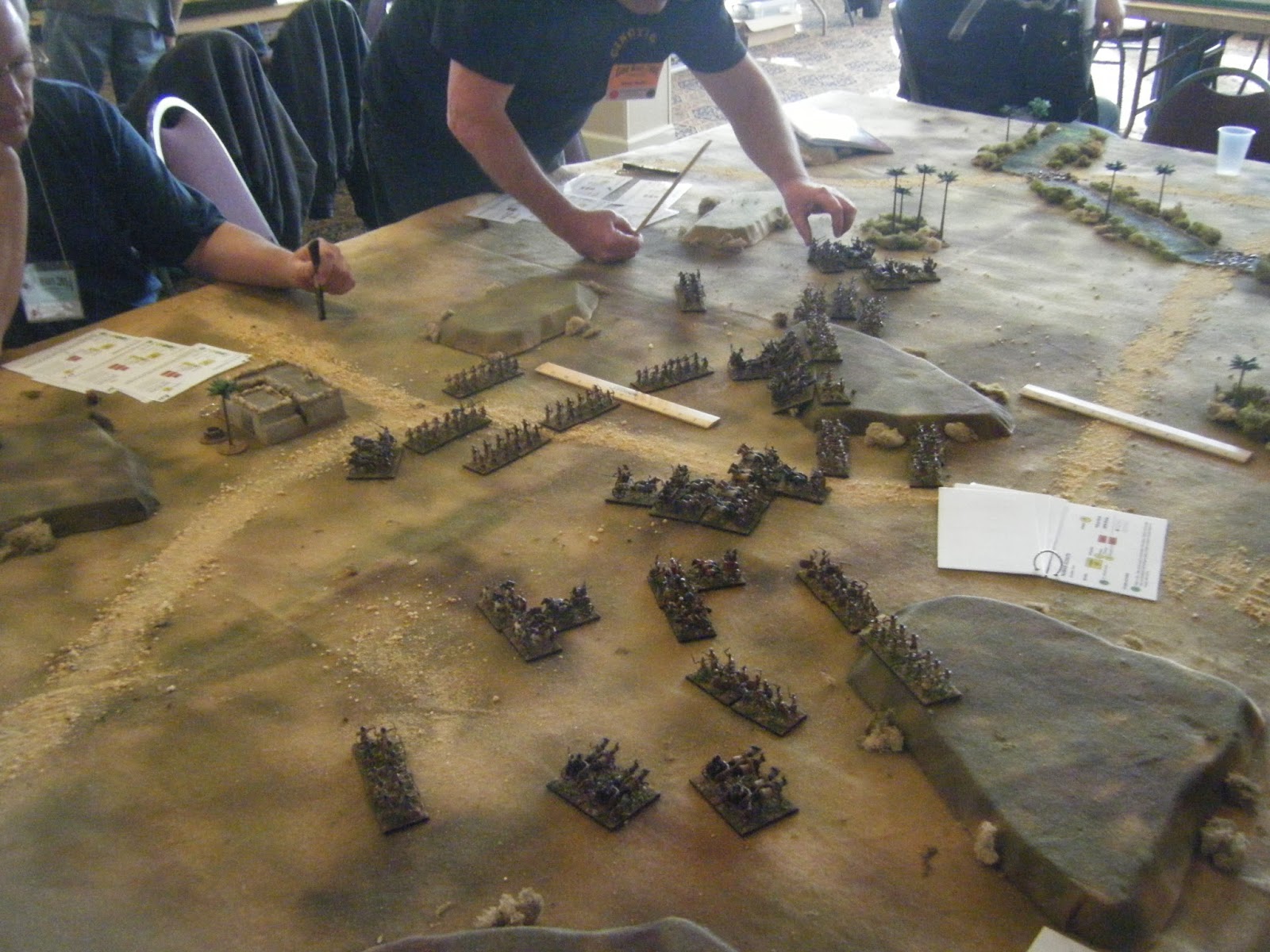 View from the Hittite right.

After putting everything away, I had some time to stroll around and watch other games, and to find some dinner. (This was also about when I discovered the issue with the not-Cossacks.) William and I had signed up for a naval game in the evening, so we headed over there. We found the table all set up, but the allotted time came and went and there was no sign of the gamemaster or any other players. At last we decided to go see if any of the H.A.W.Ks needed spare players, and so it was that we found ourselves in the seedy 25th-century space bar aboard the Space Station Accipitor, the site of many a dastardly plot against Buck Rogers and innocent bystanders.

As the villainous Killer Kane, I had demanded a ransom for the release of Buck's lady-friend Wilma Deering--except that Wilma had actually been kidnapped by my somewhat unstable compatriot Princess Ardalla. (Who had plans for winning Buck Rogers' heart by bisecting the helpless Wilma with a ray-saw.) Anyway, for once everything went off without a hitch--the gullible good guys came right up and handed me the ransom money, then dashed off to rescue Wilma while I slipped away up the elevator. Even my Tigerman minions managed to escape unscathed--a vanishingly rare occurrence  in a game of Blood & Swash. 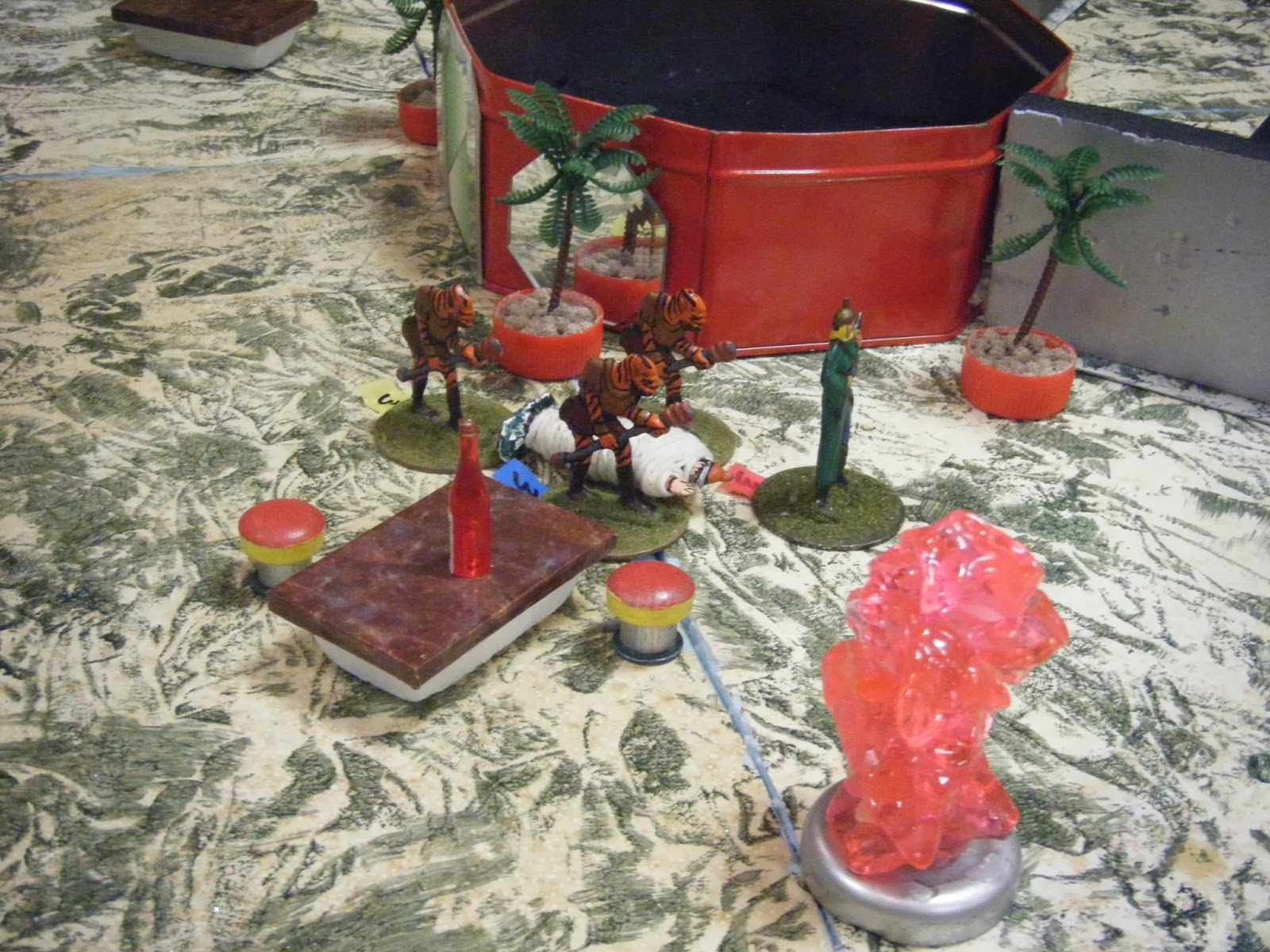 Princess Ardalla and her trussed-up captive. 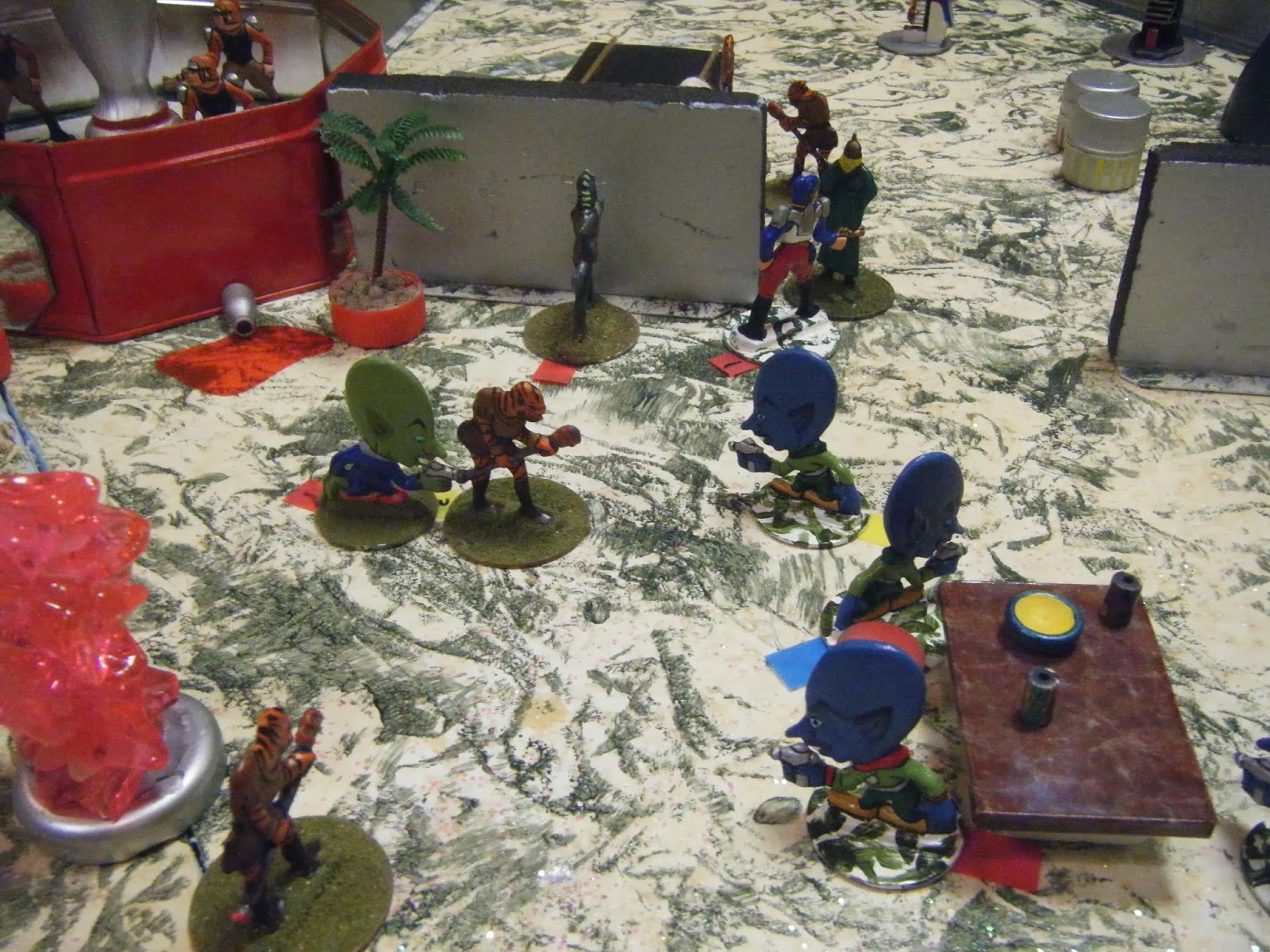 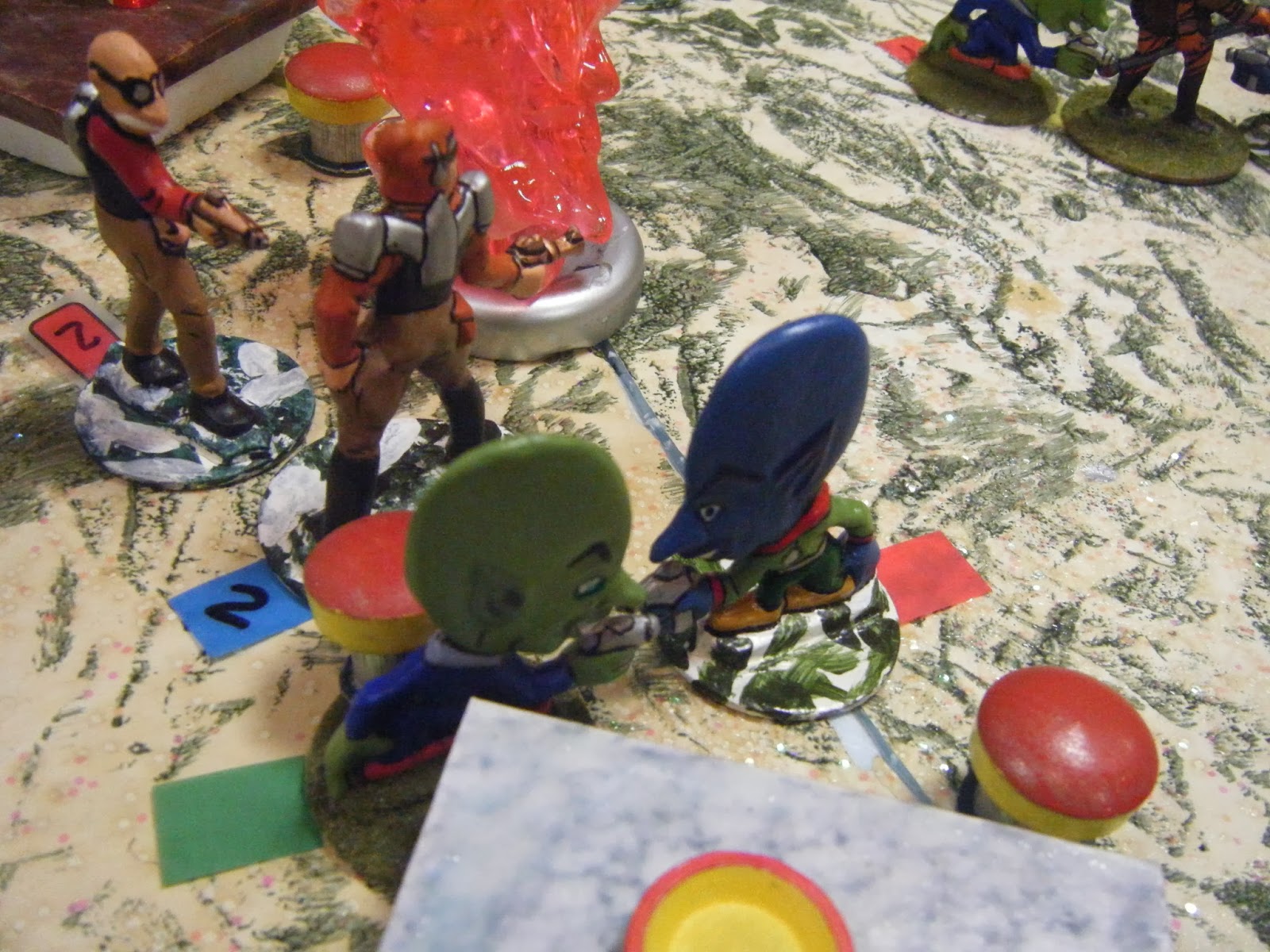 Blue and Green Tieko-men don't much care for each other... 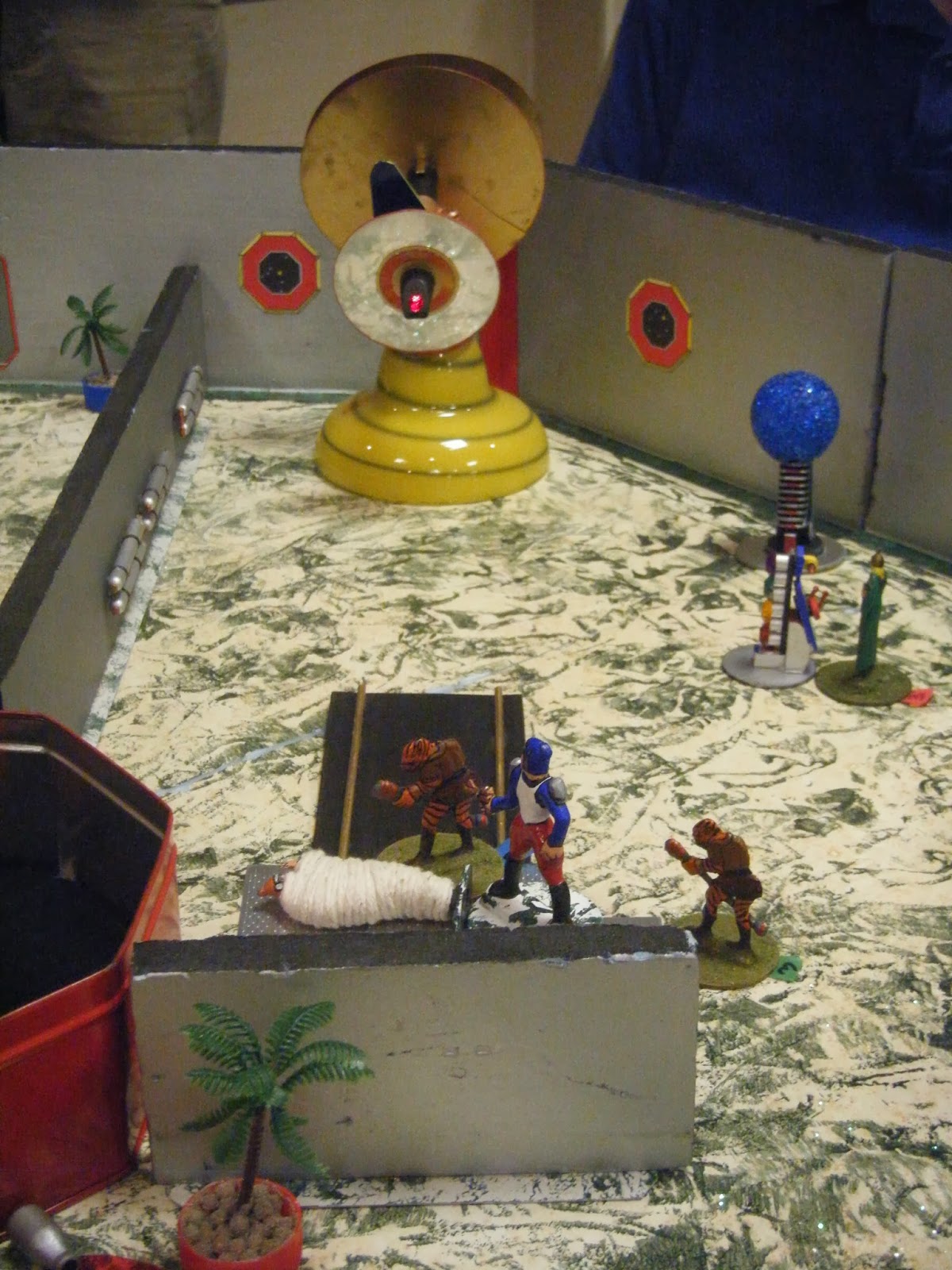 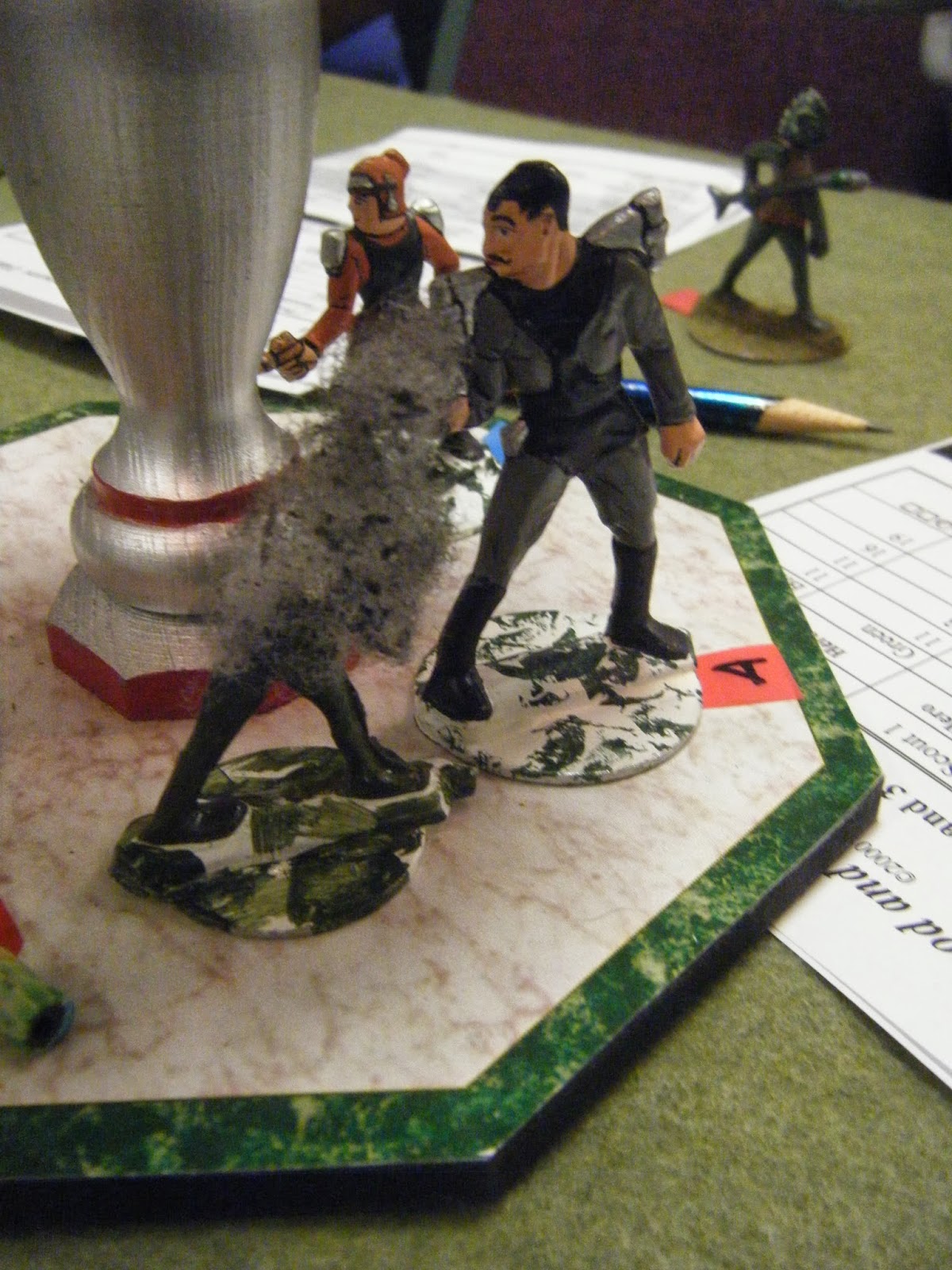 A Depth-man who tries to stop me gets zapped into smoky fish-sticks.

All in all, a fun convention, and I'm looking forward to doing more miniatures stuff in the near future. Hopefully I'll be posting again soon with a painting rounds up and my plans for those "CastleBlocks"...
Posted by Norman Dean at 9:40 PM No comments: