Jazzing up the Mongols

So I've mentioned before that my current Mongols are somewhat sub-par by my current standards, and I've been slowing hatching a plan to give them an upgrade. Phase one and phase two of this plan are now complete.

Phase one involved the development I hinted at in the tail end of my last post: giant yaks! Opinion is somewhat divided on whether to refer to the beasts as yakatheriums or as "omais" (as in, lions, tigers, bears, omais. (Sorry.)) In any case, these are now finished and mounted on the new properly behemoth-sized bases. 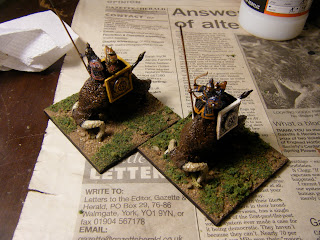 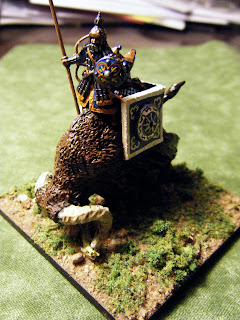 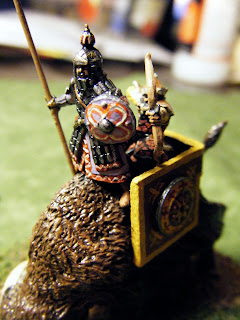 The yakatheriums were originally Mage Knight figures, while the two crewmen came from the first set of Zvezda Mongols. (I'm not sure why they were included--the Mongols were not exactly famous for their infantry... but I finally found a use for a couple of them.)

Phase two involved the box of nice Italeri Mongol Cavalry I picked up at Fall In! last weekend. I took three of the more interesting fellows and grouped them together as a Hero stand--though potentially they could serve as a Rider General or something as well. 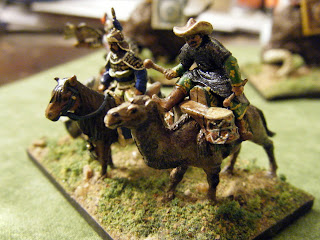 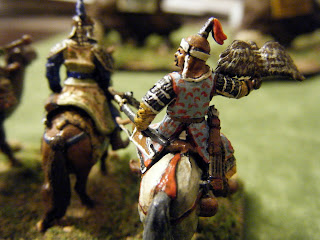 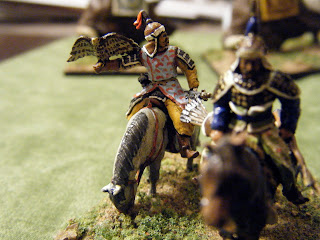 I had a ton of fun painting these guys, especially the fellow with the hawk. I generally don't like painting horses--I tend to just repeat the same four or five horse colors over and over again--but this time I put a little research into it (and the Bactrian camel as well.) The one downside is that now I need to find something to do with the spare sprues--the horses I can use with other guys (probably as part of Phase Four: upgrading the light cavalry) but I probably only need one falconer. Maybe he can be given a lance, instead...

I'm actually not sure when I'll get around to Phase Three--a Knight General stand. We've been having workpeople in for the last week or so, and between the noise and the dust and the overall disruption, my painting has been somewhat hampered.

There's also the fact that November is National Novel Writing Month (NaNoWriMo), and both my brother and I have decided to attempt to goal of a 50,000 word novel by the end of the month. Perhaps I'll post an excerpt or two from mine when it's a little bit further along...
Posted by Norman Dean at 9:02 PM