For the past couple of years, our miniatures club, the HAWKs, has been putting on kids' games at Historicon, with a giveaway of complete "game sets"--figures, terrain, rules--to the players afterwards. The figures are mostly donations, and the club paints them up before handing them out. Today we held a joint painting session/gaming day up at Chris Palmer's house, with the game being an NQSYW scenario, as a couple of people had added new units since the last game back in November. We painted all morning, took a short break for lunch, then set up the game.

Here's a few shots of the painting work in progress: 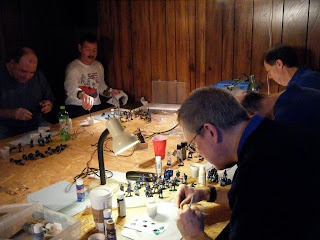 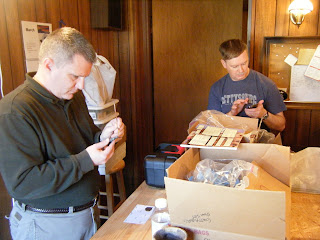 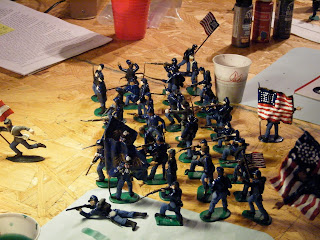 The NQSYW scenario involved a larger Northern Alliance force trying to seize a defended ridgeline before Pragmatic Coalition reinforcements arrived from off-table. It was a tight game, but in the end, the Northern Alliance was unable to establish clear control of the ridge. 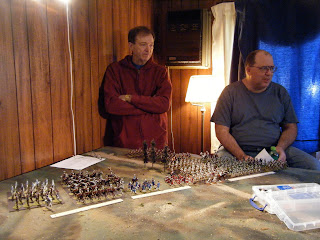 The Northern Alliance deployment--Stanzbach-Anwatsch cavalry on the right flank, S-A infantry in the center, and the North Polenburgers with their light troops on the left. 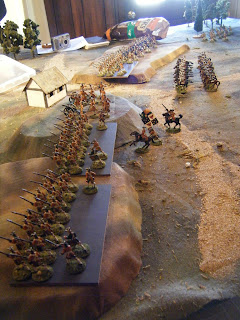 The Wachovian infantry and Schoeffen-Buschhagen grenadiers along the ridge, with a couple of cavalry squadrons in reserve.

The game nearly ended within the first couple of turns, as I allowed the Stanzbach-Anwatsch cavalry to get around my left flank even as some solid shooting from the Northern artillery caused some damage to the center of our line. Fortunately, the first of our reinforcements were prompt in arriving, as a squadron of Schoeffen-Buschhagen dragoons appeared on the table just in time to intercept the brand-new S-A lancers. Down on the other side of the board, the S-B grenadiers struck fear into the hearts of the North Polenburg regiment (or perhaps the N-P's notoriously low-grade powder was to blame for the quality of their shooting) while both sides' skirmishers squared off. 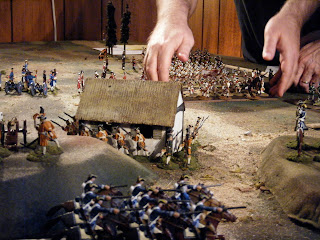 The cavalry in the foreground were the reinforcements mentioned. 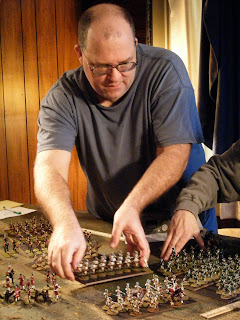 The next turn or so saw a number of additional reinforcements arrive as melees developed all along the line. A fresh regiment of S-B infantry was sent in to support the grenadiers, while some newly arrived S-B hussars managed to catch the S-A lancers as they were rallying. The Wachovian infantry on the hill, surrounded on three sides, nonetheless managed to put up a stiff resistance against the waves of S-A dragoons before being overwhelmed. Unfortunately, a careless mistake on my part allowed a North Polenburg cavalry squadron to break through and overrun our artillery battery, which I had situated in the center of our line. Further to the right, my cuirassiers (under the leadership of my co-commander) saw their first action against the veteran Stanzbach-Anwatsch infantry. 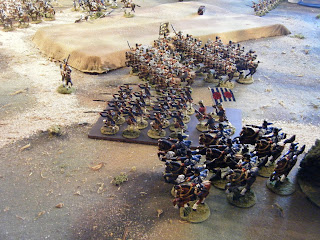 More of our reinforcements. 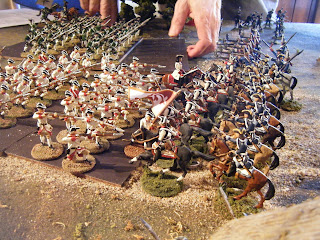 Hoping to catch the cavalry who had overrun the guns, I sent my hussars up the hill--but found instead the gray-coated Stanzbach-Anwatsch dragoons. Trusting in Wachovian steel and our superior numbers to carry the day against our heavier opponents, I hurled my hussars into their flank, beginning a swirling cavalry melee that would last several turns and leave that fatal ridge strewn with the bodies of men and horses. 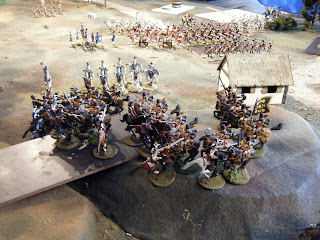 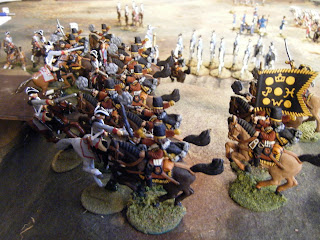 A closer view of the combat. 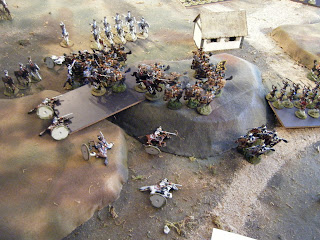 The results of the first round--seven to two in favor of the hussars.

No sooner had the gray-coated horsemen been sent fleeing in disarray then the sound of bugles was once again heard above the din of battle--the veteran 32nd North Polenburg Dragoon Guard was being sent against us, along with more S-A dragoons, their sabers still red with the blood of the Wachovian infantry. With no time to rally or catch a breath, the Wachovian hussars once again spurred into action, this time doubly disadvantaged against heavier opponents on fresher horses. Meanwhile, the S-B cavalry took advantage of the chance to attack still another squadron of the S-A regiment. In two turns of melee, the hussars managed to achieve a draw, while the combined weight of casualties from both combats finally drove the Stanzbach cavalry from the field. 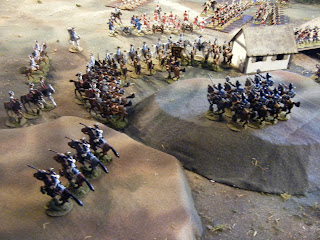 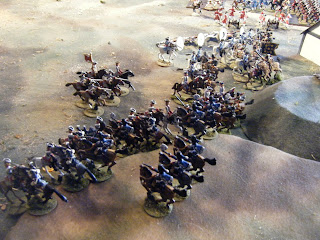 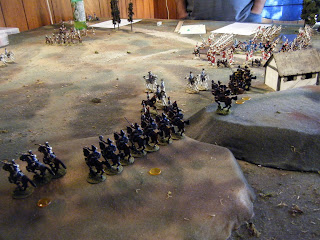 The final results of the cavalry melee.

Meanwhile, further down the line, the lead S-A infantry regiment had fallen behind to rally after their melee with the cavalry, and the North Polenburg infantry had broken after coming up against the S-B von Nordhafen regiment. This left the veteran von Nordhafens facing the second regiment of S-A infantry--untested troops. 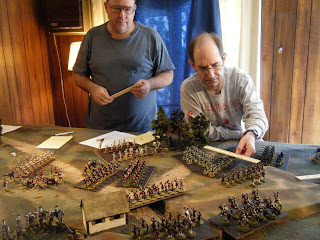 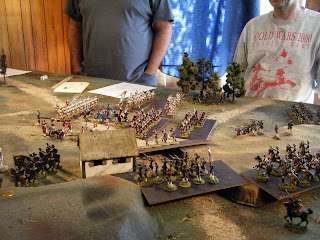 The North Polenburgers have fled the field.

The new Stanzbach-Anwatsch infantry made a good showing, as they and the von Nordhafens annihilated each other. Meanwhile, the last of our reinforcements--a new pair of guns--had finally arrived, and with effective Northern forces reduced to a trio of guns and an infantry regiment halfway to breaking, it was decided that the Northern alliance would not be able to hold the ridge even if they had driven us from it. So ended another NQSYW battle, with a costly victory for the Pragmatic Coalition, and first-battle honors for several new units.
Posted by Norman Dean at 8:16 PM