As mentioned in my previous post, I've been working on some DBA-compliant armies for the late Bronze Age, one of my favorite historical periods. Last month it was the Egyptians; this month I've been working on a mutual opponent for them and the Hittites: "I/20b Syro-Canaanites." This list lumps together pretty much everyone who was living in present-day Syria, Lebanon, and Israel - light chariots backed up by kind of mediocre infantry. Honestly, they are probably the least exciting of the four armies I have planned, but a necessary piece of the historical puzzle.

Like the Hittites, I had some of these painted already; in fact, the chariots are ones I have had for years, rebased onto 60x80mm bases. Readers with sharp eyes may recognize them from previous battle reports. However, I added some chariot runners (converted from trusty old Airfix Robin Hood figures) to help fill out the bases. The shields on these guys were probably the most fun part of this army - the multicolored checker patterns are based on some depictions from a chest found among King Tut's grave goods (where naturally they are shown being trampled under his chariot). 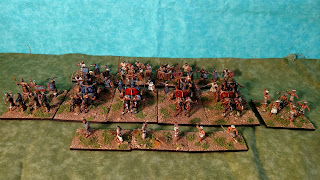 The army arrayed for battle

From the commander's perspective 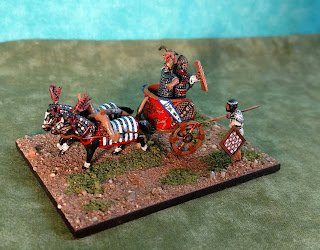 The general in his light chariot 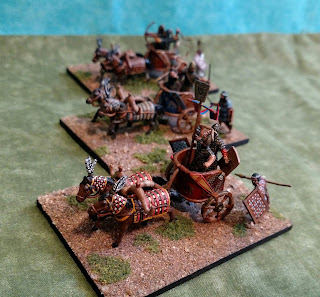 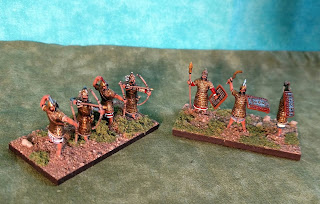 The "royal guard" - DBA gives the option of a "fast" Blade (3Bd) or "solid" Bow (4Bw) unit - I did both with spares from the Mariyannu chariots. 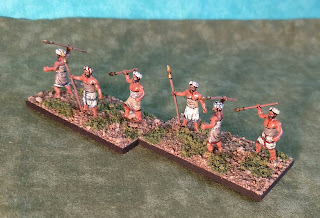 Some light infantry (3Ax) - these guys are from Caesar's Early Arabs/Bedouin set.

More infantry - DBA gives the option of deploying these as 3Ax or a massed Horde (7Hd). The hordes I had already; the light infantry are new. These are mostly more Airfix Robin Hood conversions, though a couple of Caesar Hebrews were also enlisted. 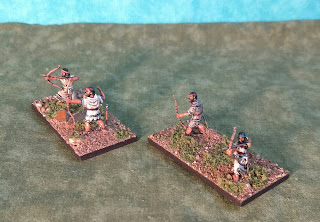 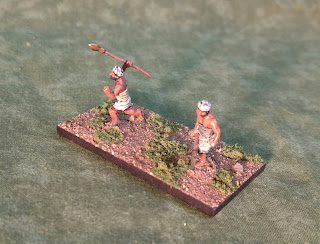 And skirmishers with javelins (Ps)

The current scope of this project calls for one more army - the Sea Peoples (I/28). I have the figures for them all set aside now, but I may take a break from the Bronze Age for a little while to clear some other items from my painting queue.
Posted by Norman Dean at 8:29 AM