When I was a kid, I went through a phase of being very interested in the Aztecs - probably sparked by reading Captain Cortes Conquers Mexico, from the World Landmark book series. (I'd credit these books for a good chunk of my interest in history; linking titles to specific gaming projects they've inspired could probably be a topic for another post...) As part of this, I ended up with a whole host of the Revell Aztecs and Conquistadors, some of which I even painted up and played games with. Some of the unpainted ones have hung around ever since, with the notion that maybe I'd have another go at them some day.
Well, that day hasn't arrived yet, but it may be coming!
At the beginning of last year, when I started looking through the DBA army lists and considering what armies I could build, the Aztecs came up as one possibility. But I knew I'd want some historical opponents for them, and the options in 20mm plastic are somewhat limited. However, DBA does list one of the later Maya armies as an Aztec opponent, and Caesar Miniatures put out a nice-looking set of Maya a few years ago, so I decided to order a box of them, just on speculation... and then I decided that I'd also like a set of the newer Caesar Aztecs to supplement my older Revell figures. But since that second order took a while to arrive, I figured I might as well start painting some of the Maya while I waited.
So that's how I ended up with a DBA Maya army but still no Aztecs! And here they are: 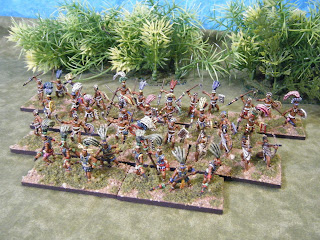 This are intended as the Maya III/22c list, nominally for 1283-1461 AD, the late Postclassic era. However, when I went to do a bit of research, I discovered a couple of things:
So despite my efforts, these guys may be a little historically suspect as opponents for the eventual Aztecs. But hopefully they will stand on their own merits. 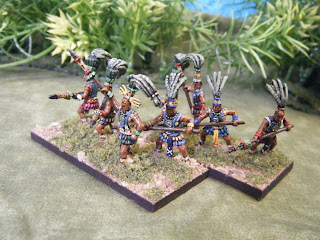 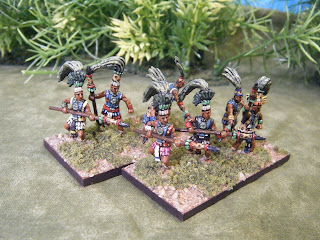 The list includes two units of "noble warriors" including the general, classified as solid Blades. For these I ended up using the poses who were using a spear two-handed, and wearing tunics or other torso-coverings. These are almost certainly based on a picture of a ruler from the Bonampak murals, and I have a sneaking suspicion his outfit is supposed to be unique and distinctive. So this may be the equivalent of having a regiment of Napoleonic French cavalry who all resemble "Napoleon Crossing The Alps."

There are eight units of "Maya warriors", who are classified as fast Auxilia. As is often the case, I had fun with the shield designs for these, though they are mostly fanciful as I did not find much source material. 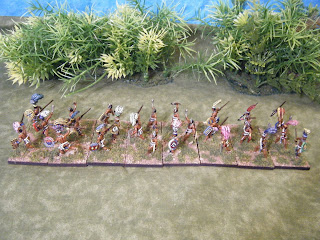 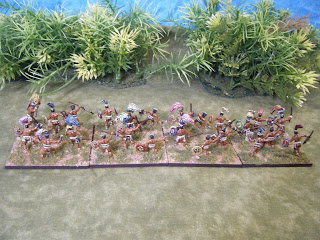 The next one was a head-scratcher: one unit of "Toltec-Chichimec mercenary archers" as solid Bow. "Chichimec" seems to have been a term applied by the Aztecs to a wide variety of peoples, but I did run across one depiction attributed to the Florentine Codex: 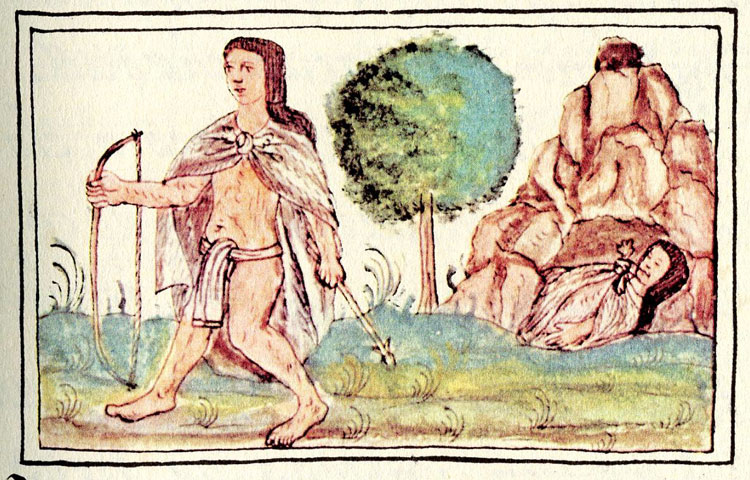 Hmm, bow-armed men dressed in long cloaks and loincloths? Where was I going to find those? The Caesar Maya set certainly did not include anyone like that... but it turns out they are a surprisingly close match for some of their Bronze Age Libyans, with a little conversion work: 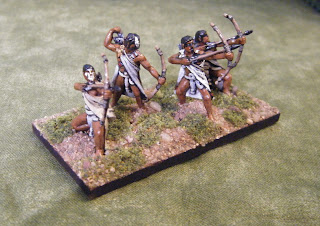 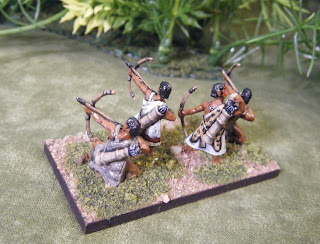 Finally, we have one unit of peasant slingers, as Psiloi. Easily done! 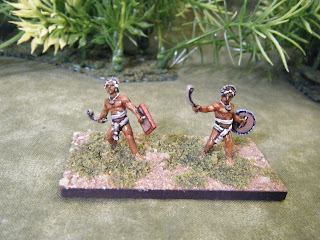 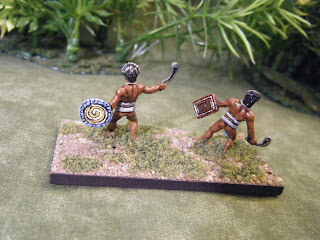 So here's the army all together again. Despite all my qualms about historicity, they were fun to paint, and they may see some future service in Hordes of the Things as well, which would make it a moot point. Next up... maybe it will finally be time to paint some of those Aztecs! 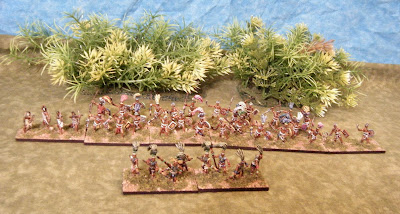