Well, after a sojourn in the Americas, it is back to familiar territory for my latest DBA army: I/26 Later Mycenaean & Trojan War! The historicity of the Trojan War has stirred a lot of debate over the years, so about all I will say is that my views have been indelibly marked by having a copy of Peter Conolly's The Legend of Odysseus floating around since childhood. (And I suspect I am not the only one.) My intention with this one was to build a single army that could match either the I/26a Achaian or I/26b Trojan lists, rather than two entire armies; for now their opponents are likely to be my Hittites and Sea Peoples. 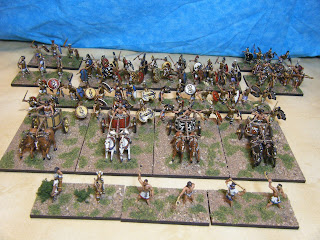 The whole army together
The figures here are all my usual 20mm plastics, mostly Caesar Miniatures' Mycenaean and Trojan army sets and their Mycenaean Chariots. I mixed and matched pretty freely between these sets; I don't see any indication that there was a lot of difference in equipment between the two sides (and anyway, the Iliad seems to suggest that arms and armor were swapped back and forth or taken as trophies on a regular basis). There are also a few head-swaps and other minor conversions in the mix. 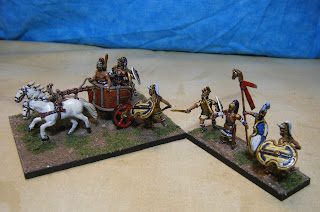 LCh or 4Bd general
First up, we have the general in his light chariot. DBA allows the charioteers to dismount and fight as solid Blades instead, so I made sure to have that option available. The banner is not especially historical, alas, but I wanted to be able to distinguish the dismounted general at a glance. (Bonus point to anyone who can figure out the source of the horse head finial!) 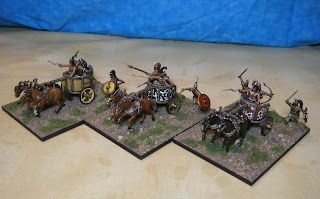 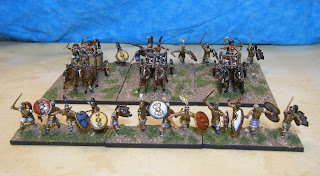 3x LCh or 4Bd
Here are the other three light chariots, along with their dismounted solid Blades counterparts. (The outer two men in each stand of Blades match the two men on foot for the corresponding chariot unit.) The keenly observant may note that I have made some substitutions in the chariot crews - the ones Caesar includes look to me to be more suited for an earlier period. Hence, no Dendra armor here. There's also some historical debate over whether Mycenaean chariotry was equipped with bows - mine are, because I had lots of spare archers, and few spare spearmen. 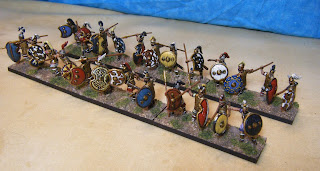 6x Sp
The core of both army lists is a block of Spears - the Achaians can have up to six, and the Trojans up to five. One minor complaint I have about the Caesar sets is that a lot of the shields have a grooved texture that I expect is supposed to represent wood - I'd have liked to have been able to paint more of them as animal hide.

2x Ps
Both armies can deploy a couple of stands of slingers as psiloi. Unfortunately, the sets only contain a single slinger pose. The second fellow from the left is actually a spare chariot driver who has had his limbs repositioned; the one to his right is a Punic War figure that I have borrowed before. 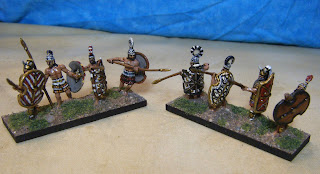 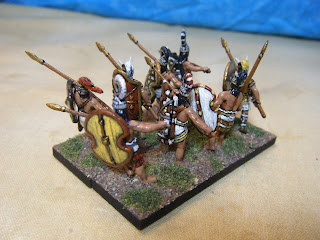 2x 4Pk (Pylians)
The Achaians are allowed to replace two of the Spears with solid Pike (representing troops equipped in an older style with long two-handed spears). I actually got pretty far with painting these before I decided that they really ought to have shields, so I had to go back in and add those. Unfortunately, neither set includes a really proper figure-of-eight shield, so I made do with what was available. 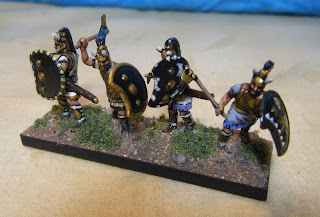 4Wb (Myrmidons)
The Achians may also replace one of their psiloi with a solid Warband unit representing Achilles' Myrmidons. I tried to distinguish these from the regular Blades or Spear by giving them a mix of hand weapons, and black shields and plumes. 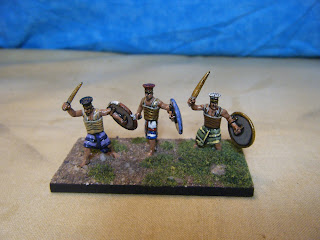 3Bd (Lukka/Lycians)
The Trojans are allowed to replace a Spear unit with a fast Blade unit representing Lukka allies or mercenaries. (The Lukka also feature prominently in the lists of the Sea Peoples, and seem to have lived a somewhat piratical lifestyle along the southwest coast of Anatolia.) The figures here are Caesar Philistines. 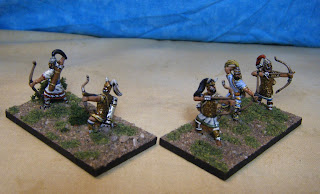 3Bw or Ps
Finally, the Trojans get a unit of bowmen, as either Psiloi or fast Bows. 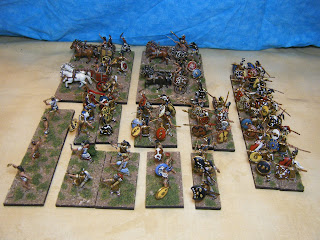 Another angle on the whole army
This is probably the largest of the DBA armies I have painted in the last couple of years, so I am ready for a break after these! I do have one more Bronze Age army in mind, but I will need to resolve some supply issues before I am ready to work on them. Fortunately, I have no lack of other miniatures to paint in the meantime - and maybe I'll even be able to get some of these guys on the table for a game!
(Also, if anyone here is not already familiar with the work of Philotep (favored of Ptah, god of artisans) by all means check out his blog! His latest post has me itching to try painting some plaid.)
Posted by Norman Dean at 2:57 PM