Battle of the Dining Room Table

After a couple of days of painting figures, I had an urge to actually play a game. Since our regular gaming table is currently piled with stuff, I coerced my brother William into helping me clear the dining room table and set up a brief skirmish.

In the orange coats, we have the Wachovians, who are in a terrible hurry to make off the opposite edge of the table. Their force consisted of the 1st Regiment of Foot, supported by the infamous Wilderer light infantry, a squadron of hussars, and a pair of guns.

Standing in the way of that goal are three companies of infantry--my brother's own Wiegenburgers in the white coats, and the nameless blue and red-coated infantry companies--supported by a squadron of dragoons and the Wiegenburg gun.

We set a limit of 10 turns for me to get as much of my force as possible off the table, beyond the line of the hills. As it turned out, this was a little pessimistic; the battle was basically wrapped up by the end of turn 6, with the Wachovians having successfully forced their way through the pass. 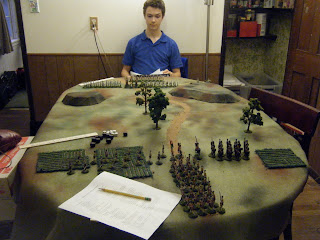 Table set-up at the beginning. Terrain was pretty minimal. Wachovian troops are entering in column along the road. 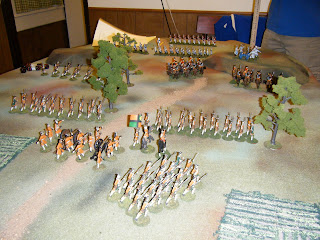 Situation a few turns later. An indecisive cavalry melee is taking place at the foot of hill. My troops have shaken out into line, for the most part. My two guns are exchanging fire with William's gun up on the hill. Unfortunately... 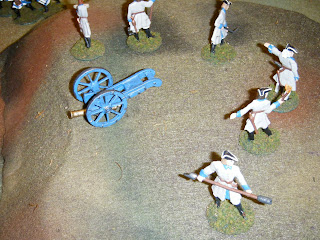 ... I knocked out his cannon almost immediately. This left him in an awkward position, with a gaping hole in his left flank. 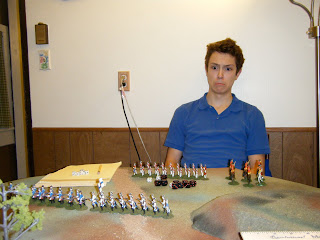 He moved his reserves up to fill the gap, where they met my two companies coming over the rise. 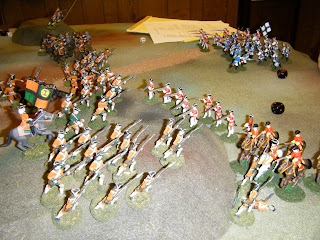 The red company put up a good fight, but his other two infantry companies had been ground down by a couple of turns of musket fire, and the victorious Wachovians swarmed through the pass.
Posted by Norman Dean at 3:07 PM