In many past years, the arrival of the renowned Ross Macfarlane at our house has marked the beginning of several days of frantic terrain building, as we scrambled to complete the scenery for a convention game. However, for once we were prepared; the fortress had been finished on schedule, so we had the chance to run a playtest game before Historicon to see how the siege rules would work before releasing them on the unsuspecting public.

As it happened, for the purposes of the playtest I was tasked with attacking the fortress, and I must admit I rather made a botch of it. I managed to lose an entire battery of siege guns to a well-timed sortie from the fortress, and it took me several weeks of in-game digging before I could position my remaining cannons to breach the walls--and after all the waiting, I threw my final assault in too soon, and was bloodily repulsed! 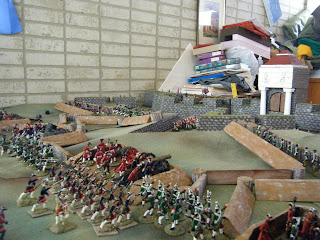 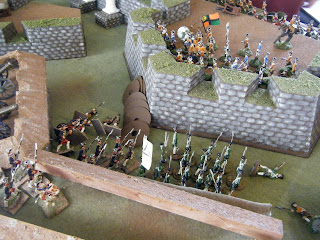 Top: My trenches approach the wall.
Bottom: Assaulting the wall. Note that my own troops (in the orange coats) are actually on the opposing side here...)

Thursday morning we packed the fortress and all of our trenches and batteries into a couple of medium-large boxes and set out for Historicon, held this year at the Valley Forge Convention Center up in Pennsylvania. We had five games to run over the course of the convention; three of them siege games. The first game, however, was a more open battle beneath the walls of the fortress, as a train of supply wagons attempted to reach the gate without being caught by the enemy. In the end, they were halfway successful--three of the wagons made it to safety, but the others were overrun by a last-minute charge from some Rosish light infantry... 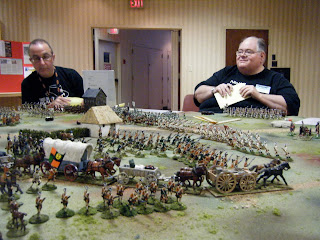 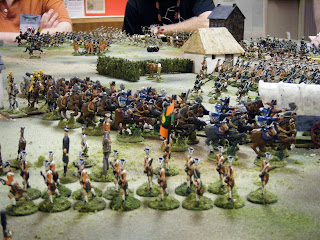 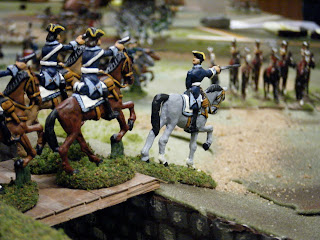 Top: Wachovian infantry fan out to protect the convoy.
Center: Hussars move forward. In the background, Wachovians trade fire with the white-coated Stanzbach-Anwatsch infantry.
Bottom: Schoeffen-Buschhagen dragoons sally forth from the ravelin.

Thursday evening I had the chance to play in a little inter-war Mexican skirmish. Unfortunately, the rules being used did not scale up well to a six-player game, although I'd be willing to give them another shot in a smaller setting. As it was, a dozen figures per player turned out to be too many when each one has to  be rolled for individually to see whether they move in a given turn, and when one unlucky roll can end your turn abruptly. After four hours, my cavalry had not made it to the center of town, and I saw no combat the entire game. 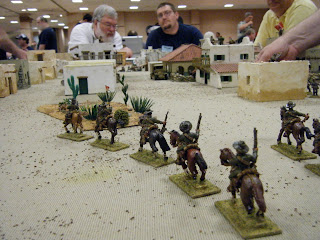 Friday morning was the first of our siege games, and I was drafted to help Dad defend the walls. Two gentlemen showed up to play the attackers, and quickly went to work digging saps and parallel, even as their guns silenced our cannons on the walls. Unfortunately, we ran short of time before they could dig breaching batteries or attack the walls, but given our lack of artillery support at that point, they could very well have succeeded. 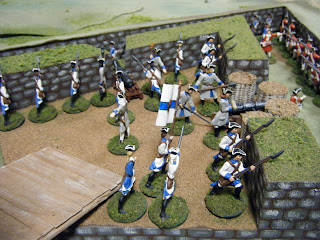 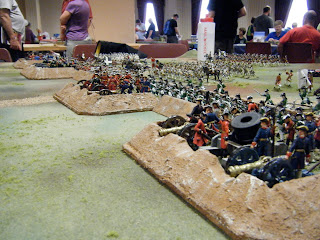 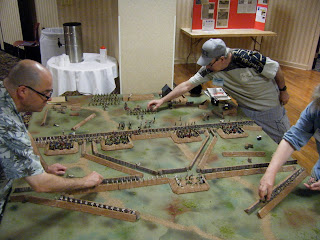 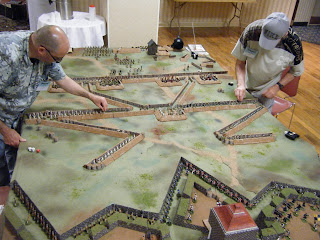 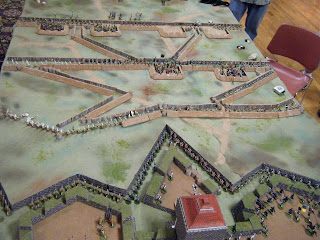 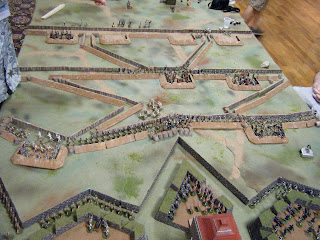 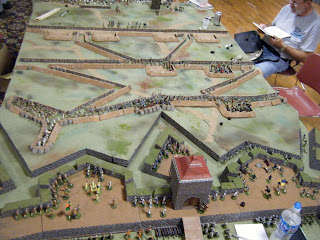 A sequence showing the progress of the besiegers' works and our own dispositions.


Friday evening, we ran the game again. This time my brother William helped me command the fort's defenders against a less lucky pair of attackers. William showed a remarkable knack for picking off the engineering officers and dismounting enemy artillery pieces. After a general sortie disrupted construction of the third parallel, the attackers sent troops into the covered way--culminating in an assault on the central ravelin, where the Wachovians narrowly beat back the Queen's Foreign Regiment of the Rosish army. 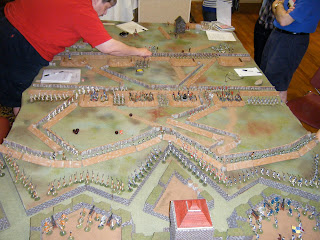 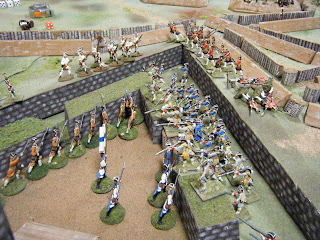 Top: Our forces emerge from the covered way to attack the troops digging the third parallel.
Bottom: Wachovians and a few surviving Wiegenburgers hold back the Rosish hordes.

If I had not been holding the fortress, I would have liked to play Matt Kirkhart's Megiddo game, featuring his stylish homemade figures. I enjoyed his earlier Greeks vs. Persians, so a chance to play my favorite period would have been doubly welcome. Alas, the voice of duty called, so I have to content myself with a few pictures: 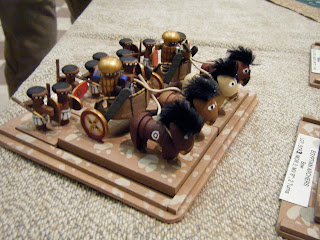 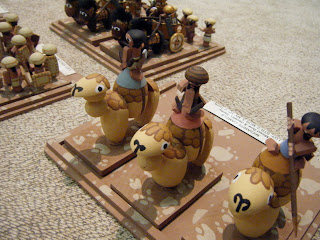 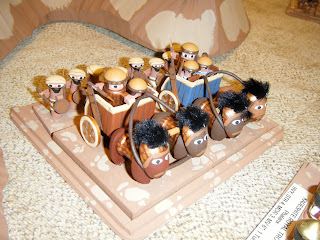 Saturday morning I was compelled to hold the fortress by myself, as my brother was running his own game--LEGO pulp adventures for kids. This time my gunnery was much improved, but when the inevitable assault came, we were driven back to the walls. As it was, I wish we had had time to run that game through to its conclusion--I had enough guns and soldiers left that I think I could have held them off if they tried to storm the walls, but they had actually managed to plant breaching batteries up at the edge of the covered way. Unfortunately we had to call the game at that point,  as a moral victory (at the very least) for the attackers, since no other team all weekend had managed to make so much progress. 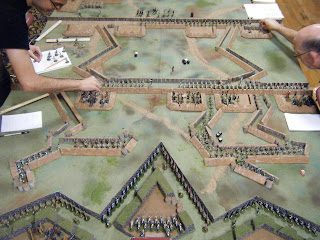 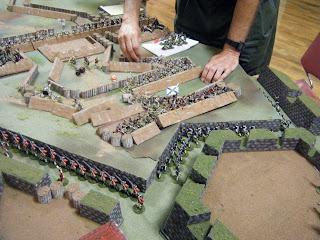 For the fifth scenario, a relief of the fortress is attempted. This time there were sufficient players that my services were not required, so I was in fact relieved. This freed me up to scrounge through the flea market, where I found the most remarkable zeppelin for a mere $5. This I passed on to Chris Palmer, co-author of the popular G.A.S.L.I.G.H.T rules for pulp and Victorian Science Fiction, and a virtuoso scrounger and modeler himself. (If anyone can identify the zeppelin in question, please let me know. My research suggests that it is a toy associated with the Yu-Gi-Oh! cartoon series, but a quick web search was unable to turn up another one.) 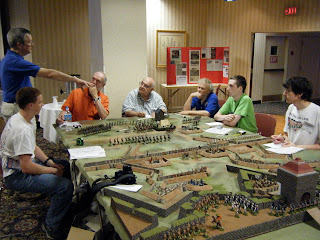 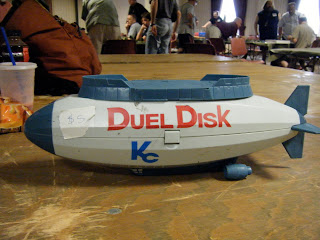 We wrapped up the convention by participating in the "Iron Paintbrush" competition, in which teams of three are given paints, supplies, and a variety of figures and plastic bits, and must use these to construct a diorama that incorporates a randomly selected color (magenta), pattern (stars), terrain element (snow) and theme ("It hurts when I pee.") No doubt you can imagine the sort of entries that resulted, but no doubt a few pictures will be appearing on The Sharp End of the Brush as soon as Dad gets around to it.

And of course, no convention is complete without a new project. I picked up a box of Caesar Miniatures'  "Urban Resisters" and some Revell Vietcong to form the core of a modern Africa game, most likely using AK-47 Republic. Along with a few elderly vehicles from the flea market, these will be the beginning of the Marxist Succession Alliance of Mbotu...
Posted by Norman Dean at 7:43 PM