Many people who know me are aware that I have a long-standing interest in blimps, airships, and zeppelins. So when it comes to Hordes of the Things, I naturally gravitate towards the Airboat unit. As a matter of fact, the very first units I built for HotT were a pair of airboats to supplement my dad's 6mm Elven army. They were kind of blobby things, made of Sculpey and painted green, with big square paper sails on top. For some reason, his elves never seemed to use them much, but they saw service with me from time to time.

Unfortunately, they did not age well, so replacements have been on my vague list of things to do for quite some time now. And, inspired by my recent Hordes games, I finally sat down yesterday and put together some new ones. 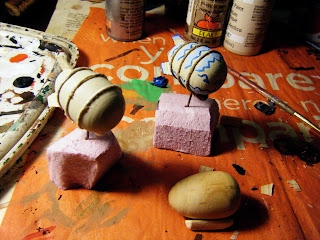 These new airboats are built around some wooden egg shapes, which I believe I found at Michael's. 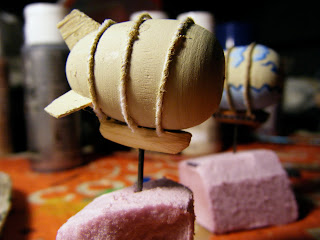 Here you can see a few more details (such as they are) of the construction. The gondolas are whittled out of some wood scraps left over from the great trench-building project, as are the tail fins. The "ropes" are some sort of thin florist's wire, also from Michael's. When assembling these, it's best to attach the gondola first, then the ropes. (I tried it the other way with the first one, and it was definitely more difficult.) 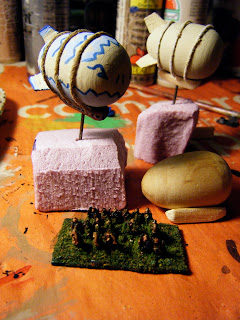 Shown with some 6mm troops for size comparison. I still have one in the early stages of construction, as you can see. It might be a while before that one gets done up. (Why? Because HotT armies are 24 points, and airboats are 3 points, and most units are 2 points, so three airboats is an awkward number.) 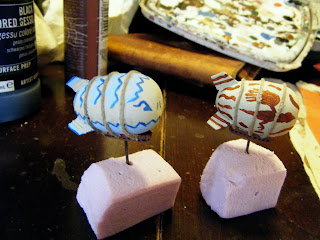 Here's the first two airboats, both painted now. Fun fact: if you play Magic: the Gathering, and are familiar with the card Rishadan Airship, the paint scheme on the left airboat might look familiar. This is not a coincidence.

Also, building these reminded me of a Poul Anderson short story called The Sky People, about post-apocalyptic aero-vikings from Colorado. A HotT army list for them would probably look something like this:

4 Airboats @ 3 AP each (Primitive hydrogen blimps.)
6 Warbands @ 2 AP each (Paratroopers armed with swords, axes, bows, and ceramic-tipped spears.)
The general could be either one, I guess.

In the meantime, I just need to get some bases put on these guys and maybe I can turn around my current losing streak...

Email ThisBlogThis!Share to TwitterShare to FacebookShare to Pinterest
Labels: 6mm, fantasy, Hordes of the Things, miniatures