While my Mongol troops are nearing a state of completion, no self-respecting Hordes of the Things army is complete without a stronghold of some kind--a base of operations to defend when the occasion arises. In the case of my Mongols, this means one thing: yurts!

(OK, just in case a dedicated Mongol expert comes along: yes, the actual Mongol word for these things is ger. But yurt is so much more fun to say, and besides, these aren't exactly historical Mongols.)

A quick survey of the internet failed to turn up any satisfactory commercial yurts in 20mm, and the first few results for "model yurt" seemed to be geared towards kids' projects about constructing a functioning yurt starting with the proper latticework walls made of toothpicks or whatnot. For wargaming purposes, I don't really care about the internal structure of my yurts; they just have to look yurt-like. I figured I ought to be able to knock together something out of cardboard and whatnot that would suit my needs well enough.

Turns out this is somewhat easier said than done. It took a bit of work with a compass, protractor, and calculator before I finally came up with a template that would yield the distinctive shallow cone shape of a yurt. But to save you all the trouble, I am reproducing it here! 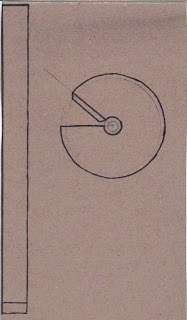 The long strip should be 260mm long, with the tab at the end being 9mm of that. The circle has an outer diameter of 45mm when flat, and 40 degrees is the angle of the arc removed.

I cut these out and taped them together to form the underlying structure of my yurt, like so: 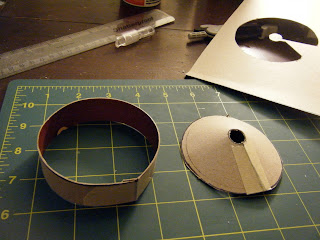 Here I've taped the two sections together. The horse and his buddy are just for scale. 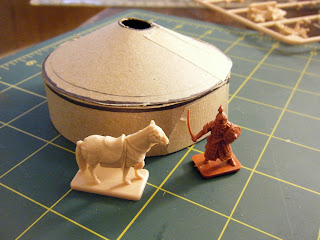 It had been my intention to cover the cardboard with a layer of papier-mâché to give the surface some texture and to conceal the join between the two cardboard sections, so I give this a shot, using tissues as the basis for my papier-mâché mix. 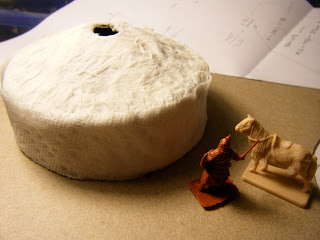 As it turned out, tissues were too thin and became waterlogged, giving the yurt a sort of distressingly lumpy look. In addition, the water began to soak the cardboard as well, such that it looked like it was beginning to lose its shape. I applied a layer of brown paper towel over top, hoping to improve the texture issues, but results were sort of mixed. Also, the yurt ended up looking like a biscuit of some sort. 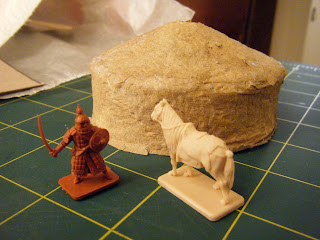 At this point, I figured I might as well try painting the thing. I glued on a thin rubber band to represent the cords that seem to help the yurt maintain its shape. A look back at some pictures of yurts suggests that there really should be two of these. I also glued on a doorway made from a bit of plastic card. (Actually a section of a room key from a hotel...) 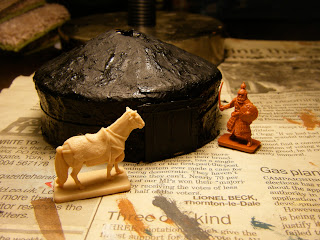 With several coats of paint applied, I ended up with something that doesn't look too terrible. 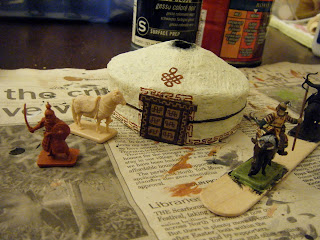 I may do a second one of these at some point, but I'll have to consider how I want to modify the design. The tissue-mâché was definitely a mistake, I think, so I might leave that part out entirely. It would be nice if I could find a way to cut the yurt out of a single contiguous piece of cardboard, but I'm not sure that would be geometrically feasible. Next up, though, I have a couple more stands of riders to finish off--one of them is visible off to the side in this last picture.
Posted by Norman Dean at 12:20 AM