Anyway, I had originally planned to run a couple of Bronze Age games on Friday, but as my job started Monday, that turned out to be impractical, instead I found myself driving down from Germantown to Fredricksburg through rush-hour traffic on I-95 with no one but my not-so-trustworthy GPS for company. I arrived just in time to lend Dad a bit of assistance in running the first of his official NQSYW games. ("Official" because I'm given to understand I missed a pick-up game on Thursday night.) As always, casualties were heavy (particularly among my hussars--a theme that would continue throughout the convention) but at least some of the Wachovian infantry survived to see their side win a skin-of-the-teeth victory (from their vantage point holed up in a walled farmhouse--about the best place to be in Charge!)

Saturday morning I got around to picking up my one-day badge and sifting through the rather sparse collection of games, eventually ending up with a ticket for a French Foreign Legion vs. Arabs game using The Sword & The Flame, of which more will be said in due course. We then headed over to the flea market, where we each found something of interest. Dad came home with a selection of someone's Meisterzinn castings, mostly 18th century but with a few Renaissance arquebusiers thrown in for variety. I ran across a Bronze Age fort section; resin wall, tower, and gatehouse pieces that I think were intended for 15mm but which should still be reasonable with my 20mm plastics. And William bought an entire Playmobil pirate ship, for the munificent sum of $12 dollars. If he does manage to get that painted up for use with his selection of 40mm pirates, it should be quite a sight... but he had an interesting time finding space for that one in Dad's car.

At 1:00 pm, Dad ran his second NQSYW game. Three players turned up, so William got a chance to command his Wiegenburgers as a fourth, while I again took on the assistant gamemaster role. The scenario saw Pragmatic Coalition troops (Schoeffen-Buschhagen and allies) attempting to push a Stanzbach-Anwatsch regiment off a hill before they could be relieved by their North Polenburg allies. This game saw the Pragmatics gain a somewhat clearer victory, and all the players seemed to be enjoying themselves. 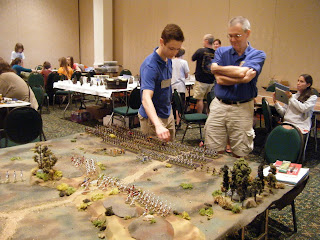 Dad and William get the Pragmatic troops set up. 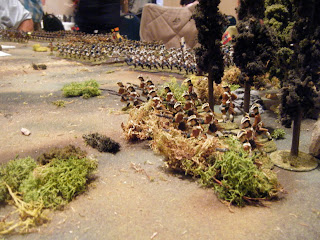 Wachovian light infantry doing what they do best. 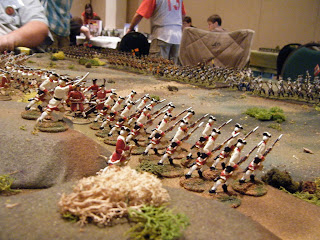 The view from the ridge. 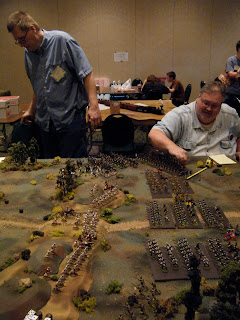 The attack goes in! 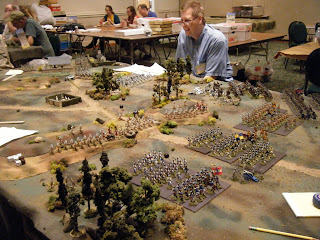 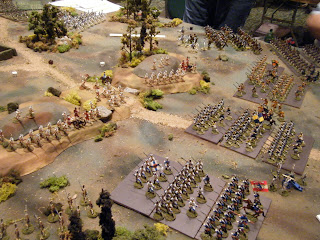 Ranks are getting thinner. Meanwhile in the background, the Wachovian hussars get pummeled again... 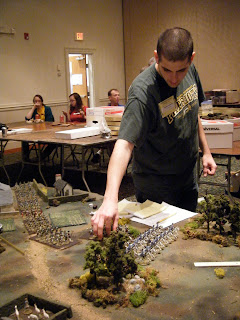 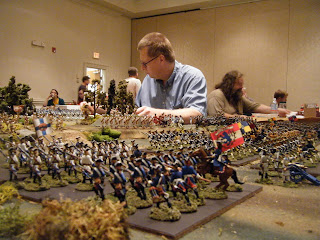 View from the Pragmatic side. 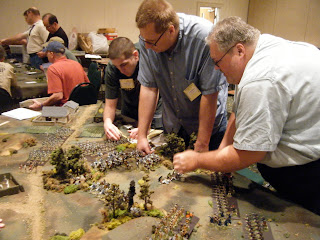 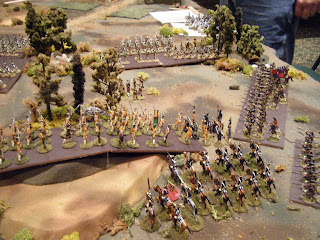 The Wachovians have gained the ridge, but at what cost? 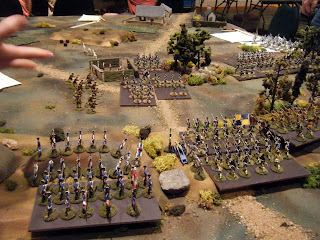 The third game, from the glimpses I saw of it, appeared to be a military disaster for the Pragmatic side, but presumably Dad can talk about that a bit more in his report. I, on the other hand, was off playing colonials... or rather, not playing Colonials, as I ended up commanding the reinforcements that didn't arrive for nine turns. (By which time we had pretty much lost--I had a brief shining chance to affect the game if the initiative cards came up right... so naturally they didn't. Ah well.) 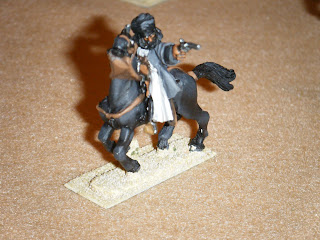 At least the figures were nice.

After helping Dad get everything packed away, I headed back to my new place Sunday morning--this time through more reasonable traffic, and with another convention behind me.

(Fortunately, Dad also got a chance to hand off my desk lamp, which I had left at home--so now maybe I can get some painting done in the evenings...)

A couple more pictures of other interesting games in the HAWKS room: 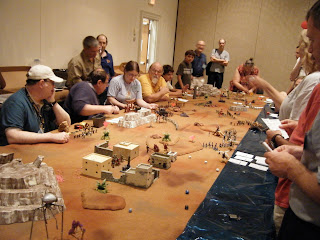 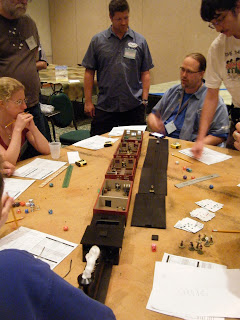