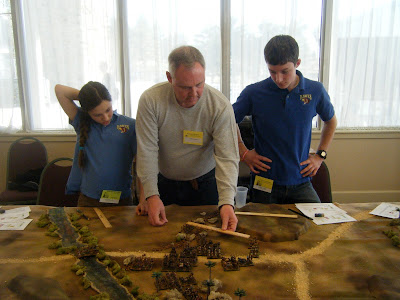 Another year, another Cold Wars come and gone--this one made a little odd by the absence of my father, who ended up with an inconveniently-scheduled business trip for this past weekend. So it was left to me to collect up my brother William and make the annual pilgrimage to Lancaster, Pennsylvania for the winter HMGS convention. (Not that it felt particularly wintry this weekend, though there was a snowstorm that missed by just a few days.) We were joined Friday night by one of my collegiate comrade-in-arms, Marc, who has actually made it to a fair number of conventions by now.

Having passed through a couple of stretches of slow traffic coming up Friday evening, we got to the hotel just in time to collect our badges, grab a bite of dinner, and take a look at the program. As it happened, one of our club members was in need of a couple of extra players, so William and I found ourselves on opposite sides of a WWII Eastern Front scenario, he as a Russian and I as a German. The Germans had a couple of tank units and some infantry in a mix of trucks and half-tracks, looking to capture a pair of bridges and a nearby air field; the Russian force was hunkered down in concealed positions at the start of the game. 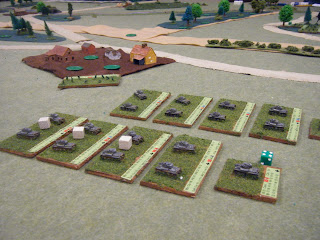 I found myself in command of the German light armor--after some discussion with my co-commanders, it was decided that I should try to drive straight for the airfield. We quickly discovered that the nearest town was chock-full of William's Russian infantry. I attempted to circle around this, hoping that the guy behind me with the infantry would be able to mop it up, but as it turned out, the Russians put up a surprisingly tough fight, and we were unable to drive them out of the town. (One particular Russian mortar squad managed to destroy three German units... in hand-to-hand combat!)

Meanwhile, my tanks rumbled over a wooded ridge to discover... Russian tanks! It took a couple of turns for us to sight each other, as spotting was not automatic in the particular ruleset being used. (The WWII version of the currently-popular "Look, Sarge! No Charts!" for those who are curious.) However, once we did, I managed to take out one of his units that had been caught in the open, while my tanks remained relatively safe in the rough ground. 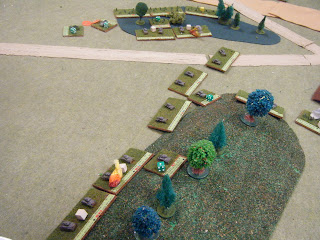 While I was exchanging ineffectual fire with the remaining Russian tanks, who had found their own woods to hide in, one of the other German players sent his half tracks swooping around to seize the airfield. Unfortunately, our third player was unable to make much progress against the Russians on his side, and could not break through to the bridges. With only one of the three objectives in our hands, the game went to the Russians.

The next morning, after gorging ourselves on the hotel's breakfast buffet, William went off to lead the British revolt against the Romans, while Marc and I wandered around to look at the games and ended up getting drafted into a second WWII game--this time a late-war Western Front skirmish, using 54mm figures. We both ended up on the German side, with a squad of infantry, some support weapons, and a tank in need of repair, holding a couple of buildings against an American scouting force with a pair of armored cars and some infantry in Jeeps. 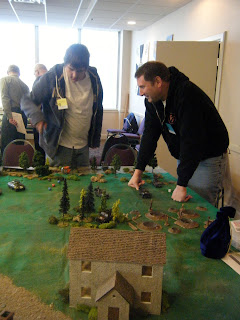 As it was, those Jeeps ended up being the Americans' downfall--they were a little too overconfident in sending them forward, and our single infantry squad turned out to be packing a ridiculous amount of firepower, enough to put two or three of their Jeeps out of action as they tried to traverse an area of woods and shell holes. One Jeep did make it up to the building, only for the three guys to be taken out by a single grenade tossed out the window. Our total losses consisted of a single light wound, and the commander of Marc's light machine gun, who suffered a panic attack and fled off the board.

That game wrapped up early enough that we had a chance to make it to the Saturday morning flea market, where I made a serious tactical error--as I walked in, I noticed a guy with a large pile of promising-looking boxes of 20mm plastic miniatures, but rather than cutting straight across, I figured I'd take the long way around, as I wasn't in a particular hurry. Naturally, I arrived at the table just in time to find someone else scooping up not just the bulk of the figures, but even the plastic tub they'd been sitting in! Still, there were a few worthwhile sets left in the remainder--some Barbarian Warriors and Macedonian Cavalry for William, some Persian Infantry picked up on Dad's behalf, and four boxes of MiniArt's Germanic Warriors, which I obtained for myself at a very advantageous price, which will probably get subsumed into my 20mm fantasy armies. 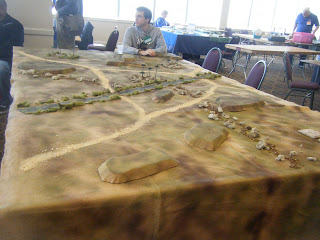 Saturday afternoon was the long-awaited convention debut of the Bronze Age project, which longtime readers of this blog may be familiar with. The rules used were a somewhat revised version of those I had come up with for last month's playtest, which seemed to be well-received by the players. I will save an in-depth discussion for some other time and merely provide a link to the version I used. (Which will be up for some revisions based on observations from this game, but again I will save that discussion for later.) The Hittites had to escort Prince Zannanza and his baggage train across the board; the Egyptian players were generally attempting to kill the prince and capture the baggage, though priorities varied among players. 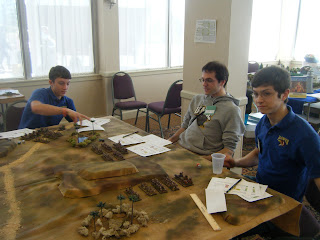 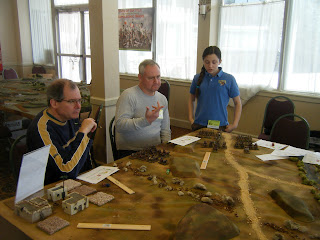 The board had a river running down the center; the Hittites had to exit the board on the far side of the river. The river was fordable with a difficult move all along its length, but two distinct fords marked clear paths across. A number of hills, scrubby rough ground, and dry stream beds broke up the board further. The Hittite players decided to push their main force across at the northern ford, while their ally moved down to the southern ford. The advance across the northern ford was met by the Egyptian chariot force, while the Egyptian allies awaited their rivals to the south. 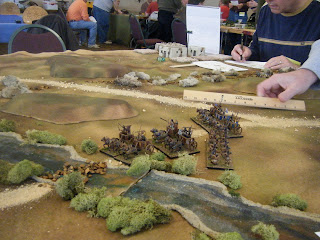 Hittites going for the ford. 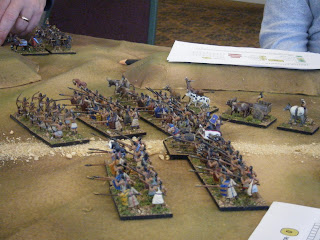 Hittite infantry with the baggage. 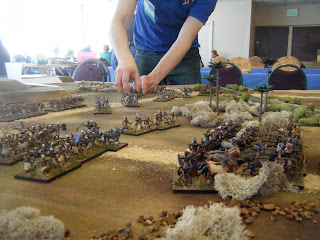 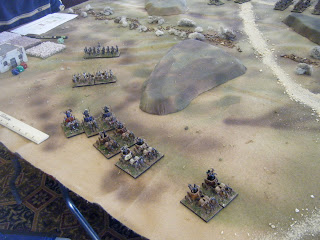 The fight for the north ford became a real meatgrinder, as the Hittites committed more and more troops. The Egyptian chariots put up a stiff resistance, but were unable to find room to fall back and regroup, and eventually were destroyed. The Egyptian mercenaries left their employers to their fate, intent on the baggage train on the other side of the river. Meanwhile, the confrontation between the allied contingents edged towards stalemate, as the two sides exchanged missile fire across the river. 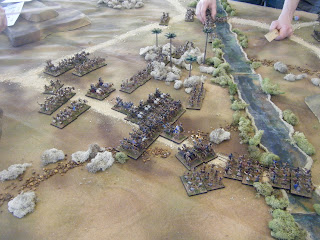 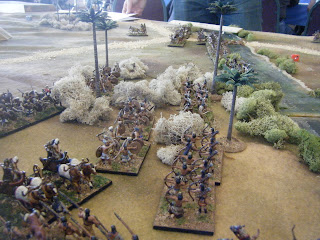 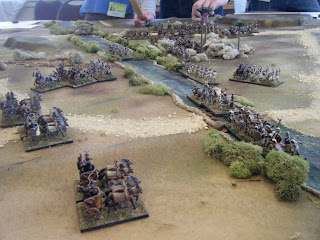 Standoff at the south ford.

The final destruction of the Egyptian northern wing marked the beginning of the end, as the Hittites were able to get their baggage train headed for the now-open crossing--narrowly escaping their mercenary pursuers who had crossed the river and looped around. With the baggage safe and the prince's route to Egypt open, it was a pretty clear Hittite victory. Everyone seemed to grasp the rules and remain engaged and entertained throughout, so I will count this one as a victory for me as well!

After packing up the chariots and grabbing some dinner, we headed off to our evening games--William to some brawl between Alexander's Successors, and Marc and I to a Spanish Civil War game. Unfortunately, even the People's Tractor could not keep my POUM rabble from running off the table at the sight of Italians on motorcycles, and Marc's Stalinist sympathizers and their armored car ended up on the wrong end of some mortar fire for an early end to the evening. 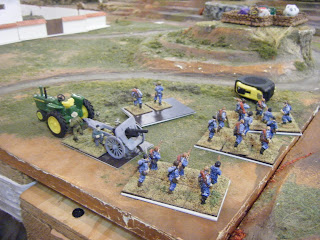 Sunday morning we packed up our bags, provisioned ourselves, took a last look through the flea market and the dealer's hall (I found some Airfix Robin Hood figures and a plastic wolf) and headed south again, with another convention behind us.

A few more pictures taken throughout the convention: 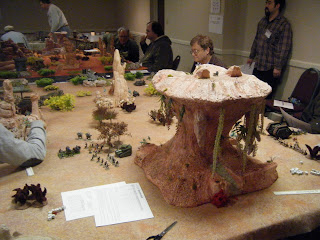 Friday evening: a Victorian science fiction game set on Mars, featuring a rock formation that may or may not have been a toilet. 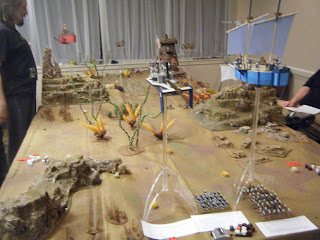 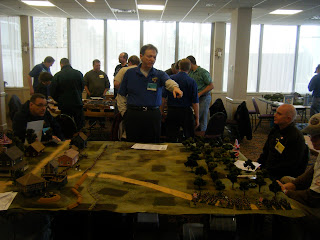 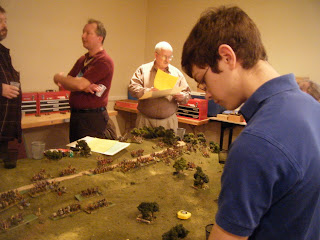 Saturday morning: William faces off against the Romans. 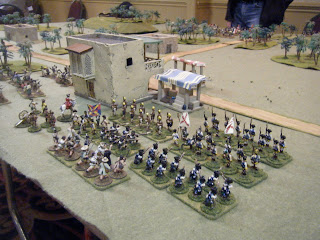 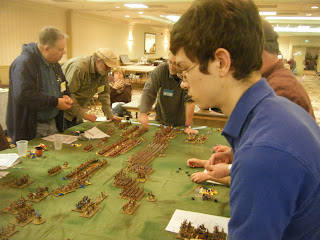 Saturday evening: William at the Battle of Magnesia. 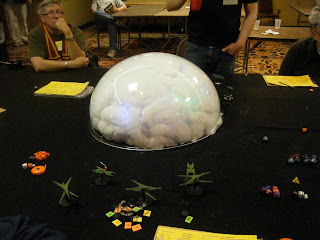