It has been a long time since I've done one of these posts, but as it turns out, these days I have even less time for map-making than I do for miniatures-painting. However, here at last I have enough maps to make another collection worthwhile. As always, please don't mistake these for real history!

First up, a look at a world where a natural disaster devastates the early United States:


From A House Built Of Flotsam: Early American Government and the Great Wave by Brewster Rogers (2006):

"At approximately 7:00 on the morning of May 17, 1786, Captain Harrington of the British merchantman Nancy, bound for Calcutta, noted a pillar of clouds or dark smoke to the southwest, in the direction of La Palma Island, one of the westernmost of the Canaries. About half an hour later, the ship was caught by an enormous swell, described by Captain Harrington as 'larger than any man on board had ever seen, and arising from a calm sea.' Harrington and the crew of the Nancy had been among the few to observe the eruption of the Cumbre Vieja volcano, and among the first to encounter the resulting poseidonic wave [1]...

"In recent decades, geologists and oceanographers have identified the proximate cause of the Great Wave: a lateral collapse event occurring on the westernmost flank of the island, which sent almost 100 cubic miles of rock plunging into the Atlantic ocean. Like a tiny stone thrown into a still pond, the ripples spread outward--but in this case, the ripples were poseidonic waves up to fifty feet high...

"Much of Europe was shielded by the eastern Canaries, though areas of northern Spain, northwestern France, western England, and Ireland all experienced heavy damage. Areas of coastal West Africa were devastated as well. Still, it was across the Atlantic that the Great Wave would be felt most keenly...

"Based on reports from survivors, the first waves reached the south end of Nova Scotia at approximately 8:30 a.m. local time. Points south were contacted over the course of the next three hours, with parts of East Florida not being reached until almost noon. To observers at the time, contact must have seemed terribly capricious, with some areas shielded by some nigh-imperceptible quirk of the coastline, while others suffered even greater damage from waves funneled into bays and straits..."

"Boston was devastated... Much of Connecticut was shielded by Long Island, even as the Eastern Shore protected Baltimore and the Upper Chesapeake... New York City did not escape unscathed, but the damage could have been much worse. Philadelphia itself was spared, but Delaware Bay was choked with debris that took weeks to wash ashore. The Tidewater areas of Virginia, the most densely populated area of the state, was also the most badly damaged... All up and down the eastern seaboard, the same pattern of destruction was repeated. It was an event that could not help but leave a stamp upon a fledgling nation and its unwieldy government...

"Even before the Great Wave, there had been a growing dissatisfaction with the Articles of Confederation. In the aftermath of the disaster, as the helplessness of both the affected states and the Confederation government became clear, the 7th Confederation Congress, under the leadership of its President, John Hancock, began work on a new constitution--one which would vastly expand the powers of the central government..."

[1] TTL name for a tsunami--named for the Greek god of oceans and earthquakes.

Quick version: the Cumbre Vieja volcano goes off in 1786; a massive tsunami devastates the United States. The magnitude of death and destruction is enough to put a bit of a wrench into American demographics; while there is a general drive to settle further west, the country can't really support expansion on the scale of OTL--the U.S. may eventually cross the Mississippi, but probably won't reach the Pacific. The "Departments" are the result of an urge to consolidate and centralize--the states still technically exist, but the Departments end up being the main units of federalism. The capital is New York--parts of it, including Federal Hall, weren't too badly damaged, and nobody really felt like building a brand-new capital in some Potomac swamp when there was so much rebuilding to do... 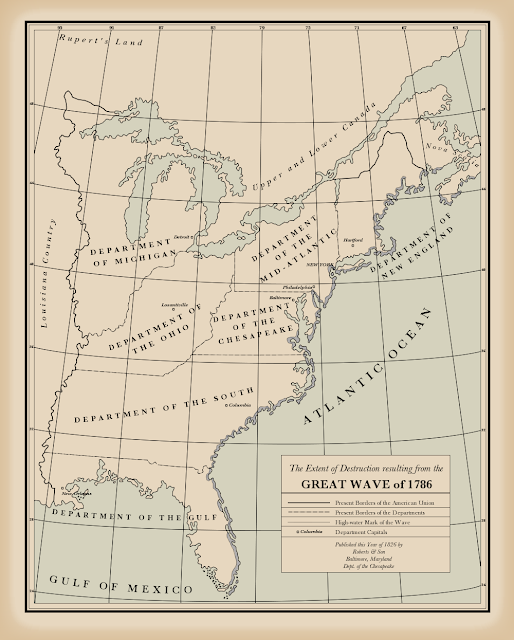 Next, a quick look at a world where Constantinople Istanbul is known by another name entirely:

This map shows a few of the major tourist attractions in the Old City of Miklagard. Backstory is a little hazy, but at some point an unpopular Emperor gets deposed by the Varangian Guard, who end up running the Empire for a while through a series of puppets. While this state of affairs lasts only a few centuries, it does leave a lasting impression in the languages of northern and western Europe... and so, when rich Aenglisk-speaking tourists from the Westlands book their lyftship flights for a vacation on the Golden Horn, they arrive at Miklagard Lyfthofn. (Even if the terminal also has signs posted in Greek and Kypchak.) 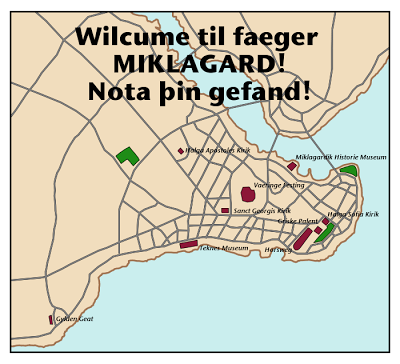 A world where the Americas are discovered by a more northern route, showing some misconceptions of early cartographers:


From Maps Through The Ages, Cecille Frampton, 1973.

"Although settlement proved infeasible for the Norsemen, sporadic contact continued up through the end of the fifteenth century, when a number of explorers in more southerly countries began suggesting that the riches of the East might be more easily reached by sailing west, and that the rumored "Vine-land" might provide a convenient stopover point. As a result, many of the early navigators chose a more northerly route, and only gradually did the extent of the Hesperian continent become apparent. In fact, for a long time, North Hesperia was thought to be a part of Asia, as shown in this map from 1501, which optimistically places the "Great Cham of Tartary" somewhere in northern Mechicoe. See also the existence of a Southwest Passage connecting the Atlantic and Placidic Oceans--this may have been wishful thinking on the part of the cartographer, or it may have been based on second or third-hand accounts of trade routes across the Isthmus of Tecwanipec. Note that the Mayapan Peninsula, though misidentified as an island, is labeled as a source of spices, which may indicate that occasional trade was taking place between Europeans and native Hesperians at the time of the map's printing, or may be another misconception on the part of the creator, confusing Mayapan with the Spice Islands of the East. Information on the interior of the continent is similarly vague; for instance, the Great Lakes are shown as a single inland sea--source of the Mississippi and the Cabotto as well as the St. Brendan..." 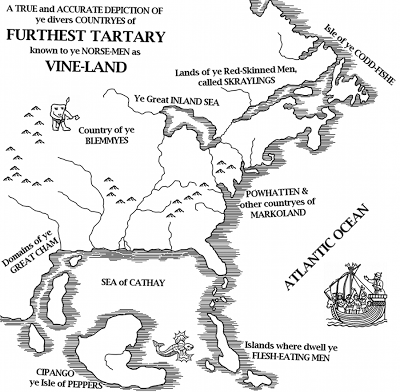 And finally, a world where the Mongol Empire reached some places it never conquered in our world:

In our history, the Mongols under Genghis Khan reached the Indus River in 1221, in pursuit of the last Shah of Khwarezm, Jalal ad-Din. After his defeat, he sought asylum with the Muslim rulers of the Delhi Sultanate. In our history, they turned him away, and after knocking around northwest India for a bit he returned to Persia, where he was eventually murdered.

But what if Iltumish, the Sultan of Delhi, had not turned him away? What if the Mongols had continued to pursue their old enemy to the walls of Delhi itself, and the city had been sacked by the implacable hordes of Genghis Khan?

In this world, Iltumish chooses to take in the exiled Jalal ad-Din, and offers great insult to the Mongol ambassadors who demand that he surrender his guest. Dorbei and Bala, the Mongol commanders in India, send word of this to Genghis, who dispatches the famous general Subutai to reinforce them. Subutai handles the Indian campaign with the brilliance which in our world he demonstrated in the invasion of Europe, and Delhi is sacked by the Mongols in 1224. Jalal ad-Din is captured and sent to Karakorum in chains, but dies along the way.

Genghis Khan dies roughly on schedule, and as in our world, his son Ogedei succeeds him. Subutai's assignment to India means that his expedition against the Rus which culminated in the battle of the Kalka River never took place. Without that initial expedition, the Mongols do not launch an invasion of Europe during Ogedei's reign, instead mopping up the remnants of the Delhi Sultanate despite the determined resistance of Iltumish's daughter Razia Sultana. Differences in Mongol internal politics become apparent around the death of Ogedei--Genghis' grandson Batu has spent his time at court rather than leading armies across Russia, and manages to outmaneuver his rival Guyuk to take the throne.

As in our world, the Mongol empire eventually falls apart under its own weight, but in this world, one of the successor states, under a line of Khans descended from Subutai's grandson Aju, reigns from Ordapur, a new royal district of Delhi built after the sack of 1224. The Delhi Khanate reaches its apex under Sartaq the Great--though a later Khan does reach the Coromandel coast, his conquests are achieved only at the cost of much of the north to a resurgent Rajput dynasty, and his gains in the south are recovered by the Pandya kingdom of Madura during the reign of his successor... 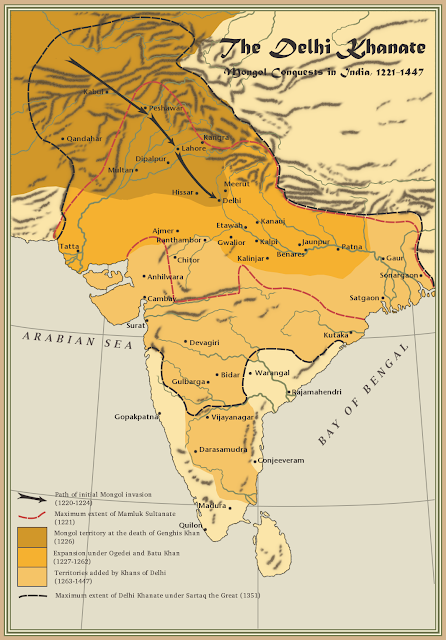