You may notice the new title banner; I was playing around with some functions on GIMP and ended up with something that looked a bit like a barren alien landscape, so I figured I'd put it to some use. But it got me to thinking, briefly: despite the name of this blog, there's really not much science fiction content at the moment, despite me being an avid SF reader. So why is that? I have a theory. So far, most content on here is related to miniatures projects, but a lot of science fiction miniatures are tied to well-known and visually distinctive settings: Warhammer 40K or Battletech, for instance. On the whole, I don't tend to play a lot of these--I really like to make up my own settings. (You may note that even my "historical" projects tend to the "imaginary countries" side of things.)

So whereas there are generic "fantasy" figures that I can (and do) co-opt for my projects, I haven't really come across any SF equivalents. An orc is an orc, but a Mad Cat II is not a Leman Russ. And on that note, more Hordes of the Things figures! 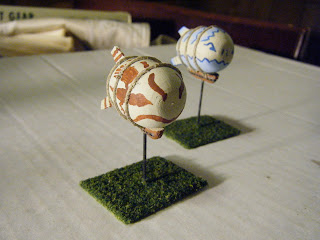 Here are those 6mm Airboats, all based up. Haven't played any games with them yet, though. 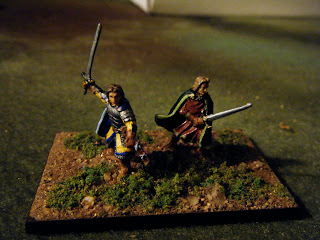 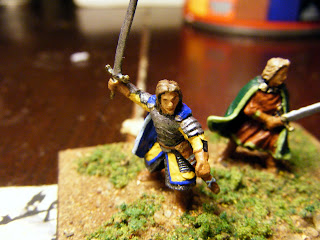 And on the 20mm side, we have this Hero stand. These guys are "adventurers" from Caesar's 20mm fantasy range. I have a few more on my to-do list: a Magician (who looks suspiciously similar to Gandalf) and an archer who I think I may deploy as a Sneaker. 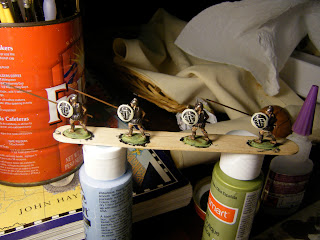 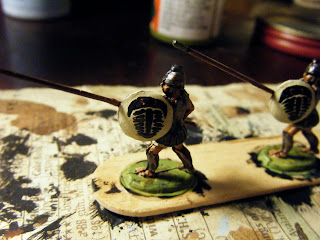 I was down in Washington DC on Monday, and stopped by the Natural History Museum to have a look at the trilobites. As you can see, I took a bit of inspiration from them for these guys' shield design. These are HaT figures, from a random box of Macedonians I picked up many years ago just on speculation. These four make up half a stand; I hope to get the other four done tomorrow, or maybe this weekend. I'm thinking these guys may be the start to an opponent army for the Dinotopians. (Maybe other units will have different prehistoric sea creatures on their shields? I'm thinking ammonites for the next unit...)

Just a random aside: after poking around the Natural History Museum for a few hours, I walked across the Mall to some of the other Smithsonian buildings--namely, the Freer Gallery and the collections of African and Asian art, which are also excellent inspirational material for painting. The amount of finicky detail that pre-industrial artists put into their work never ceases to amaze me. I think the urge to decorate must be one of those primal things that every culture shares... 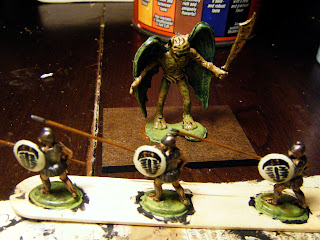 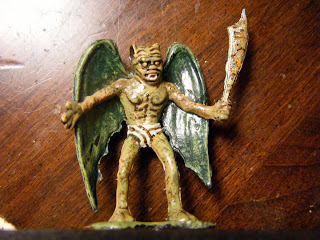 Finally, we have this guy. I think he will be classed as a Flyer; he's not big enough to be an Airboat, not draconic enough to be a Dragon, not imposing enough to be a God, and not heroic enough to be an Aerial Hero. I don't know much about his provenance--he was made in Hong Kong, and he and about half a dozen of his variously armed brethren have been among mine and my brother's possessions for as long as I can remember. He's a bit short when facing off against 54mm figures, but more impressive at 20mm.

Email ThisBlogThis!Share to TwitterShare to FacebookShare to Pinterest
Labels: 20mm plastic, Hordes of the Things, miniatures