Battle of Uru Adaniya, Round 1

Finally got around to running a game with the Hittites and Egyptians, which I haven't done for quite a while. I will most likely run it again tomorrow, as I have some tweaks in mind for the rules.

The original plan for the Bronze Age was to use Warhammer Ancient Battles, but lately I have been considering other options, since WAB really prefers individually-based figures and we've been painting them up in stands of about 4-8 figures. As it happens, a few weeks ago my dad and my brother and I played a game via Skype against our friend Ross McFarlane, using his Rough Wooing rules for Renaissance warfare. On the way back from Cold Wars the other weekend, Dad and I got to discussing whether Rough Wooing could be adapted for the Bronze Age, as it is more amenable to our current basing scheme.

I decided I would give it a try, and since Dad's currently off on a business trip, I enlisted my brother William to command the Egyptians. The scenario was a pretty straightforward one, with Egyptians deployed with their backs to a river and the Hittites coming down out of the hills. Going into the game, the only major adjustment I made to the rules was the addition of javelins, since several units on both sides are equipped with them. I gave them a range of 6" and figured they'd be treated like any other ranged weapon. Rough Wooing contains several different grades of cavalry, but I compressed these down to two: the heavier lance-and-javelin-armed Hittite chariots were given a move of 3d6, a frontal to-hit of 3-6, a flank to-hit of 5-6, and an armor save of 4-6, while the lighter bow-armed Egyptian and allied chariots were given values of 4d6, 4-6, 5-6, and 5-6 respectively. 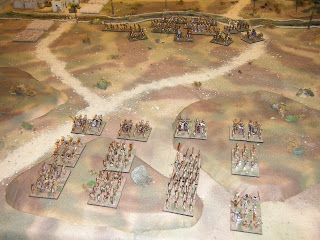 Given the size of our table and the fact that both sides put their chariots out in front, the game began with a series of chariot clashes all along the table. Despite their advantages, my chariots did not come out ahead in the melees; two groups were forced to fall back. (Looking back, the Egyptian chariots probably should have been given the option to pursue.) 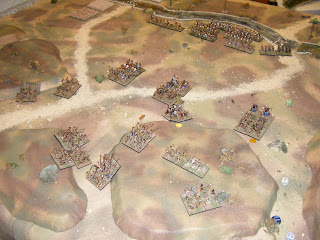 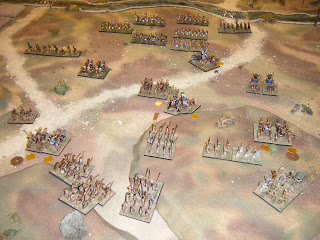 Before and after the first melee. Note that the Egyptians have lost a chariot group in the center--not from the melee, but from bow-fire from the archers on the hill and javelins from Hittite chariots that weren't quite in charge range.

The next few turns saw some skirmishing on the flanks--where the Egyptians' Nubian skirmishers wiped out an entire group of archers before being taken out by some of my javelin-armed light infantry, while my chariot gave a poor showing in the center as that melee moved from mainly chariotry to mainly infantry. Eventually both sides' chariot divisions were reduced below half strength and forced to retreat off the field. 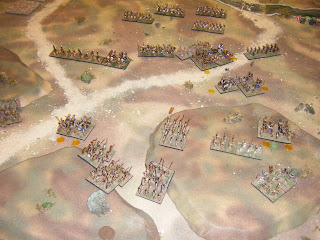 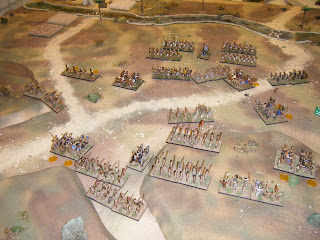 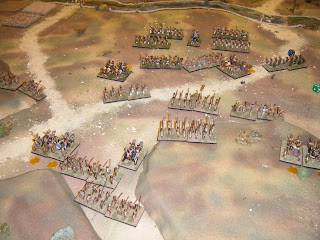 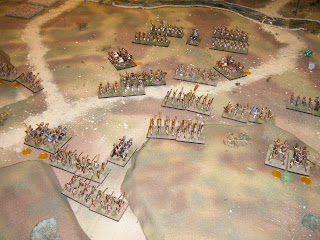 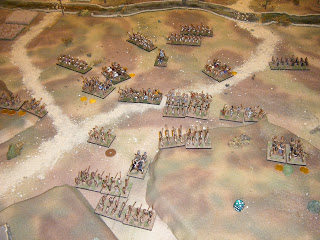 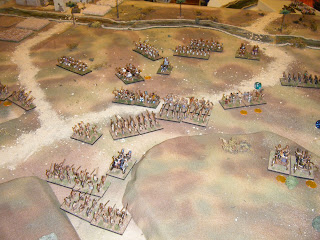 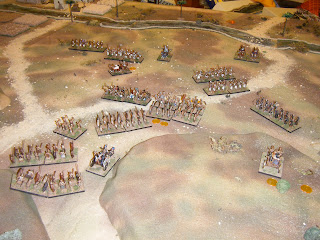 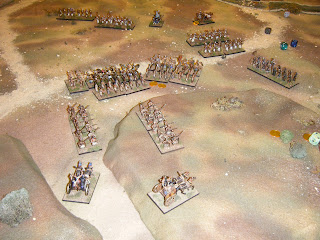 The evolving board position.

The last clash in the center brought up one final problem. Working on the notion that my blocks of spearmen were probably not the equal of Renaissance pikes, I decreed that they wouldn't get to use the special pike advantage of rolling four dice instead of two. Unfortunately, this made them strictly worse than everyone else, since they could only hit on a 5 or 6 and had no armor, while the troops they were facing would hit on a 4, 5, or 6 and had some minimal armor which saved them a few casualties.

While the game sort of worked, I was not entirely satisfied with how it went. Ranged combat seemed to have a definite advantage over hand-to-hand, which didn't seem appropriate for the period I am attempting to simulate. The number of javelin-armed units did not help in this regard. So, changes that will be in effect for the next game:


There will also be a couple of minor tweaks to the scenario:
Anyway, tomorrow we'll play it again and see how it goes!
Posted by Norman Dean at 9:50 PM