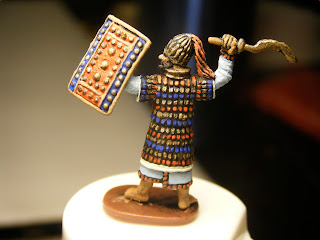 Well, it's been a pretty productive month for painting, all in all, having finished up a goodly number of Bronze Age troops of various types--some of whom were covered in a previous post and the rest of whom will be on display today. 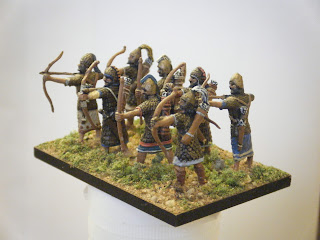 First up, we have a block of armored archers. ("Phoenicians," by the WAB army list.) I had one unit of these guys already, but as a general rule I like to have at least two of everything, so I managed to scrape together enough guys for a a second unit. Most of them are extras from the Caesar Mitanni Chariot set, but there are a couple of extras--the guys with the shorter tunics and big curvy plumes were actually taken from a box of Caesar Trojans, and two of them are converted from Airfix Romans (or probably the HaT reissues of the same) with heads swapped in from some of the Mitanni. I actually got these guys done before last weeks' games, where they served without any great distinction--if I recall correctly, they didn't score a single hit in the second game, and ended up retreating across the ford before things got too hairy for their side... 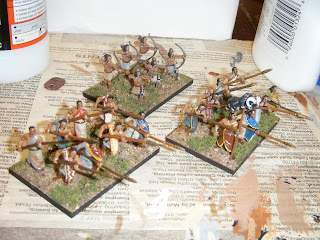 Next up, I painted three units of actual Hittites--two units of spears and one of archers. I had a bit of fun with some of the cloaks, but they're mostly just to bulk up the Hittite force. If I can get one more spear unit done, I'll have eight--enough to deploy in two blocks of four, which would be nice. 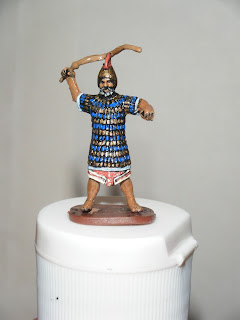 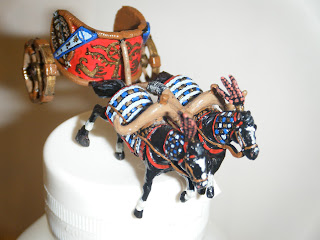 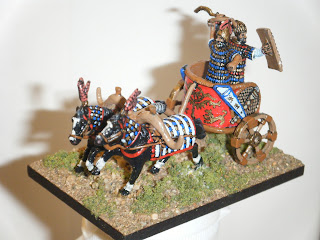 And the finished product--the other fellow can be seen at the top of the page...

And finally, we have another chariot! I had some fun doing this guy up, with the help of Dad's new optivisor. He'll serve as the leader of the everybody-who-isn't-a-Hittite army when the Egyptians aren't around. Incidentally, that design on the chariot is actually based on a historical source, for once--a seal used by one of the kings of Mitanni.

That will probably conclude this month's painting, unless I get really ambitious in the next couple of days. I do want to get that last unit of Hittites painted up, and I have some more Sea Peoples glued to sticks awaiting my attention, but they'll probably wait. I also have a few things on order that should arrive sometime in the next few weeks: some more Mitanni chariots and a box of Caesar's Assyrian chariots. I want to see if I can add a bit more variety to the Anti-Hittite League with a Middle Assyrian contingent--from what I can tell, they were equipped pretty similarly to other armies of the late Bronze Age, so I'll put some Assyrian crew in the Mitanni chariots and see how they look. And Dad is talking about getting a NQSYW game on the table, and I still have bunches of Poles and Cossacks and giant plaster trilobites and all sorts of other stuff, so we'll just have to see what April ends up looking like.