Battle of Uru Adaniya, Round 2

Well, I thought the game went better this time around. (And not just because I won...) More of the battle was decided by melees, but ranged combat still had an effect. Javelins seemed more balanced, though I seemed to have a knack for rolling hits with them anyway. Blocks of spears put up a decent fight. (Though they didn't get a chance to face off against the javelin-armed infantry on the Egyptian side, which would have been interesting.) All in all, it had more of the proper feel to me. The tweaks to the scenario seemed to work as well--splitting the chariots into two divisions gave them more staying power, and deploying the Hittites in line instead of column gave us a bit more maneuvering room. 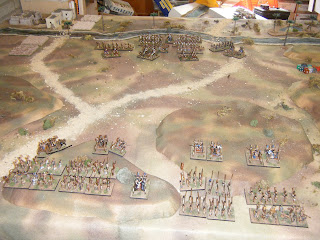 Positions at the start of the game. 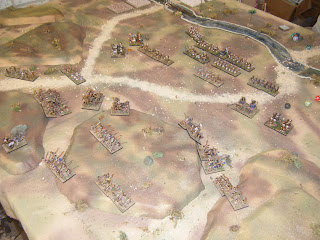 The first turn: the Egyptian chariots move out to the flanks, while I move mine to the right. 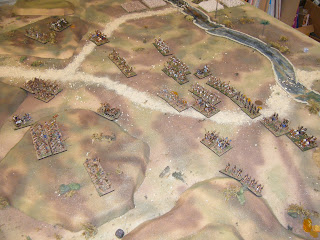 One of my chariot groups from the left division attacked the infantry in the center and lost. However, a group from the right division has driven back the Egyptians' leftmost infantry unit and has pursued into their second line. The Nubian skirmishers have made mincemeat of my own light infantry archers on my left, while my other light infantry on the left are moving up to deal with the Egyptian chariots coming in. 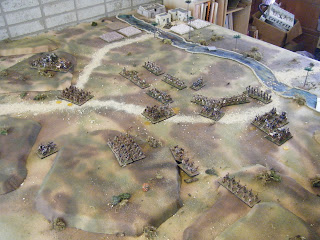 Several melees begin: on the hill to the left, my light troops against the Egyptian chariots. In the center, my chariots against his infantry. On the right, a big chariot fracas. 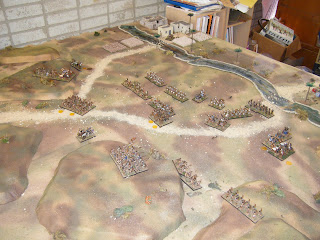 The situation after the resolution of the first round of melees. On the left, my light infantry have successfully driven off one chariot group but now have to deal with the other. In the center, the left-hand chariots have broken a group of Egyptian-allied infantry and pursued on to the next. (Note the casualty markers behind them--those chariots are one casualty away from breaking... and remained so for the rest of the game.) Going down the line, my next unit of chariots has driven back another stand of Egyptian infantry--and some ill-timed maneuvering has given them the opportunity to pounce on the flank of another. And on the far right, each side loses a stand of chariots but the melee continues for another turn. 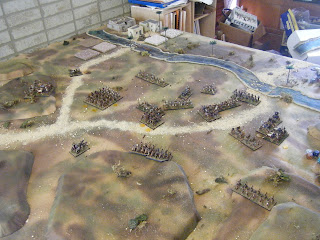 I won the initiative at a crucial point here, allowing me to send in my chariots in the center before William could get his infantry turned to face. On the far left, the melee continues. William's Nubians withdraw behind a line of Egyptian regular infantry who engage my block of spears. On the far right, I bring up some light infantry to support my chariots. 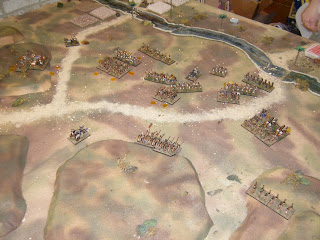 After this round of melee, my troops on the left have started to gain the upper hand. My infantry continues to push forward against his, and my chariots continue to grind through his other infantry, basically leap-frogging from one to the next. His chariots on the right have wiped out mine, but were significantly weakened in the process; they were quickly dealt with by my light infantry. 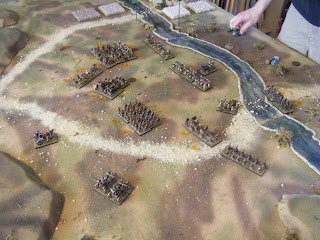 Things are not looking so hot for my opponent at this point. He has pulled together a new line of archers in the center, but I have a fresh block of spearmen advancing to face them. (I had pulled back my remaining chariots in case they might be needed later--and I didn't really want to charge them into three undamaged stands of bowmen.) His chariots on both the left and the right have been driven from the field, though my light infantry is pretty chewed-up. However... 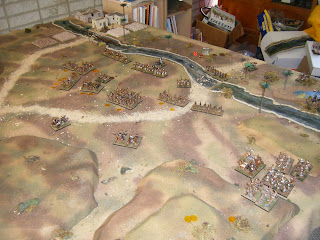 At this point, the Egyptian reinforcements arrive on the field--four fresh units, including chariots. (Note that his infantry on the left have finally cracked--his infantry division is near half-strength; the loss of one more stand will break it.) 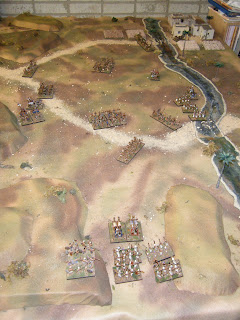 And there they go, heading for the ford. I pull back and disengage along the line, in some cases wheeling a bit to face the new arrivals. The Nubians shower my spear block with arrows before falling back, pushing them almost to the breaking point as well. It was at this point we called the game, since I had done pretty much all the damage I could. Of my four divisions, two were only one or two casualties away from breaking. The Egyptians, not counting their reinforcements, had lost three of their four initial divisions (two chariotry, one infantry) and their fourth was in bad shape as well. All in all, I would call that a Hittite victory, though not a cheap one.
Posted by Norman Dean at 7:21 PM