Now that I've signed up to run a pair of Bronze Age games at Historicon this summer, I've been focusing on getting more figures done for that particular project--there's a number of things I would like to get done before then, and only a couple of months to do them.

First up, my eighth and probably final (at least for now) block of Hittite spears. I have plenty of these guys already, I've painted pretty much all the ones I own, and I don't think I'll need any additional ones for the scenario I have in mind. 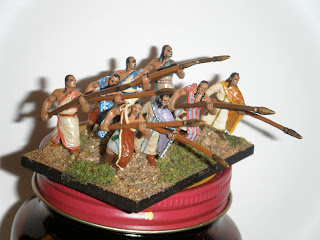 Next up, the first fruits of my brainstorm from a few weeks ago. This is intended as an Assyrian chariot from the period stretching from the Assyrian Old Kingdom to the end of the bronze age, suitable as vassals of the Mitanni kingdom or a power in their own right. Its historicity is somewhat suspect, as I basically just swapped out some horses and stuck some of Caesar's Assyrian Chariot crew (who are from an era several centuries later) in one of their familiar Mitanni chariots, but it looks different, and that's what counts for me here. 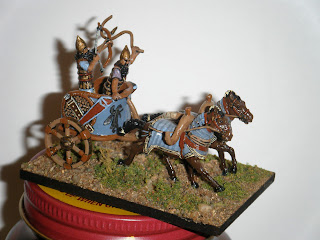 One thing that I will need for my game is a baggage train--I have some cows and an oxcart already, and I wanted to add a few more elements to that. So here's a pack donkey who has been sitting in my box unpainted for some time. He actually started life as a zebra from a Tarzan set, but a blob of modeling putty and some florist's wire has given him a new purpose in life. (I have another one sitting in a box somewhere that I haven't got around to loading up yet.) The fellow along with him is one of Caesar's Hebrews, who I painted up a while back as one of a few random civilian types. 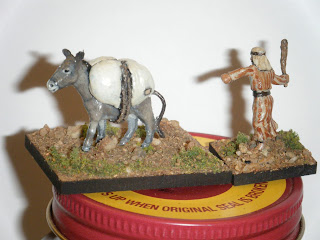 Lastly, here we have another stand of the ferocious Sea Peoples. I finally got to the craft store this weekend to pick up a few new brushes, which has made the detail work on these guys considerably easier. Their active poses make them a little difficult to fit eight to a base, but I managed. 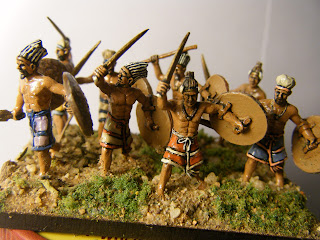 In the pipeline now are some additional cows, one more stand of Sea Peoples infantry, and more chariots (of course), including a standard-bearer for the Mitanni, the rest of my Assyrian contingent, and a leader for the Sea Peoples. After that... we'll see. I have my eye on some Arabians, but I really just want the scruffy infantry; I don't have much use for those camels...
Posted by Norman Dean at 5:58 PM