A couple of my brother's friends came over for a game today, so Dad decided to haul out his old multiply-based Dark Ages armies and try them on a little Warhammer Ancient Battles action. (Somewhat tweaked to account for the basing and whatnot.) William and I took the defending Saxons, while our guests took the marauding Vikings. We set up position with a small village to our right, and a pair of low hills between the opposing armies. 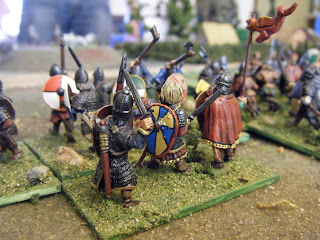 The Saxon Eorl prepares for battle. 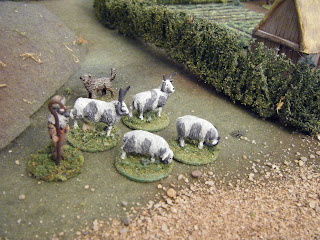 Little does this shepherd realize that his peaceful pastures will soon be soaked in blood!

The first few turns were fairly uneventful, as both armies advanced towards each other. The Vikings took up positions on a pair of small hills, much to our chagrin, as we figured the high ground would make them difficult to push back. 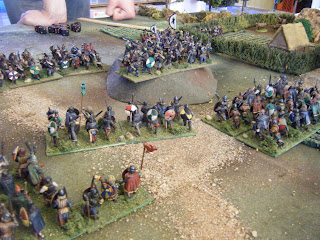 Vikings on a hill. Saxon huscarls moving up on the left, thegns to their right.

The next couple turns saw the armies meet and clash--a group of lighter Viking bondir dashed out from the Viking lines to attack my elite huscarls, while William's thegns, to my right, overcame their fear of the Vikings, broke their shieldwall and charged impetuously up the hill towards the waiting foe. 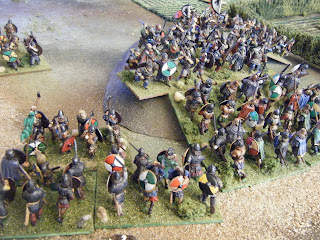 Despite the odds, the thegns managed not to lose that combat. Meanwhile, the Vikings did not fare well against my huscarls. In fact, they broke and ran... inciting panic in much of the Viking center. Including the troops on the hill, despite the presence of the Viking chief, who was promptly dubbed "Ragnar Brown-breeks." 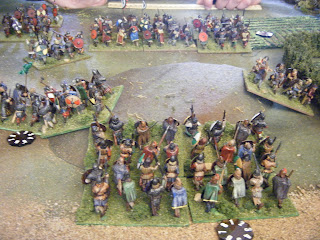 "Wait, come back! We haven't finished stabbing you yet!"

It took two turns for their leader to stem the rout, and by that point a number of the lesser troops had fled the field and we had gained a good deal of ground on the right flank. On the left flank, however, things weren't going so well--a group of my scruffy fyrdsmen had routed after attempting a similar charge up the hill, and were overrun by pursuing Vikings. My better-equipped thegns were similarly repulsed, and narrowly escaped being run down themselves, despite the presence of the Eorl himself. 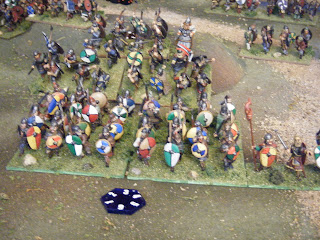 Vikings in hot pursuit of my thegns.

Fortunately we were able to turn and rally before the Vikings slammed into us, and a protracted melee developed. Our long spears, deployed in depth, were beginning to give us the advantage, when events on the other flank intervened. 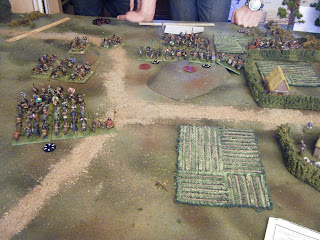 Melee on the left. The Vikings on the right have stemmed the rout, and are facing our thegns and huscarls again.

A large group of fyrdsmen had been making their way through the village off to the right, despite some opposition from a band of bow-armed Vikings. It was about at this point that they finally emerged from among the huts and hedges, uncomfortably close to Ragnar Brown-breeks' left flank. Finding himself rather outnumbered, Ragnar decided to break the standoff that had been developing over the past few turns, and to charge our shieldwall of thegns and huscarls. This didn't work out too well, and his troops fled the field. Although the other Viking commander still had most of his forces intact, at this point it was decided that Saxon arms had carried the day, so we packed it in. 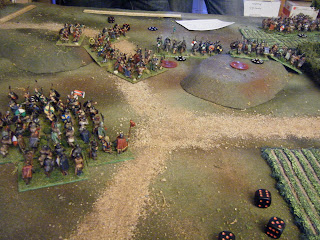 Field at the end of the battle--there's a Viking column coming up the center that didn't quite make it to the scene of action in time.

Overall, it seemed like a pretty good game--though we did get a lucky break early on, for a while it looked as though things were going to swing back the other way. And while we glossed over some aspects of the rules, it was good to brush up on the basic WAB mechanics again.

And next, off to Maine, where we will join forces with the redoubtable Ross Macfarlane for Huzzah! (Well, technically we leave Thursday, but I don't anticipate much happening in the miniatures line over the next few days...)
Posted by Norman Dean at 8:36 PM