The same caveats hold here as with I-IV.  These maps are fictional, do not depict real history, and should not be used as resources, nor are they intended as a political statement about the inhabitants of any given piece of land, now or at any time in our past.


First up, a couple more maps of an alternate West Africa--actually the same setting as the last map in part IV. I had some fun playing around with somewhat different techniques on these: 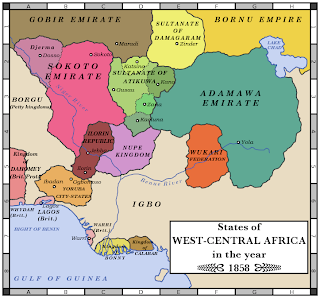 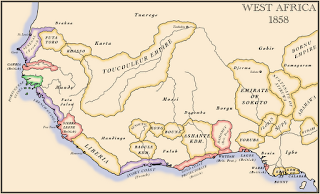 Next up is actually a future history map, rather than alternate history, showing settlements on Mars. A few of the ideas here are actually ones I've had floating around for a couple of years; I was idly considering using them in the background of a roleplaying game at some point, but never got around to it.

Two centuries in the future, the Solar System is slowly being colonized as advances in superconductors allow ships to "sail" between planets, borne on the charged particles of the solar wind. Humanity has once again entered an age of exploration and colonization, and the great powers of Earth--national, supranational and corporate alike--strive to lay claim to the resources now within their reach.

Mars remains an uninviting place, despite the terraforming plans being laid out by the Long Run Foundation, but many of the great powers have planted a few token colonies--many of them having grown up around early scientific bases or research stations, others exploiting the planet's mineral resources. For some smaller groups, Mars offers  the chance to build a new society away from the prying eyes and laws of Earth. Many of these stake out claims in the "International Territory" or cut deals with the major powers--or simply squat on others' turf, gambling that no one will care enough to evict them.

But a few have come to the Red Planet against their will. Several decades ago, the European regime saw an opportunity to finally deal with some of their troublesome minorities--and so thousands of Basques and other "undesirable subnationals" were given the choice between increasing persecution on Earth or freedom on Mars. Those who chose Mars have done their best to forge a new nation for themselves, and recently have thrown off the yoke of the "Martian Resettlement Supervisory Council," proclaiming themselves the "Basque Republic of Mars." 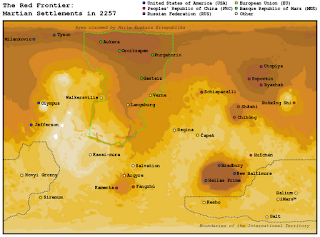 The last one of this batch was inspired by reading up on the Samaritans, who still exist today as a tiny minority in the Levant. What if things had gone more favorably for them?

Cyrus the Great decides not to release the Jewish people from their Babylonian exile, and only a few end up returning to the land of Judah. Instead, over time the religious composition of the Levant shifts towards the Samaritans, a Hebrew-speaking ethnoreligious group descended from the northern kingdom of Israel, with their own version of the Torah and their own holy site of Mount Gerizim.

The Achaemenid Empire dominated the Near East for several centuries, and at times exerted some measure of control over the Greek mainland. As a result, Magna Graecia saw a bit more immigration, and a Greek-speaking polity in Sicily was for several centuries the major rival of the rising Roman Republic for control of the Western Mediterranean before being overcome.

The Roman Republic of this world had little in common with that of ours, being in some ways both more and less Hellenized, but over time it acquired significant eastern territories from a variety of Achaemenid successors, including a largely Samaritan "Kingdom of Israel." The Samaritans got along somewhat better with their new overlords than the Jews did with the OTL Romans, and were not scattered across the Empire. Neither do they spawn any sort of spin-off interested in converting large numbers of Gentiles; Samaritanism remains strongly linked to its homeland and its holy places.

Fast-forward a couple of millennia. Rome is long since fallen, though its influence remains in many nations of the Mediterranean, even those overrun by Celts, Germans, and various nomadic peoples. The Near East was, for a long time, split between an Egypt-based Roman successor, and a resurgent Persia, with Israel usually falling under the sway of the former. But in recent centuries, the diverse states of western Europe have been experiencing a scientific and industrial revolution, while the empires of the Near East have fallen behind. Persia has retreated into a state of semi-isolation, while the last dynasty of Egypt has been overthrown: without them, the lands of the Levant have been splitting apart along ancient ethnic and religious faultlines, and a Samaritan state of Israel has emerged once more.

And in the unremarkable provincial town of Yerushalem dwell the last members of an obscure and dwindling sect known as "Ezraic Samaritans," or "Yehudim," of interest only to a few ethnologists... 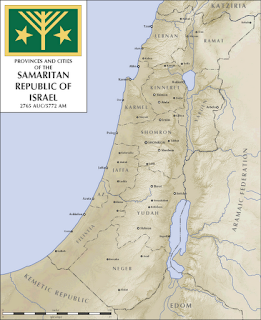 And that's it for now! Time to go paint some chariots...
Posted by Norman Dean at 10:03 AM