This past weekend Dad, William, and I made our way up to Portland for Huzzah!, the convention of the Maine Historical Wargamers' Association, where we met up with Ross MacFarlane, of Battle Game of the Month. Quite a drive for us, living in Maryland, but an excellent convention, with lots of great games to see and to play in.

We left Thursday morning, a few hours later than we'd hoped, and got into Portland about 8:00 or 9:00 p.m. that night. The hotel where the convention was held was conveniently located just off the highway, though we still managed to miss a turn on our first attempt to find the place. Upon arriving we found that each guest was given a complementary Whoopie Pie, which definitely is a plus in my book. (For anyone who doesn't know what a Whoopie Pie is, it's a sort of soft round sandwichy chocolate thing filled with fluffy marshmallow stuff, and is nothing at all like a Whoopie Cushion.)

Games were not scheduled to start until Friday evening, so the first part of the day was set aside for some extracurricular gaming and sightseeing. (Actually, sights were a little hard to see given that it was raining, but we did go down to the waterfront and feed William his first lobster.) The first game we set up was a trial of the popular Basic Impetus rules, with figures pulled together from Dad's selection of 6mm armies which we'd brought along. Ross was familiar with the rules already, so after a quick briefing on the mechanics, he and William led an army of late Imperial Romans up against a force of 'Visigoths' (actually Franks, but at 6mm scale who can tell?) led by Dad and myself. We were favorably impressed by the game, and the Visigothic victory was a very near-run thing; one of our double-sized warbands managed to fend off two flank attacks from their heavy cavalry to pull off a win. 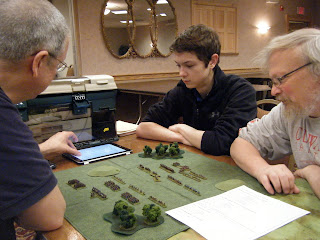 Before the game, trying to scrape together two matching Impetus-sized armies. 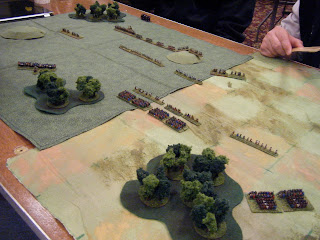 Sometime in the first few turns. The Romans got to set up second, which seemed like a pretty big advantage--we probably shouldn't have left our cavalry unsupported on the left like that, as they were able to concentrate on them first. 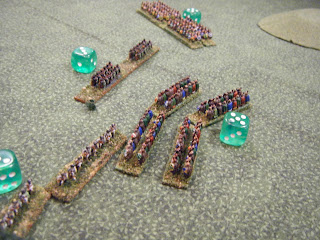 Near the end of the game--our masses of infantry threaten to overwhelm the second Roman legion. 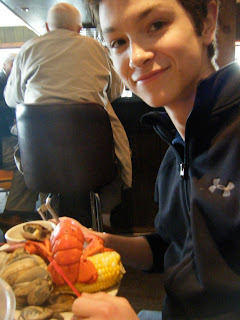 William and his crustacean.

After lunch, we came back to the hotel and set up another pick-up game, this time a playtest of the Renaissance game that Dad and Ross would be running on Saturday. William and I took the English, who were trying to retrieve one of their large guns that had gotten bogged down. Unfortunately, while we were mostly able to hold off their cavalry on the wings, the French pike block reached the center before we could get the gun dragged away, and we really didn't have enough troops left to chase them off. 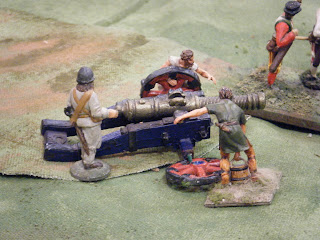 The cause of all the trouble. 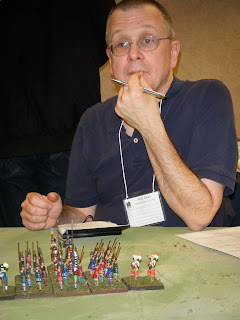 The French commander, considering his options. 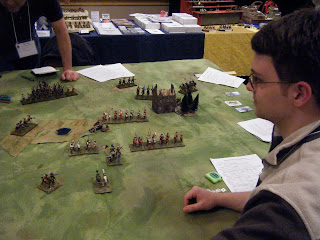 Me, possibly wondering what William's up to on the left flank. 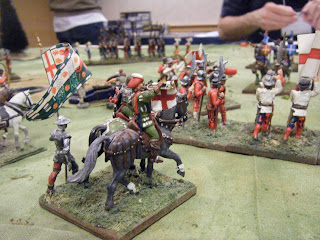 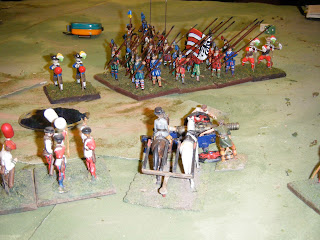 We got the limber to the gun... 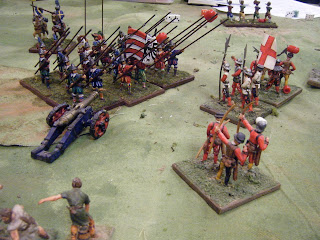 But it wasn't enough.

After a quick dinner at Panera Bread across the street, we came back for the first round of official games. William and I had signed up for a what-if scenario featuring a 17th century Anglo-Dutch conflict in the wilds of New England, using one of the versions of the Gaslight rules, which we're pretty familiar with. The Dutch forces were entering over the bridge on the left end of the table; one English player had a force of cavalry and musketeers positioned on a hill overlooking the bridge, while William and I as the other English players marched up the road to his aid. As it turned out, we needn't have bothered--the other English player sent his cavalry charging straight into the Dutch column the first turn, starting a melee that lasted much of the game and kept the Dutch thoroughly occupied. (I think there may have been an issue with how morale was being done, but the Dutch players were rolling very poorly, so I'm not sure how much it really mattered...) Some of their native allies sniped at us from the woods for a while, but I'm pretty sure I neither suffered nor inflicted a casualty all game. Still, it was a very neat set-up--I wish I'd taken a picture or two of the Indians, who were very well painted, and William and I spent some of the time tossing around the idea of doing a similar game, possibly based on one of the odd little episodes of Maryland history--the Battle of the Severn. 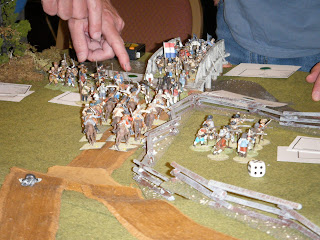 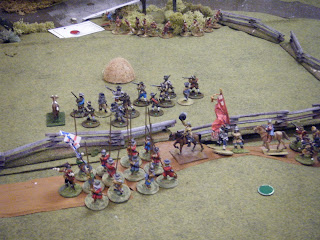 Marching down the road. Unfriendly Natives are visible along the treeline. 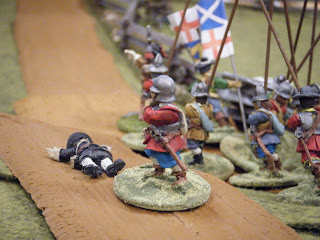 Investigating a dead body that had been left in the road.

The next morning, moving forward in history I ended up in the Battle of Brandywine, as the American commander, with Ross on my right (possibly lured in by the 40mm figures) and a rather enthusiastic child on my left. The rules seemed to be based on the Battle Cry/Memoir '44 family of board games, with which I am somewhat familiar, and which made it a bit easier to pick up. I spent much of the game keeping an eye on the situation to the left--the kid was in a tough position, trying to hold off a strong force of British and Hessian regulars with a force that contained a lot of weaker militia units, but he managed to do pretty well. On the right, the British had executed some sort of flanking maneuver--I wasn't paying as close attention to the action, but it seems they were hindered by Ross's sharpshooters, who potted the British commander on that flank. In the center, I was able to spend much of the game sitting on a hill and exchanging artillery fire with William, but I did have to fight off an assault from his troops at one point. This game also went down to the wire, but we squeaked it out--the kid managed to hold off another charge and destroy the attackers to get the last victory point. 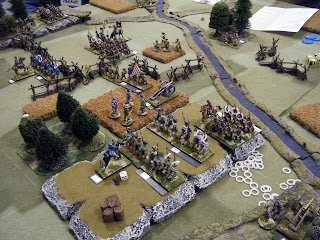 Sometime near the middle of the game--William is charging up the hill against me; the British are pressing forward against our left.

Saturday afternoon, I played in a Boxer Rebellion game, leading part of a naval landing force sent to capture a Chinese arsenal. The scenery on this one was great, and the rules were simple and bloody. While we came pretty close to achieving our objective, and even managed to hold the arsenal for a few turns, in the end the Chinese cannons really wore us down, and the handful of survivors had to make their way back to the ships. 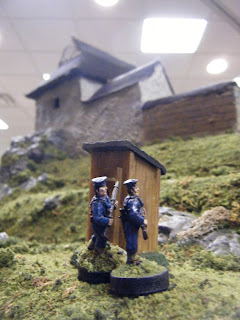 A couple of fellows make a quick stop on the way up to the arsenal. 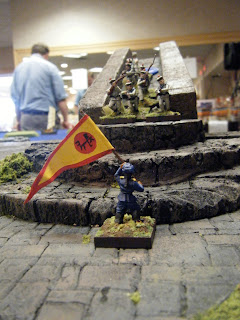 The only survivor from his unit, he spent the rest of the game training with an old kung fu master to one day take revenge against the foreign devils. 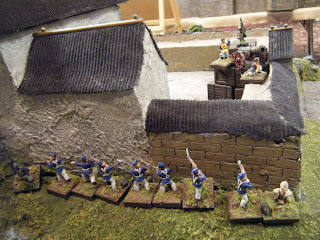 Preparing to go over the wall.

The last game I played in was a Punic War naval battle on Saturday night. This was very interesting, as while I'm sort of aware of the basics of galley combat, I don't think I've ever played a game of it before. The scenario involved the Carthaginians trying to get a merchant convoy past a Roman blockade.Both sides ended up basically splitting their forces into two groups--a larger one and a smaller one. I was on the Roman side, commanding the smaller force--two squadrons of quinquiremes, relatively heavier ships, and I ended up facing off against the larger half of the Carthaginian fleet--two squadrons of quinquiremes supported by two more squadrons of the lighter triremes. I knew that my ships would be at the advantage in boarding actions, but I wasn't really able to set many of these up--my bigger, slower ships kept getting rammed by the fast Carthaginian triremes with their veteran crews. (Turns out I'm really bad at noticing when I'm about to be rammed and reacting accordingly.) Still, my first squadron managed to break through their line and make for the merchant ships--and we had just managed to grapple one when we had to call the game. Luckily, the other part of the battle had gone much better for the Roman side, as the Carthaginians had gotten penned in between some smaller islands and the main coast and the main body of our fleet was positioned to wreak havoc on them. So over all it was a victory, as we prevented the convoy from reaching the city. All in all, a very interesting game, though I may look into something with a few less tables if I ever want to do something similar. 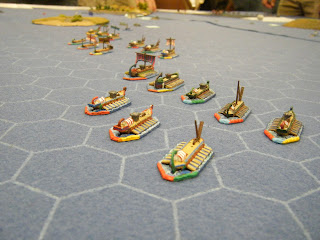 Nice, neat Roman lines at the start of the game. 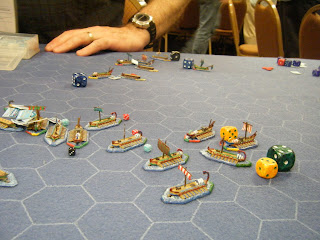 My part of the action towards the end. When you can't see your ship under piles of chits marked "Fouled" or "Grappled" or "Crippled," you may be in trouble...

Overall, Huzzah! was a great experience; I'd definitely do it again if the opportunity presented itself. I got the chance to play in lots of great games, and the whole thing seemed very smoothly run. Just to wrap up, here's a few more pictures, including ones of games I didn't play in... 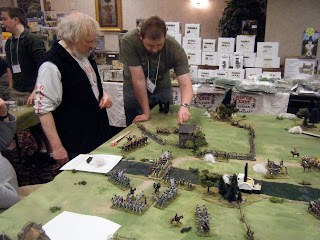 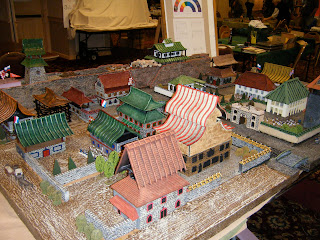 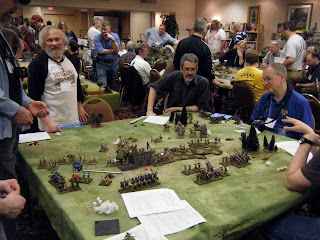 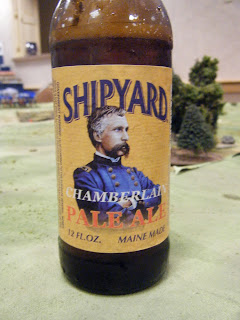 The official sponsor of Huzzah!, apparently.