A rite of passage (and more chariots)

Every so often, when I gripe about the non-availability of figures for some aspect of history, Dad will remind me of how easy I have it and how back in the "old days," most 1/72 scale figure manufacturers didn't exist yet, and how people had to build entire armies out of Airfix Robin Hood figures, eked out with the occasional elephant.

Well, now I've done it myself--not an entire army, but I have done up one unit's worth of conversions, (with a second in the works) which I think is a reasonable start. As you might have noticed if you've been keeping up with my last couple months' worth of painting, I've been working on expanding my Bronze Age project (in 20mm plastic, of course) using mostly Caesar Miniatures' various sets of chariots and whatnot. One thing they lack, however, are some generic scruffy infantry types suitable for Canaanite, Syrian, and Mitanni armies--and so I turned to the Airfix set. (I'm not the first to do this, by the way--I was inspired by another wargamer-blogger, whose handiwork can be seen here.)

Anyway, I trimmed their weapons, carved away their hoods, drilled out their hands and gave them brass wire spears, equipped them with simple rectangular shields, painted on some headbands, and voilà! Scruffy Bronze Age spearmen! 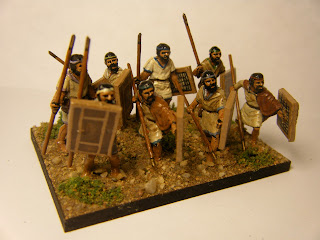 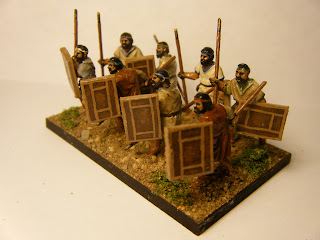 And of course, more chariots. The first of these is something a little different--between my figures and Dad's, we've got a pretty sizable contingent of Sea Peoples by now, and I figured they deserved a chief. So here he is! 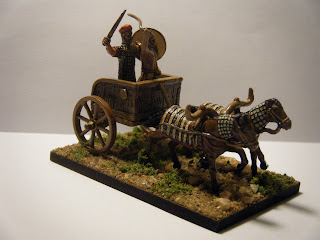 As for what the figures are--well, that's an interesting question. The chariot itself is one of Caesar's Hittite Chariots, but the horses are from the Mitanni chariot set. (They've had their plumes cropped off.) The driver is straight out of the Sea Peoples set, but the warrior in the back is more interesting: his head and arms are Sea Peoples, but the armored torso is from the Mitanni chariot driver. 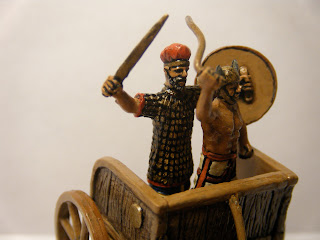 And lastly, we have the second of my "Assyrian" chariots. Yes, that is an ostrich painted on the sides--it's drawn from this Assyrian seal imprint. The crew and horses are from Caesar's Assyrian chariot set. (Fun fact #2: I realized after painting them that the green and yellow checker pattern on the horse barding is suspiciously similar to the pattern on the curtains in the room where I paint.) 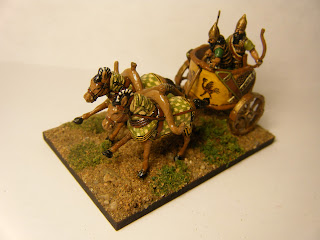 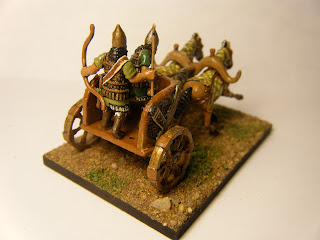 One more stand of scruffy spears, two more Assyrian chariots... and then maybe I'll paint something else for a while. We'll see.
Posted by Norman Dean at 8:55 AM