It's not often, but every once in a while I get the urge to do some drawing. This time, the catalyst was a work called Lands of Red and Gold, over at alternatehistory.com, which imagines a world where Australia developed agriculture and native urbanized civilizations of its own. After reading through all this, I got to imagining what some of the people might look like, particularly the soldiers of the various cultures. (Well, I am a wargamer, after all. (That reminds me, I should look around and see if anyone has sketched out DBA army lists for the Aururian civilizations yet...)) 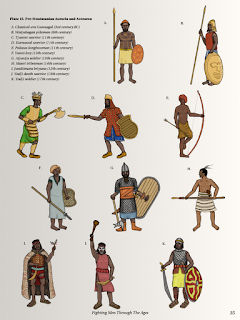 Anyway, this is the resulting product--I drew the people by hand, then scanned the drawings and colored them in using GIMP.

(And now, with that out of my system, I can get back to painting chariots...)
Posted by Norman Dean at 9:16 PM