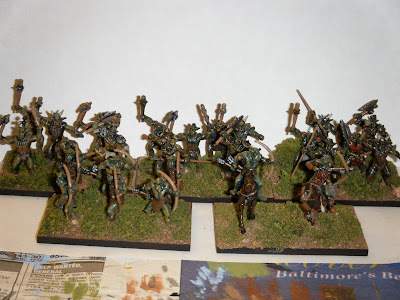 Orcs! Yes, this staple fantasy army has worked its way up to the top of my to-do pile. I did up a couple of stands of Caesar Minatures' Orcs in the past, but what good are just a couple of stands? Orcs really cry out to be deployed in piles and piles, and while my supply of paintable orcs is limited, it should at least stretch to cover a Hordes of the Things army. And with this week's painting, I'm now about halfway there. (At least when one counts their potential Beast allies that I did back in January.)

I'm not going to dwell on the foot, since one warband looks pretty much like another (especially when they all contain the same five or six poses) and to be honest, the painting is not exactly at my highest level, but here's a closer look at the riders: 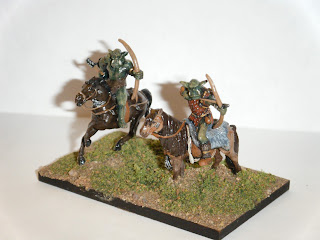 (Yes, I nicked the idea from Paul of Paul's Bods. Always borrow from the best!) I realized I was going to end up with some extra archers, and I have a few spare Mongol horses lying around, so with a bit of trimming I managed to turn out these guys. There'll be a second stand eventually, but I'm not quite sure whether I'll use the same poses or try to switch it up a bit. Some might ask whether orcs ought not to be riding wolves instead, to which my reply is that it's much easier to find little plastic horses than little plastic wolves of the proper size. Besides, this way I can easily distinguish between Beasts and Riders for HotT purposes.

Anyway, I have the rest of the Orcish army pretty well planned out. Evidence would suggest that this means I'm about to move on to something else and this is the last you'll hear of them for a few months.

(Actually, if I move on to something else, there's a good chance it might be the long-awaited second squadron of Wachovian Hussars. I've had NQSYW on the brain lately, and Dad's running some games at Historicon...) 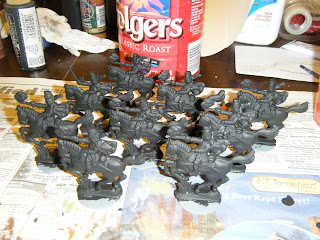